4 Middle East and Africa Contenders for the Immortal Awards 2021

As the global final inches closer, LBB’s Natasha Patel spoke to the minds behind the MEA finalists 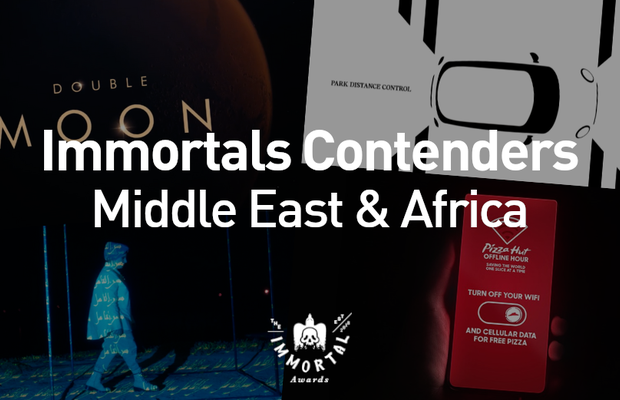 12 became four in the Middle East and Africa round of this year’s Immortal Awards when the local judging event took place last month. The four pieces of work that went through were deemed worthy by the local jury of having a chance to attain an ‘immortal’ status. Now that the countdown is on for the global finale, LBB’s Natasha Patel caught up with the creative minds behind the MEA finalists on why they think their work left a lasting impression.

“In Arabic, the word menopause does not exist. Instead, for hundreds of years it has been labelled by society as the ‘Age of Despair’. The creative idea around that insight was born out of a larger challenge of how to get a target audience of 50+ year-old Arab women to know about an incontinence product. In a light-bulb moment, we simply asked Arab women to decide for themselves what menopause meant to them. This invite – disseminated through an unconventional audio and social campaign - resulted in thousands of submissions from women across the region, driving conversation not only around menopause but more importantly, establishing the groundbreaking fact that women were going to decide for themselves how they felt about it.
“We were lucky to have a bold, courageous and creative-hungry client on board, one who supported us all the way through. The UN endorsed the movement, and the public reaction was overwhelmingly positive: we were featured in every large publication in the Arab region, our work was highlighted in Vogue Arabia, and even referenced in a New York Times article around the struggles of menopause. Influencers who were not even commissioned by the brand reposted our message, joining in on the conversation. Real change happened when the largest Arabic dictionary in the region changed the term to the one brought forward by our audience. For millions of women, menopause in the Middle East is now known as the ‘Age of Renewal’.” - BIG KAHUNA FILMS

“Offline Hour started out as a ‘we just want a social post’ brief. Pizza Hut just wanted something to encourage people to switch off their lights for an hour. But instead of limiting it to just a piece on content on Facebook or Instagram, we wanted to participate in a more meaningful way. We saw that a few brands held live streaming events online during Earth Hour to encourage participation. Even WWF did it. Which made us question whether or not switching off the lights had an impact at all if people were just going to go online anyway.
So we did some digging and found out that, in the US alone, the networks and data centres that power your social media, messaging services and streaming video consume eight billion kWh more than household lighting annually. So by encouraging people to go offline for an entire hour they would save more energy than switching off the lights. And get a free pizza in return.
The website was just had a clever bit of code that detected whether or not the viewer had an active internet connection or not. If their connection was active (i.e. their WiFi or data was switched on) then it blocked content on the website from loading. Once the website detected no active connection, then the content would appear. All the content was preloaded while the user was online, but we made sure the file sizes were small so that it didn't take up too much data. I think the tech and the purpose behind it is what resonated with the jury. It's probably the first time they've seen a website that actually asks you to switch off your data or WiFi to view its content, but it also makes you think of the impact your digital footprint has on the world as well. We are championing this to be the new Earth Hour mechanic so watch this space for more…” – Ryan Reed, CCO of M&C SAATCHI UAE

“MINI has always stayed true to its roots: a simplistic, iconic design with outstanding longevity that inspires fans to this day. Today’s MINI models offer more than just an efficient and creative way to get around. They are technology-packed with state-of-the-art safety and comfort features. This is well known to MINI drivers, but not so much to people outside of the car’s fanbase. So, we tried to create a visual experience to make MINI appealing even for other car fans, who might not be familiar with its heritage and what the brand truly stands for: an urban lifestyle with maximum experiences in a minimal space.” - Tudor Cucu, senior art director and Kunal Gagwani, art director at Serviceplan Middle East

“What makes an idea immortal? Well, to start with, it needs to transcend advertising and capture the public's imagination. Plus, for me, it needs to be a sublimely simple idea - as all the best ones are. From the moment I reviewed the idea, I was convinced that Double Moon ticked the 'brilliantly simple' box, and I had a pretty good gut feeling it had the power to capture not only the regions' imagination but maybe the worlds too, which was ultimately our brief.
"The UAE is a highly progressive country, and it's achieved more in its first 50 years than most countries have done in their previous 100 or more. So, it came as no surprise to me when we got briefed on the UAE's Mars Mission. To date, only six countries have visited the red planet btw. Our job was simple, make Hope Probes arrival at Mars famous and, if possible, a global news event.
"Now I love tech when it isn't just used just for tech's sake. So, when we reviewed the idea, we all said (including the client) that this is a brilliant thought on paper that packs the same sort of power and intrigue as the likes of other immortal campaigns, such as Bentley Burial - one of my all-time faves. But we're all like, how is this possible? Can this be done? How can we realise this idea? Yes, projection mapping isn't new. But projecting mapping something into thin air isn't so straightforward. But a few days later, and after a lot of research, we discovered a fledgling company in Scandinavia that had recently developed a new innovative gauze net that could do what we wanted.
"Next, we simply scouted the perfect location on Dubai's outskirts, where we knew people would stop and wonder WTF… is that!! Then we hired two gigantic, rather expensive cranes that could hold the effectively invisible gauze net up at the height of around 100 meters - basically higher than a small skyscraper. Then we simply turned on six state of the art high powered projectors to bring Mars's two moons (Phobos and Demos) to earth in stunning high resolution - the perfect ruse for capturing social media and the internet's attention overnight.
"Once half of the country, including local and global news and radio outlets, plus my fave part of the entire campaign - many global UFO's conspiracists had crawled out of their backyard bunkers and piped up with dozens and dozens of wild, hysterically funny and completely incorrect theories. We finally revived the truth, uncovered the mystery, and drew everyone's attention to exactly where we wanted it - The UAE's Hope Probes arrival at Mars.
"An immortal moment in the UAE's young history? Undoubtedly. An immortal idea? I'll leave that up to all the judges to decide.”  - Paul Banham, regional ECD at Mullenlowe MENA