As the countdown to the global final is continues, LBB’s Natasha Patel speaks to the minds behind the five finalists from APAC 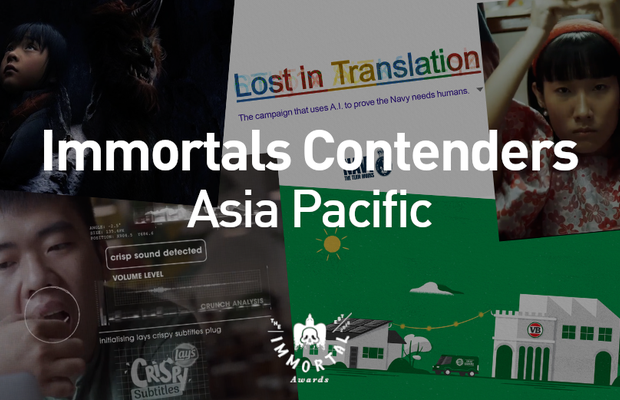 When 24 became five during this year’s Asia Pacific round of the Immortal Awards, we knew we were in for an exciting finale. The spots chosen by the expert panel to go through from China, Australia, Thailand and Vietnam all represent the region perfectly and cover everything from festivals to social media and sustainability.
With the global final coming at us fast, LBB’s Natasha Patel caught up with the creatives behind this year’s final from the region to hear why they think each spot left a lasting impression.

“In the 4th year of the Chinese New Year Shot on iPhone campaign, we wanted to achieve something bigger, more ambitious. Our love letter to China had to be monstrous.
“The result: a 12-minute fantasy film shot entirely with practical effects. ‘Nian’ is our take on the tale of the eponymous terrifying monster. When a young girl sets off in search of him, she discovers that there are some truths worth seeking out for ourselves. ‘Nian ‘inspires audiences to embrace the unknown.
“However, our monster film would face a monster of its own: the pandemic. Despite everything we didn’t know about Covid, we truly believed our story could inspire courage in these unknown times.
“With our director, Lulu Wang, and her team denied entry into China, we implemented a first-of-its-kind mirror production, meaning two crews mirroring between LA & China. Director to director, cinematographer to cinematographer…etc. This meant an added challenge to find a shoot location that could sustain a stable network to support the back-and-forth communication.
“But it was our hand-crafted, tailor-made monster suit getting trapped in customs that really fueled our fire. Our teams had worked tirelessly on the 3D scans of our actor, rendered in China and sent to the remote designers in Hollywood, where every strand of fur was individually hair-punched to give an organic feel that would blend into his environment. And every strand was worth fighting for. He was re-routed, not once, but twice, across three countries, finally landing safely for shooting.
“With the same passion and perseverance as the brave girl in our film, we tackled the unknown head on. There’s much to fear, or so we’re told… but if we could get people to fall in love with a monster, what will we do next…” - TBWA\Media Arts Lab Shanghai

“The VB Solar Exchange was one of those wonderfully difficult projects that required the whole team to constantly develop new skills to overcome each obstacle that popped up along the journey. I’m pretty sure the account director is now a qualified lawyer and blockchain expert as a result.
“I think the concept resonated with the judges because it’s a simple, fun idea that proves the unexpected value brands can bring to their consumers' world if they think outside of pre-existing business models. Not to mention, the idea also pioneers a sustainable e-commerce future, where brands not only sell to their consumers, but are completely powered by them too. Who knew that a beer from Australia could give ‘people power’ a whole new meaning?” – Jim Curtis, ECD at Clemenger BBDO Melbourne

“Alcohol advertising is highly regulated in Thailand, a heavily Buddhist country. Brands cannot talk about the quality of the product. Kulov Vodka is smooth and superior and known for its six time distillation process (but we cannot say this). So we found a way to tie in the product message with a social insight. The message is simple: the more you distill, the better the result. This is the same for social media posts. Because we've all experienced 'undistilled' posts that can lead to drama. This is the story of Kulov ‘6 Takes Of Drama’ - before posting, distilling your thoughts (six times) can help you avoid drama.
“It's a simple enough message that everyone can relate to, especially now when most people often use social media platforms to communicate. And it's of good intention because of the common social bullying issues nowadays. I think the film's entertainment value comes from a combination of storytelling, use of a famous rock song, the visual style… all based on a relatable insight.
“I hope this piece of work can appeal to more people and show that good creative work can still be done - no matter what, even if there are restrictions.” - Asawin Phanichwatana, deputy CCO at GREYnJ United

“Lay's Crispy Subtitles has been a passion project our whole team had been working to bring to life for so long out of pure love for creativity and the power of the idea. It's projects like this that many of us on the team are in the industry for in the first place. To launch it was rewarding - to see it get picked up around the world was beyond what we expected.
“We think this resonates well because of how lighthearted and fun this project is, while still coming from a true insight. It's hard not to smile when you hear about this idea... And maybe there isn't enough of that out there right now.
“For the future we are excited to see how other teams will continue to push what we all get to make in this great industry and inspire.” - Nick Stillittano, creative at Happiness Saigon

“When we created this campaign to recruit Cryptologic Linguists - whose primary job is to translate languages – we naturally started by playing around in an online translation tool.
“We began by feeding in famous quotes, nursery rhymes and song lyrics to see what hilarious mistranslations we could find. After a bit of trial and error we found consistent gaps in the translation algorithm, and in those gaps lay the comedic gold.
“Lost in Translation is one of those ideas that slips around every time you try to pin down exactly why it’s good. Which is a great thing for a jury to have to deal with.
“It cheekily gives you just enough info to allow you to recognise different songs and phrases – and in that moment we smile when it all clicks into place. It’s also got a bit of technological satire going on that makes us feel in control of our humanity and not subject to the whims of our gadgets (my apologies to our future robot overlords).
“To be one of five finalists for APAC and the only one judged without a case film speaks to the real purity of the medium and the impact of the concept. We couldn’t be happier with seeing a resoundingly simple and effective piece of work receive this recognition.” - Kieran Moroney, creative director at VMLY&R Melbourne