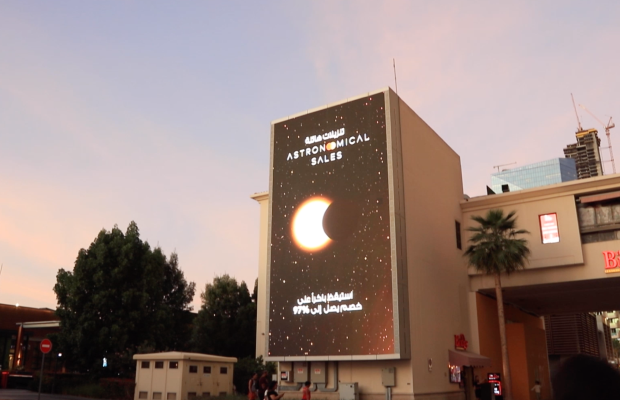 What’s striking about the finalists that came through the MEA heat of Immortals judging is the work that didn’t make it. This was a jury that was thoughtful, considered and forensic as they sifted through a particularly strong shortlist from a region that isn’t afraid to use creativity to address huge issues, while also showcasing great creative thinking, storytelling and work that aims to get people moving.

“Journalism’s role in society is to inform the public. An-Nahar newspaper took it a step further: we not only informed, but motivated and inspired the public to create positive change for the nation.
“Lebanon, in the midst of yet another upheaval, needed a solution to ensure that the revolution did not become as violent as the ones in the past. Our answer was to motivate and mobilize the one group that would ensure peace: Lebanese women.
“To get women to participate and lead the revolution, we needed to make them feel like they were an integral part of the nation – a nation where women are so underrepresented, that even the Lebanese national anthem fails to mention them.
“So, in a bold move, we shocked the country by rewriting the anthem. While it previously read ‘the birthplace of men’, we changed it to ‘the birthplace of women and men,’ and printed it on the cover page of the newspaper, dedicating the entire edition to women for the first time.
“As a result, women not only led the revolution peacefully, but increased their numbers in government.
“This wasn’t just a campaign, it was an immortal gesture to influence an impactful, positive change forever.” Ali Rez, regional executive creative director, Impact BBDO

“The Snickers You’re Not You When You’re Hungry campaign has already proven to be immortal, running now for more than 10 years.
“But this poses a challenge in itself – how do you ensure that the campaign remains fresh and unpredictable year after year, and finds new ways to communicate the brand promise?
“How do you maintain the campaign’s immortality, and build on it?
“Hunger Insurance is a first-of-its-kind ad campaign, in that it isn’t really like an ad campaign. It’s an insurance policy. And that too a first-of-its-kind insurance policy that pays you back in Snickers bars for the blunders you make when you’re hungry, delivered with a novel application of the use of data and AI.
“Because of course, as we have demonstrated over the years, we understand that you’re not you when you’re hungry.
“There’s an immortal human truth in this campaign: we all make blunders when we get hungry, but who wouldn’t want to be protected for it with delicious Snickers bars as a payout?” Ali Rez, regional executive creative director, Impact BBDO

“In the last couple years I’d worked on a few campaigns for local fashion retailers. I’d begun to ponder the tone of most fashion advertising. Why couldn’t it be concept-based? Why couldn’t it be funny? How about an engaging, stylish, darkly amusing tale where the clothes were integrated seamlessly…being key to the plot? No one needs to see more ads of people posing against a graffiti wall, holding flares or staring humourlessly into camera.
“The resulting Shelflife Nike x Stussy film I created…encompasses this headspace. Myself and the client are very proud to have struck a chord with consumers by bucking the trend of rapid cutting, flash frames and shifting formats and creating a piece of communication that is slower, aesthetically bold, hypnotic….and funny, in a smart, off-beat way.
“I always wanted the clothing to be vital to the storytelling; key to the humour, key to the idea – but in a playful way, it's very meta. The clothing completes the jokes, threads the narrative together. It was a challenge to make it all feel seamless and singular. It’s fresh, disruptive in the category, a fine balancing act….and therefore deserves to be Immortal!” Marc Sidelsky, writer/director, Massif Media

“In creating The Zikrayat Playlist, the Alzheimer’s Association Lebanon and Cheil UAE created a natural and organic Alzheimer’s disease management tool that lived on a massive and free music streaming platform. Anghami.
“Its value is in its simplicity, accessibility and impact. It’s a model for music streaming platforms to adopt and make available for their millions of users; the ability to automatically generate hit music playlists that are relevant to Alzheimer’s patients based on their date of birth and origin (is this case, the Arab world), to help trigger memories and reduce their stress.
“It’s stunning that this automated tool didn’t exist before that, making use of the power of music in helping the people who need it on a free and mass scale. Doing that for an association, with whom we’ve had a long history, was personally satisfying because we were able to achieve exactly what they wanted to achieve; being there to support and help out sufferers, their families and caretakers.” Ramzi Ibrahim, creative director, Cheil Worldwide Dubai

Almosafer - As Far As We Go

“The Middle East always does a decent job of marketing brands during Ramadan. But, unlike Christmas, it has never done a good job of marketing Ramadan to the world. With As Far as We Go, in today’s divided and divisive world, we didn’t just market during Ramadan, we marketed Ramadan to the world.
“The biggest challenge was to have a brand in the Middle East (a Saudi brand!), believe in an idea that brought Santa Claus (a symbol of Christmas) into Ramadan (the holy month in Islam). We heard a lot of scepticism when we discussed the idea amongst industry kin, marketers and media, as they felt it’d be offensive and lead to divisive opinions. Many stated it was blasphemous and they’d never do it. But, we’re glad Almosafer chose to make such a meaningful statement and the results justified their faith in the idea. People have loved it and it hasn’t been divisive. In fact, it is being touted as one of the best Ramadan ads ever, globally. Watching the entire industry applaud it during its three Gold wins at the Effies was a beautiful moment. It transcended agency rivalries too.
“And that’s why it deserves to be immortal.” Tahaab Rais, regional head of strategy, FP7 McCann

“Most brands have, at some point, claimed to launch ‘the sale of the century’. But with Astronomical Sales, Mastercard was actually telling the truth. In fact, it took 172 years for the earth to present this perfect promotional opportunity wherein the Mastercard logo was painted in the sky.
“During the eclipse, 97% of the sun disappeared. For this reason, 97% of the price disappeared on a range of products sold by the region’s biggest online retailer, noon.com. When the eclipse started, so did the sale. As the sun diminished, so did prices on the website (noon.com), reaching discounts of 97%, and returning gradually to full price. And to those who purchased at the exact moment the eclipse formed the Mastercard logo, priceless prizes were awarded.
“The promotion, that took place in a majority ‘cash-on-delivery’ online market space, saw upwards of 18 000 Mastercards registered on noon.com, and Astronomical Sales registered phenomenal results, even though the promotion ran from 6:30 to 8:30 am on 26 December – a period known to most retailers as dead season.” Fouad Abdel Malak, regional executive creative director, FP7 McCann

“Donner Sang Compter (DSC) is the biggest Lebanese NGO that promotes voluntary blood donation. But, in Lebanon, donated blood is never enough. Compounded by the fact that there is no central blood bank and political strife, patients in Lebanon are forced to turn to social media in desperation.
“Donner Sang Compter wanted to create awareness about the importance of giving blood and wanted to encourage people to do so, but the big challenge was to break through on a low budget, in a cluttered media landscape and a politically and religiously-charged, war-stricken country.
“We chose the Day of Ashura to launch our campaign – it’s a day of public mourning when Shia Muslims in Lebanon commemorate the death of Imam Hussein by spilling their blood in public. We used this occasion to divert crowds of the faithful to DSC blood donation stations and mobile vans under the title of Blood Unity, actively encouraging them to donate their blood instead of spilling it.
“The campaign saved many lives and reduced the number or participants in this archaic and outdated tradition from 1000s to less than 800. For the first time in history, a blood donation campaign gained religious support from the nation’s top religious clerics, who actively urged their followers on social media to donate their blood. The campaign went on to be covered by Christian and Muslim channels, wherein everyone put aside their differences for a change, to help lay the foundations for the nation’s first ever National Blood Bank.” Fouad Abdel Malak, regional executive creative director, FP7 McCann