A Night of The Unexpected by HSBC 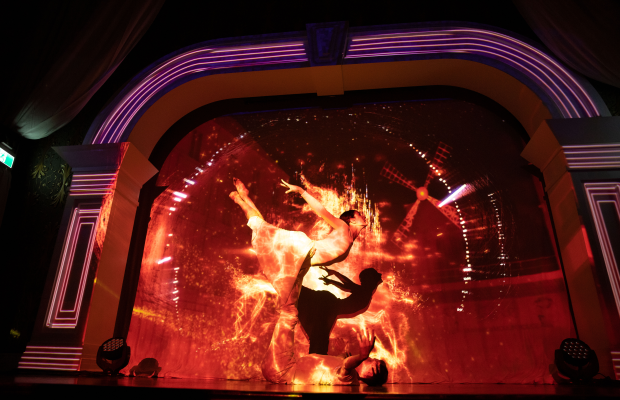 The event marked the official launch of the HSBC +Rewards MasterCard, a credit card that goes beyond what’s expected. It’s a credit card that offers one of the lowest interest rates in the market with a rewards program. Cardholders also get 2X rewards on eligible dining and entertainment. Plus, the card’s unique design glows under black light.

The theme of the event, An Evening of the Unexpected, was carefully orchestrated to keep guests, members of the press, and notable food and lifestyle influencers in the dark until they arrived and found themselves immersed in the experience.

Guests were welcomed into a lush Mediterranean courtyard, complete with actors, musicians and dancers. After a quick set changeover, the venue turned into an eccentric European supper club. Later on, curtains were pulled back to reveal a fluorescent Asian street market hidden underneath the balcony, kicking off a black-lit dance party that lasted until the end of the night.

“You wouldn’t expect hip-hop mimes, heavy metal accordion players or eight-foot-tall LED robots with smoke cannons for arms at a credit card launch, but the unexpected is at the heart of this new product,” says Ari Elkouby, executive creative director at Wunderman Thompson Canada.

HSBC’s new “Unexpect More” campaign encourages millennials to choose a credit card that gives them more than they expect instead of settling for the status quo. The campaign and event were created by Wunderman Thompson Canada with media support from Touché!.