A Startup Story: How DR.VEGAN Achieved a Healthy Market Share 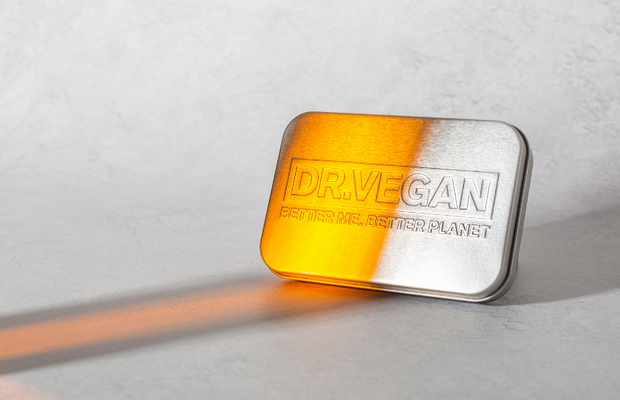 You could be forgiven for thinking that 2020 has been a less than ideal year for new businesses. Despite the unprecedented disruption, however, some brands have been able to find their footing and make their mark in an increasingly uncertain world.

One such brand is DR.VEGAN, a naturally sourced and plant-based supplement range which launched in the UK at around the same time the country went into its first lockdown. Looking to cut through its market category with a higher quality and ethical product, DR.VEGAN has already made an impression. In fact, the company was recently featured in Vogue’s Winter Wishlist - not bad for your first few months on the market.

Helping to ensure a successful launch for DR.VEGAN was the independent creative agency Five by Five. With its bespoke approach to getting new brands off the ground (a unique programme the company has named ‘Accelerate’), Five by Five was instrumental in those first weeks and months that served as the launchpad for a successful debut year - against a challenging economic backdrop - for DR.VEGAN.

To go behind the scenes of the fledgling brand’s launch, LBB spoke exclusively to DR.VEGAN co-founder and MD Gordon Lott, and Five by Five’s client service director George Roberts.

Accelerating To The Front

“What it comes down to”, explains George Roberts, “is ensuring that businesses can start driving income through audience communications in three to four weeks, as opposed to three to four months”.

The value of Five by Five’s ‘Accelerate’ approach is not lost on business leaders, least of all Gordon Lott. “Five by Five were so helpful right from the start”, the DR.VEGAN co-founder notes. “Right at the beginning of the process, we sat down with them for a brainstorming session. From that initial chat, we were able to develop a brand platform that I believe got us into exactly the right position for a successful launch”.

As well as the broader brand platform, Five by Five’s creative team also had a hand in developing DR.VEGAN’s ‘Better Me, Better Planet’ tagline. Interestingly, DR.VEGAN’s own research shows that 66% of the brand’s customers do not self-identify as vegan. “One of the insights that we were able to find with Five by Five’s help was that we really had a cross-category product on our hands”, says Gordon. “So we were attracting consumers from lots of different places - not just the supplements category, but the beauty category, wellness, personalised healthcare, tech, and of course dietary. That helped us to understand our customer base a lot better”.

“What we find is so helpful about Accelerate for smaller businesses”, says George, “is that it’s an approach which is built for the bottom of the traditional sales funnel rather than the top - and we’re not ashamed of that. It allows us to bring new products to the market at pace and with limited investment”.

DR.VEGAN’s launch has come around at a time when veganism has never been so popular. “I think what we’ve all been seeing over the past few years”, observes Gordon, “is this evolution of veganism from something of a fringe concern into an idea that’s completely mainstream and reaches far beyond just people who are vegan. Whether it be driven by health reasons or environmental concerns and the latest David Attenborough documentary, veganism has shown it’s far from a fad and as time goes on its popularity only seems to be growing”.

There is a question, however, as to whether veganism’s historic popularity has been a help or a hindrance to DR.VEGAN. Has the brand been attempting to stand out in a crowded field, or is it riding a wave?

“It feels to me very much like we’re just at the beginning of something much bigger”, says Gordon. “We’re only now starting to see the same questions that have been asked of the food industry being asked of the wellness and healthcare industries. I think, as time goes by and awareness of how the stuff you’re putting in your body gets made increases, there will be more people who say ‘you know what, there simply has to be a better, healthier and more sustainable way of doing this’. And that’s where DR.VEGAN comes in. Better for you, and better for the planet. That’s our offering”.

In just a few short months on the market, DR.VEGAN has successfully made an impression on its customers. The brand is already rated ‘Excellent’ with five stars on Trustpilot, attracting over 100 reviews in just three months. But how much of that goodwill is down to the product, and how much should be attributed to successful brand communications?

“It’s an interesting question”, notes Gordon. “It is the whole experience, from the first ad you see to our nutritionists’ advice, the packaging, and most importantly, the actual benefits you feel from taking our supplements - they all contribute to our extremely high repeat purchase rate. Our values, our ethics and the brand is behind everything we do and I’ve no doubt it makes an impression on our audience. Of course, due credit for that needs to be shared with Five by Five who did a stellar job helping us craft the communication platform in the early days”.

For his part, George is already looking forward to the next startup to work with Five by Five. “The Five by Five purpose is to work with ambitious brands to make them easier to buy - regardless of their size and sector”, he explains. “The speed of our Accelerate approach lends itself to rapidly changing markets, helping brands to stay relevant. In an uncertain landscape, that has to be a benefit”.

Gaming and Marketing: The State of Play

Uprising: It’s Hard to Shut Rebecca Worley Up, But Why Would You Want to?

Oceanview: Between the Waves of Five by Five’s Secret Weapon