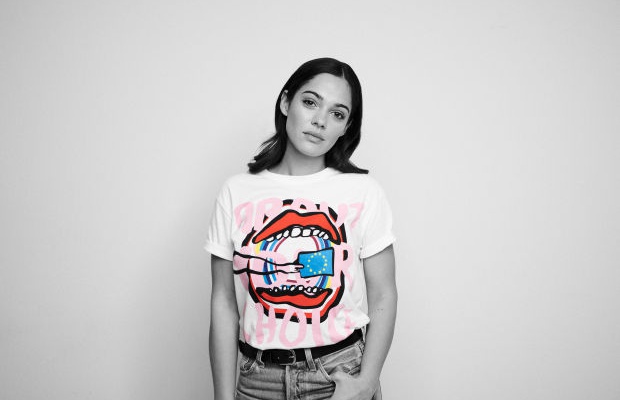 To coincide with the 2019 European elections, ABOUT YOU is speaking out about the importance and value of the right to vote. With ‘ABOUT YOU(R) CHOICE,’ the online fashion shop is continuing to take a stance and share values in its marketing. The company recently advocated greater liberty, self-determination, and a community founded on tolerance and diversity with its ‘Freedom’ campaign.
Now, ABOUT YOU is building on this for the European Parliament elections. Together with Hamburg advertising agency Kolle Rebbe, part of Accenture Interactive, it has developed a brand campaign promoting greater political participation.
“The fundamental freedoms of the EU are essential for us as an e-commerce company which operates throughout Europe — ABOUT YOU would definitely not be as big as it is now if the European Union didn’t exist. With that in mind, we see the European elections as an opportunity to take responsibility and make a statement for greater political engagement,” explained ABOUT YOU co-founder and co-CEO Tarek Müller.
‘ABOUT YOU(R) CHOICE’ is a distinctive combination of the strong brand ethos and principles held by the online-only retailer, which currently operates in seven European countries. It is due to commence operations in two additional European markets this year. According to the firm, the online fashion store is due to be launched in Slovakia in June, followed by a rollout in Romania this fall. With its clear message, ABOUT YOU succeeds in credibly transporting the European values of freedom, community, and diversity in its pro-vote campaign. These values are also reflected in the campaign symbol — ‘The Choice Shirt’ created exclusively for ABOUT YOU by the Danish fashion designer Henrik Vibskov. “The design of the T-shirt features various democratic symbols and is intended to show that each person’s voice should be heard,” explains Henrik. 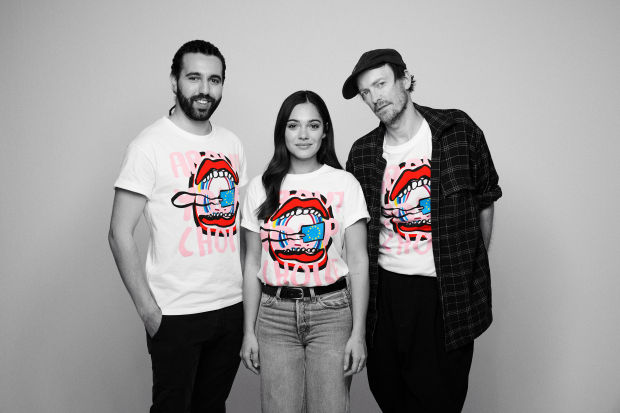 The launch of the colourful statement tee is being accompanied by a special promotion which also marks the beginning of the large-scale European election campaign. To highlight what it means to have no choice, customers who visit ABOUT YOU on May 14, 2019 — just a few days before the European elections — will only be able to purchase ‘The Choice Shirt’ instead of selecting from the usual extensive range of 200,000+ articles. This promotion aims to highlight the importance of the right to vote as a privilege and an expression of two freedoms — one which is worth protecting by voting in the European elections. Each customer who buys a T-shirt will also receive a voucher offering a discount equivalent to the turnout percentage, providing an additional incentive to go to the ballot box.
“Since day one, it has always been important to us to demonstrate a clear ethos. With this campaign, we are going one step further with the aim of using our reach to draw attention to this right and demonstrate political engagement — because decisions concerning Europe affect all of us,” said Tarek Müller, who can be seen in both campaign commercials as a well-known face and voice of ABOUT YOU. The personalities chosen to front the campaign are also testament to the authenticity and credibility of ‘ABOUT YOU(R) CHOICE.’
Along with ABOUT YOU cofounder and co-CEO Tarek Müller, actress Nilam Farooq and designer Henrik Vibskov talk about their attitude to Europe and the importance of the right to vote. Countless national and international influencers are also involved in the campaign, lending it further celebrity support. They include German model Lena Gercke, social media star Daniel Fuchs alias Magic Fox, model Elena Carrière, model Sofia Tsakiridou von Matiamu, Dutch actress Pip Pellens, Dutch TV Presenter Jan Versteegh, influencer and model Claartje Rose, Belgian menswear blogger Matthias Geerts, Czech actress Anna Kaderavkova, and Czech actor Adam Misik.
A cooperation with up-and-coming podcaster Gregor Schwung also forms part of the ‘ABOUT YOU(R) CHOICE’ campaign. A nine-part series of podcasts about the 2019 European elections will start on May 9 as part of his existing podcast format, Politik mit Schwung. Listeners can expect interviews with top candidates from the six major parties along with interesting background information about the European Parliament and the European Union. By supporting the young podcaster, this special collaboration allows ABOUT YOU to foster the provision of informative content and political education as part of its ‘ABOUT YOU(R) CHOICE’ campaign as well as highlighting the importance of the right to vote. 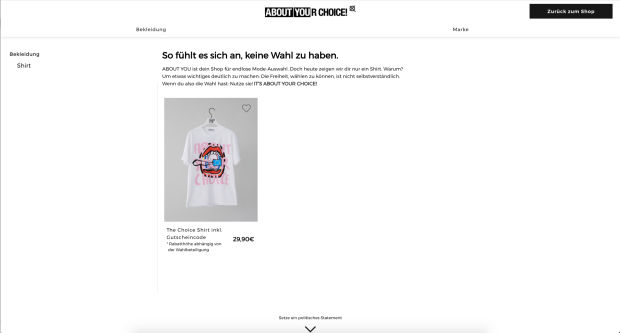 The ‘ABOUT YOU(R) CHOICE’ campaign launched officially on May 14, 2019. In addition to Germany, the digital campaign will be broadcast in Austria, the Netherlands, Belgium, and the Czech Republic. It consists of two 60-second commercials (Choices and Mission), which will be shown on YouTube, Instagram, and Facebook. Additional campaign material will run in the online store and the ABOUT YOU app.
‘The Choices Shirt’ is available in sizes XS through XL, costs €29.90, and will be available exclusively from ABOUT YOU starting on May 9. ABOUT YOU will donate all proceeds from sales of the campaign tee to the international non-governmental organisation Amnesty International, which is dedicated to safeguarding human rights.