More than 100 ad agencies, production companies and creative shops came together in a unified effort toward empowering underserved teens to take on life challenges and unlock their inner bravery 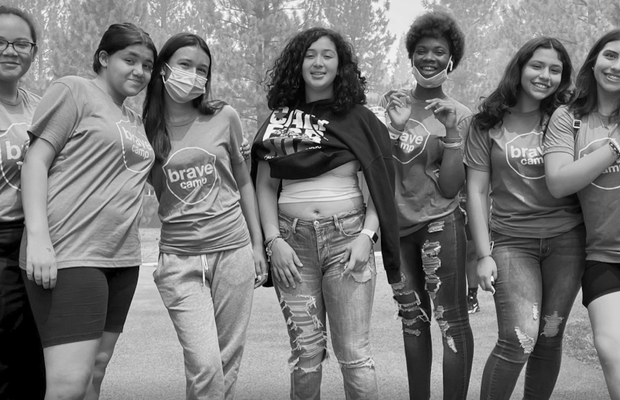 On July 25th, a group of underserved, BIPOC (Black, Indigenous, and People of Colour) teens took a bus from Sacramento to Portola, CA to attend a new kind of camp – one designed to unlock bravery, inspire individuality, and build self-confidence – an experience that would give them a ‘road map’ to stepping into their greatest potential.

This unique camp is aptly named Brave Camp and was created by global non-profit Today, I’m Brave to empower the next generation of leaders to take on life challenges and societal issues deeply relevant to them, as well as serve as a launch pad for future Brave Camps across the US and eventually the world. Even though the inaugural camp wrapped up earlier this month, the energy from it lives on, having made a powerful, lasting impact on all campers, guest speakers, leaders and attendees.

And it wouldn’t have been possible without the generous support of more than 100 ad agencies, productions houses and creative companies from around the US who banded together in like-minded spirit and goodwill to sponsor a teen, or more, at $1,500 each. This altruism helped bring the weeklong experience to life, and allowed all Brave Camp teens to attend at no cost to their families or loved ones.

As a thank you to all those who sponsored a teen at Brave Camp, Today, I’m Brave created the following video that illustrates the unique qualities of the camp and what makes it such an impactful experience. The video is set to the soundtrack of the original song titled ‘Today, I’m Brave,’ written and performed by singers, songwriters, and Brave Camp speakers Nadirah X and Christopher Taylor, followed by an impressive rolling list of all sponsors at the end of the video.

“It’s hard to put into the words just how impactful Brave Camp was for the campers and  all of us who were on the ground at Grizzly Creek Ranch facilitating, participating in the activities, sharing ono-on-one moments with campers -- it was truly amazing and inspiring,” said Lindsay Stein, CEO of Today, I’m Brave. “And when I look at all of the agency, company and even individual support of our Brave Camp youth, it fills my heart with so much light and gratitude -- as they were part of an experience that helped these teens unlock their brave inner voices. It’s a perfect example of when our hearts are aligned, we are a greater force for change.”

Brave Camp was held July 25th – 31st at Grizzly Creek Ranch in Portola, California and unlike other summer camp programs encompassed a weeklong immersive, customised camp curriculum to help BIPOC teens take on everyday challenges, like bullying, peer pressure, self-expression, and other social issues. The curriculum is based on Today, I’m Brave’s Brave Values Programming and the expertise of our non-profit partner, Sierra Nevada Journeys, who specialise in social emotional learning, wilderness therapy, and environmental, adventure-based education. The campers all reside in Sacramento and were identified and selected by Brave Camp partners Improve Your Tomorrow and Project Optimism from Sacramento. Brave Camp took the campers on a Brave Transformation Journey, which included six stages: Community, Empathy, Adaptability, Uniqueness of Self, Confidence, and Superpower ‘Brave Mountain,’ where the children’s own personal superpowers were illustrated on their individual rocks and placed on the mountain for years to come.

Motivational leaders and speakers at Brave Camp included the legendary Gracie Brothers, Rener and Ryron, who brought Brazilian Jiu-Jitsu to America and created the UFC, who taught their Bullyproof program to help give campers the tools to empower themselves, build confidence and unlock their bravery; renowned yogi and health fitness expert Michael Carter who inspired campers with daily meditation and one-on-one conversations about individuality, empathy and self-esteem; celebrity trainer Paul Bamba, who grew up in foster care shared his life journey and importance of adaptability; Sheila Darcey who brought her one-of-a-kind art therapy practice to inspire the campers to express themselves through art; Jason Harris, CEO of Mekanism who taught the campers how to identify their individual superpowers and inspired them to share it on stage in front of the entire camp; and Jamaican rap/hip hop poet Nadirah X, singer, songwriter Christopher Taylor and Sierra Nevada Journeys instructor/drummer Theo ‘TSAVO,’ who energised the camp with music and poetry workshops and motivated the campers to jump on the mic and sing, many for the first time.

All Brave Camp teen sponsors will be part of the Brave Camp Documentary that was filmed throughout the week. The documentary will help create even greater awareness for the ways in which Brave Camp is helping elevate underserved youth, with the goal of bringing the campers back the following year, along with 100 more children.

To measure success and impact, Today, I’m Brave and Sierra Nevada Journeys will conduct qualitative surveys with the teens, while also staying connected to them after camp to see how they are integrating their Brave learnings into their everyday lives. Ultimately, the goal is to demonstrate that time spent in nature and the outdoors combined with the six stages of Brave Transformation can help children unlock their Brave inner voices and empower them to take on any challenges that come their way. With the data in place, Today, I’m Brave and Sierra Nevada Journeys aim to launch Brave Camps for underserved children all across the US, and eventually, around the world.