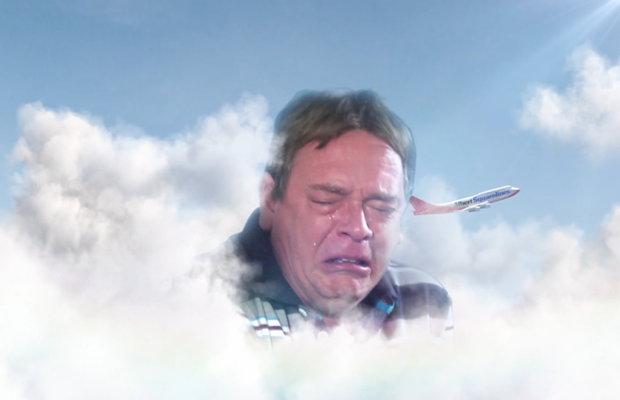 Brits love their TV. And due to its age, international prestige and unique funding model, the BBC is beloved by many, even beyond our rainy little plague island.
Thanks to said plague, TV has taken on an even more important role in British life in the past year. So to remind people of what’s on offer on its streaming platform iPlayer, the BBC launched a campaign late in 2020.
Positioning the service as an entertainment destination ‘Like Nowhere Else’, the campaign celebrates BBC iPlayer’s variety of content and the growing role this gives it in British popular culture; from live moments and events that reflect the mood of the nation, like Stormzy’s iconic Glastonbury set, to shows you can watch whenever it suits, like EastEnders and Fleabag.
Tapping up Prettybird director Yousef, it does so with a totally bonkers tone, remixing iconic BBC moments in original, irreverent ways, to create something truly unique.
Now the whole campaign is out, including the crowning achievement of the 60-second film, LBB’s Alex Reeves asked Yousef to explain how this weird wonder came to be.

LBB> Where did this project begin for you? What were your first thoughts when you heard about it?

Yousef> It's always so exciting when Mia [Powell, head of new business]'s name pops up on my caller ID. Even before I've picked up the phone I know there's an incredible opportunity on the other line.
The team at BBC Creative saw my music video for Piero Pirupa 'Braindead' and a few other projects and wanted to chat to me about doing a project they were working on.
30 mins after Mia's initial call we were on a Zoom with the BBC Creative team! I only had a few mins to check out their brief but I knew exactly the sort of thing they were looking for and I was blown over by their creativity and enthusiasm. I think we hit it off straight away developing ideas and figuring out how far we could push the idea.
My first thoughts were "this is amazing - we're allowed to make something like this?"
BBC wanted to celebrate BBC iPlayer's offering and showcase the variety of shows and ways you can watch them via on-demand or live stream. They wanted to create a series of standalone shorts and some surreal mash-up sequences that would work as a 60-second advert.

LBB> How did you first think you’d approach it and then how did that shift as the film came together?

Yousef> The approach was to initially work with archive footage from the BBC's extensive back catalogue but we quickly realised that we'd also need to shoot some specific plates on location and in studios (e.g. at the Swindon County Ground) if we wanted to keep certain jokes, moments and cameos in.
I was keen to make the BBC iPlayer universe feel alive so relying solely on archive footage wasn't gonna cut it! We shot the football stadium plates at the Swindon County Ground (referencing This Country) for the Gary Lineker, Kerry and Kurtan Mucklowe and Gregg Wallace cameos.
Some of the shorts like 'Javelin Alan' were completely archive footage based and other shorts like 'Profiterole Restart' were shot on a miniature set in a studio.
LBB> Everything the people love the BBC for today is compressed into one minute in the final video in the campaign. This is a big question, but I think a lot of our readers outside of the UK would help from a guide to all the different shows and references in it. Can you walk us through them?
Yousef> Let's do it!
We open with tennis legend Venus Williams getting ready to serve before being interrupted by soap stalwart Ian Beale crying from his infinitely memeable scene above the Wimbledon court. We wanted to add a plane in there and Fred, one of the creatives at BBC, thought of "Albert Squarelines" as an Easter egg branding referencing EastEnders which I thought was absolutely genius!
Next we transition to a gymnast hanging off RuPaul's earrings on a panel with Connell from Normal People, Lord Sugar from The Apprentice UK and Match of the Day presenter Alex Scott. They're all watching Chabuddy G (as Girth, Wind and Fire) from People Just Do Nothing.
They're squished together and fly into the sky using Chabuddy's ponytail like a helicopter. We see Match of the Day host Gary Lineker as a hot air balloon with Villanelle from Killing Eve in the basket who has just pushed out Kurtan from This Country.
Pan down and we see tonnes of Kerrys from This Country cheering before being interrupted by Kerry's mum Sue. Masterchef host Gregg Wallace appears when dinner is mentioned and he then scoops up the Kerry's onto his tasting spoon and devours them.
Inside Gregg's mouth we see Fleabag and Claire using Gregg's molars as hot tubs and fly down his throat.
We then exit Gregg into grime star Stormzy's iconic Glastonbury performance from 2019 who is with a few special guests. Alan Partridge on stage performing the air bass, Louis Theroux on someone's shoulders in the crowd and Sir David Attenborough wearing Stormzy's outfit from the "Shut Up" video with a sloth on his back.
We then zoom out of Top Gear star The Stig's helmet to see he's got a few passengers from People Just Do Nothing (Grindah, Beats, Miche and Steves). They're all flying through space.
Then there's a quick reference to the Doctor Who Tardis to wrap things up!
LBB> Phenomenal… Why were those moments or gags important for you to include?
Yousef> They celebrated the varied back catalogue that BBC iPlayer has to offer from old school references like Alan Partridge to current shows like RuPaul's Drag Race UK.
Myself and the creative team wanted the gags to feel relevant and ‘realistic’ to each character / cameo so Gregg Wallace should be doing what Gregg does and sample some food, but the food is actually Kerry from This Country. Kerry fills the Swindon Country Ground because her outfit on the show is almost always Swindon Town FC top and she's a huge fan. The Stig driving in space because he looks like an astronaut and the Kurupt FM crew with him are there because of a Top Gear and People Just Do Nothing crossover sketch from a few years back.
LBB> Do you have any favourites?
Yousef> My favourites were Ian Beale in the sky, Chabuddy G in drag at RuPaul's Drag Race, the whole Gregg Wallace sequence and Stormzy's set coupled with a grime remix of viral hit 'Buttery Biscuit Bass'.

LBB> Were there any references that you didn’t manage to fit in but would have loved to?

Yousef> I had a very strange idea early on during the treatment phase. It opened with Serena Williams pulling out a ‘tennis ball’ from her pocket to reveal its a sphere of [EastEnders character] Phil Mitchell's head. Serena serves the Phil Mitchell ball as he winces. It deflects off the other player's racket and heads into the sky where it hatches in mid air and Sir David Attenborough riding an eagle is riding on the back of it with his arms out. Didn't get the sign off on that one!
A few ideas that we actually made but didn't end up making the final 60-second edit included Charlie from BBC Breakfast falling through a trapdoor in his seat and being replaced by Villanelle (this ended up being a short only), Ben from Tracy Beaker DJing Stormzy's iconic Glastonbury set and all five Doctors (including Christopher Eccleston) from the Doctor Who revival raving in the crowd in Glastonbury. These were cut for time.
I'm sad the Tracy Beaker reference got cut - I think TB fans would have loved that.

LBB> What was the actual process of making a coherent film (and set of shorter ones too) out of so many ideas colliding?

Yousef> From the brief it was clear that we were making a bunch of shorts and a selection of those shorts would be stitched together into a 60-second advert. The original brief for the 60 was really fantastic but I was keen to make it flow from scene to scene which required us shooting original material to create interesting transitions and make the universe feel alive and less flat.
For example, the original idea was to use archive footage of Gregg Wallace on Masterchef but we didn't find anything that would fit the mood and perspectives to make it feel realistic. We also really wanted to transition into his mouth to see all that was happening in there as a way to transition into Stormzy but we wouldn't have been able to do that solely with archive footage.

LBB> What will you remember most about this project?

Yousef> Everything really! From the incredible creative team that developed the concept with me and put their trust in me to working with some amazing actors and personalities which I really admire and collaborating with some of my favourite visual effects and CG artists around the world to help put it all together.