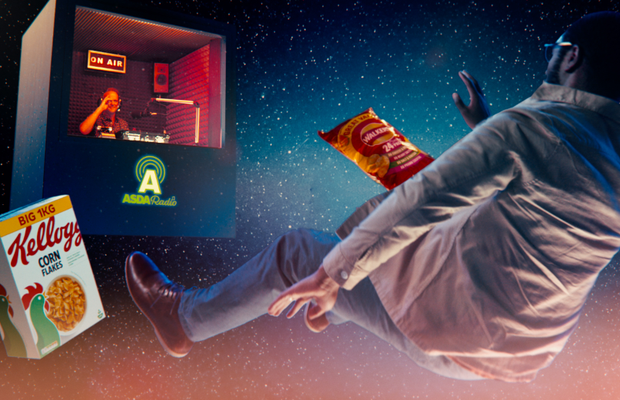 Asda has unveiled its first major advertising campaign since appointing Havas London as its creative agency earlier this year. ‘Jump into Autumn’, which launches on TV today, introduces the new brand platform Get the Asda Price Feeling – with that feeling brought to life through a joyful, hyperbolic representation of its in-store experience.

It represents a marked shift in tone for the retailer, reflecting a desire to re-energise its emotional connection with customers by championing the purpose, point of view and inherent personality at the heart of the brand. It breathes new life into the longstanding property of ‘Asda Price’ – with Get the Asda Price Feeling highlighting the positive difference Asda makes to every customer, colleague and community, every single day.

The upbeat 40 second spot starts innocuously enough, as a family is met by an older Asda colleague as they enter a store. She signals to turn up Asda Radio – blasting out Boston’s More Than a Feeling – before things start to get surreal as she somersaults down an aisle of produce and launches herself into the air. A voiceover questions why step into autumn when you can jump in, and the family proceed to do just that – with fantastical, theatrical scenes of colleagues acrobatically stocking shelves, mum and dad hurtling through space and the kids landing joyously in piles of plush toys.

A Pocket Tap brings things back down to earth – literally – as the voiceover highlights trolleyfuls of low prices and rollbacks across the store as just some of the thousands of reasons to feel awesome at Asda this autumn. It was created by Havas’ Dan Cole and Andy Garnett and shot by directing duo Conkerco through Academy Films. As well as TV, executions will span radio, press, social, digital, CRM, Asda.com and in-store.

The TV ad will air on Wednesday 1st September across ITV, Channel 4 and Channel 5; The Last Leg of Tokyo 2020 on Channel 4 at 22:50, A&E After Dark on Channel 5 at 22:13. The ad will also play out on ITV on Thursday 2 September during the Hungary v England Football World Cup Qualifier at 19:35.

Preyash Thakrar, Asda’s chief customer officer, said: “When our customers talk about Asda Price, it goes without saying that that they are talking about great value, but we know that they are also talking about great service, great quality products and great colleagues. Get the Asda Price Feeling encapsulates all of that, and describes how we can help to make a difference to our customers, communities and colleagues every day.

“September is traditionally a time of year when our customers are settling back in to a routine after the summer - they enjoy more nights in as the winter months draw closer, and start thinking ahead to the festive season. ‘Get the Asda Price Feeling’ puts the fun back in to routine, showing that great products and great prices come hand-in-hand at Asda.”

Vicki Maguire, chief creative officer at Havas London adds: “There’s a reason why Asda has been rooted in communities up and down the country for more than half a century. It only takes five minutes in-store to realise why – whether it’s through its colleagues, community teams or the omnipresent Asda Radio, this is a brand with personality by the trolleyful. We wanted to unlock that by treating the store as a stage, vividly bringing the ‘Asda Price Feeling’ to life to help an iconic brand get its mojo back. This is shamelessly fun, feel-good advertising, and we’re so excited to see where this creative platform takes us.”

Soundtrack: More Than a Feeling by Boston