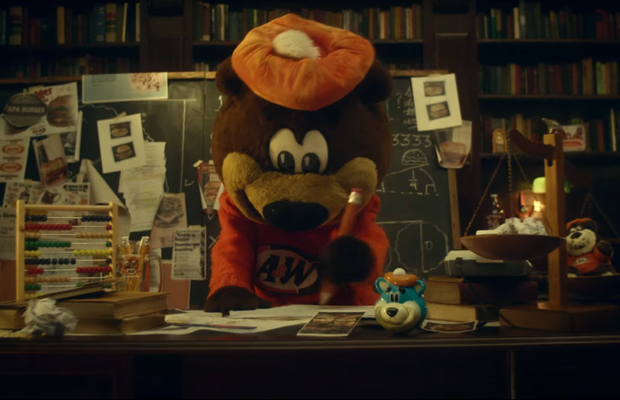 Get out your calculators: A&W Restaurants is releasing the 3/9 Pound Burger, a cleverly rebranded version of its 1/3 pound burger. Why? Because, math.

In the 1980s, A&W tried to compete with the immensely popular McDonald’s Quarter Pounder by offering a bigger, juicier 1/3 pound burger at the same price. Unfortunately, Americans aren’t so great at math. Confused consumers wrongly assumed that 1/4 was bigger than 1/3 (You know, because 4 is bigger than 3) and the whole experiment went down in history as a huge marketing fail.

Leaders of the beloved QSR chain - founded in 1919 and the oldest in America - have spent every waking moment since this embarrassing fiasco crunching the numbers, employing a team of top mathematicians and the creative services of ad agency Cornett in an attempt to bounce back with a burger so big and a message so clear that no one in their right mind would think it’s smaller than a puny Quarter Pounder. And they’ve done it!

A&W is launching the 3/9 Pound Burger with a dramatic reenactment of the 'Eureka!' moment that led to this possibly Nobel Prize-winning revelation about burger math. Cornett’s video features A&W mascot/math prodigy Rooty the Great Root Bear solving the unsolvable equation. In addition (math pun), a number of creative assets like window clings, table tents, branded memes and GIFs were created for the promotion.

“This story has been circulating for years, and every few months it seems to gain momentum and reappear on social media. We’ve received tons of questions about it, but prior to now we haven’t been proactive about setting the record straight,” said Liz Bazner, director of marketing at A&W. “We’re excited to have found a way to finally let America know that our burgers really are bigger and really are better.”

Fans of big burgers and big digits are encouraged to grab an A&W 3/9 Pound Burger from any of A&W’s 525 US locations.

This incredible feat of ingenuity and inspiring comeback story is all part of the A&W commitment to quality and a steadfast refusal to appeal to the lowest common denominator. The brand’s success thus far in 2021 comes after an equally successful 2020, when A&W managed to post a 10% comp sales increase for the second year in a row.

Bossing It: Stepping In and Speaking Up with Christy Hiler