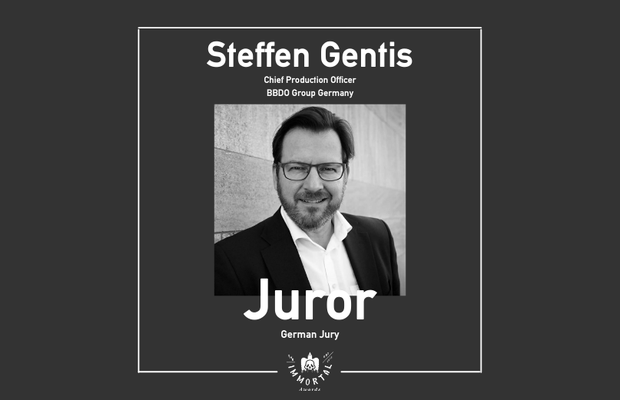 BBDO Group Germany's Steffen Gentis has been announced a juror at this year's Immortal Awards, joining the German jury.
Steffen joined BBDO as Head of TV in 2004 and is Chief Production Officer at the BBDO Group Germany and managing director of BBDO's integrated production Unit: CraftWork, ad agency services GmbH, since May 2013.
At BBDO, Steffen has helped lift the agency into the top creative Rankings year after year (Currently Number 1 in 2021) and helped craft the creative output with innovative and award winning work on brands like: Ford, smart, Deutsche Bahn, Dr Oetker, Becks, Schwarzkopf, O2, Mercedes, Allianz, Pepsi, Braun, Aspirin, Snickers, and the WWF. His credits to date include over 35 Cannes Lions including the Grand Prix for Good and the German Design Prize. In addition he has helped win 6 Grand Prix, 100+ Gold, 100+ Silver, 100+ Bronze awards for the One Show, New York Festival, London International Awards, Eurobest, Clio, ADC, Red Dot Design Award.
Steffen is also proud in significantly reducing its carbon output of the agency and raising efficiency dramatically in production with his award winning CUT!CO2 carbon calculator.
Steffen was born in South Africa, grew up on the beach in Malibu California and in the African bush. He studied photography in South Africa, where he started my career as a fashion photographer, which brought him to Europe to work for Vogue and other fashion magazines in the mid 80s. His first film work was in Italy for Martini and in Germany to shoot the first ever music video for the rock band Rammstein, this led him to open the first commercial film production in Berlin in the early 90s.
He directed or produced over 300 TV commercials, music videos and Television Shows.
He is the initiator of the GWA Forum Film Production and the first agency Head of Production in the German Art Directors Club, and in the Cannes Lions Jury. HE also initiated and host the Regielounge – Germany’s foremost advertising film event, and is the founder and chairman of the Royal Lesotho Horse Riding Society in Berlin.
Entries to The Immortal Awards are now open and Little Black Book members can make their submissions here today.
Entries into The Immortal Awards will be accepted until September 10th 2021. All entries must be made for a commissioning client, and must have first aired, broadcast, displayed, launched or published between 1st September 2020 and 31st August 2021.
Every member of LBB is entitled to up to five entries, depending on their membership tier. This year, Bronze members receive one entry, Silver members will receive two entries and Gold members will receive five entries. The full list of rules, including eligibility dates, can be found here.
If you’d like to enter the Immortal Awards but you’re not yet a member of LBB, sign up here today. If you’re already a member and would like to increase your number of entries, you can upgrade your membership here.