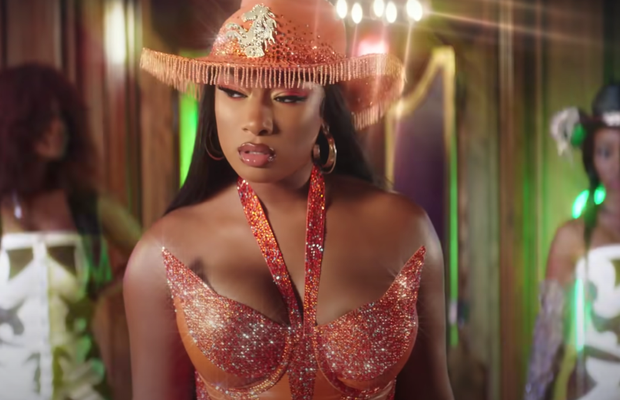 Rising hip-hop artist Megan Thee Stallion has recently teamed up with fast-food chain Popeyes to create a unique product with her endorsement. After a tasting and selection process, the Houston-native rapper decided on a hot sauce which has now become what is known as the ‘Hottie Sauce’ on Popeyes’ - ‘Hotties’ being a moniker for fans of Megan Thee Stallion.

To promote the new condiment, Popeyes partnered with creative agency GUT to create a spot that involves the ‘Hottie Sauce’ being stolen by Megan Thee Stallion’s alter ego, Tina Snow. Themed as a wild west bandit chase through the plains from her hometown Houston to Popeyes’ spiritual home of New Orleans, Megan and her trust companion (her dog 4oe) embark on an epic showdown - riding a motorbike in live-action footage one minute, then riding a stallion of her own in vibrant 2D animation the next.

GUT spoke with LBB’s Ben Conway about how the collaboration between Popeyes and popstar came about, being influenced by Megan Thee Stallion’s passion for anime and how they had to rebuild the set after suffering flooding.

LBB> Where did the original idea come from for this campaign? Was GUT involved after the ‘Hottie Sauce’ collaboration had been organised?

GUT> With Popeyes’ southern roots, to their shared love for flavour and spice, the brand has a lot in common with Megan Thee Stallion. She has always been a fan of the brand and first engaged with Popeyes during the Chicken Sandwich craze in 2019. The client felt like this was such a natural partnership and began conversations with Roc Nation at the end of 2020.

She worked closely with the Popeyes culinary team to develop the exclusive Megan Thee Stallion Hottie Sauce from the beginning. Together, they aimed to create a sauce that matched Megan Thee Stallion’s vibe of spicy, bold, a big flavour punch, and something that they felt could go equally well as a dip and as a complement to our Chicken Sandwich. The Popeyes culinary team presented her with a few options, which were narrowed down to two, and the candidate that didn’t make the final cut was a spicy ranch. The brand liked both but ultimately she chose the recipe that is now known as the ‘Megan Thee Stallion Hottie Sauce’. GUT collaborated with the brand on the name with the insight around her fans being called ‘Hotties’.

LBB> Did Popeyes have a brief already? Or did you approach them?

GUT> This was one of those projects where we kind of had a brief. More than anything, the client expressed conviction in Megan Thee Stallion and asked us to ideate - so we went all in. Alongside the client, we proactively pitched ideas to her and her team, and fortunately, they loved the work.

LBB> How much of the inspiration came from Megan Thee Stallion’s persona and music? What elements of the spot were derived from this?

GUT> We were inspired by the opportunity to create a world that combined the best of Popeyes and the culture around Megan Thee Stallion, which included featuring her own French Bulldog, 4oe, who makes a cameo and helps her chase down her stolen Megan Thee Stallion Hottie Sauce. This campaign is heavily inspired by her music and persona, but also with elements like the fact that her fans are called the Hotties, her deep Houston roots, and including her cute Frenchie 4oe in the spot in ways that felt authentic. It’s that authenticity angle that ties us back to Popeyes, a place that’s known for its NOLA roots and food. 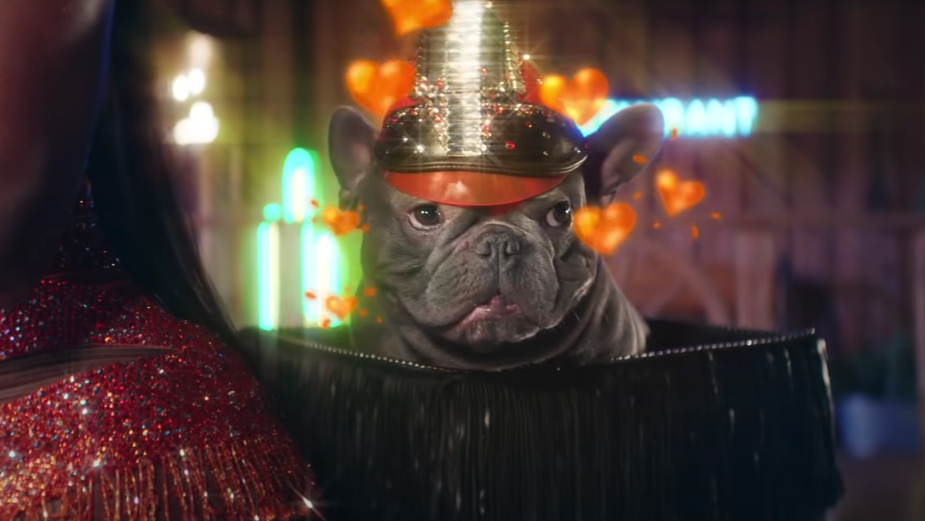 LBB> Why did you decide to use a ‘Western’ theme? And were you inspired by any Western movies or shows in particular?

GUT> We love how, being from Houston, she has a little western flair so we wanted to create a world around it. That inspired us to write the story of The Bandit stealing the Megan Thee Stallion Hottie Sauce and her chasing The Bandit to Popeyes’ hometown of New Orleans to secure her sauce. Once we had that, we wrote the storyline around it. Like any western, you need to have a villain. And who better to play The Bandit than Megan Thee Stallion’s alter ego, Tina Snow?

LBB> When was the idea of combining 2D animation and live action concepted? Could you walk us through the creative process?

GUT> We tapped into her love for anime, which inspired us to bring animated elements to this film and allowed us to make the storytelling even more immersive. We wanted to use illustration to really bring us into her version of a wild west world. We also incorporated animation into the live-action scenes to amplify the action and bring the whole world together.

LBB> How did you try to communicate the ‘Hottie Sauce’ product, without directly showing or talking about the sauce’s attributes?

GUT> We love that the Megan Thee Stallion Hottie Sauce is basically an extension of her character, and we show that in the film. It’s spicy in the beginning, from the moment that she gets up from the bar and says, “Not My Hottie Sauce!”, but then she’s super sweet, like when she transforms into the anime version of herself with her cute companion 4oe. Even in real life, Megan Thee Stallion is a wonderful, multi-layered person, so of course, her sauce is a reflection of that.

LBB> If I had to use one word for this spot it would be ‘colour’ - the sets, costumes and animations are all so colourful - could you take us through the process of creating and designing this element of the spot - from the neon signs to the flaming stallion!

GUT> Funnily enough, Megan Thee Stallion actually loves the colour orange, and it also happens to be Popeyes’ main brand colour. So naturally, it’s the centre of everything. From there, we thought, “What would Megan Thee Stallion LOVE?”, “What kind of bar would she sit at?” and “How would she chase someone across the desert?” Then we took those executional thoughts like the neon signs, bikes and flaming stallions, and painted them with Popeyes accents. And we don’t just mean colour - we also infused them with our personality. 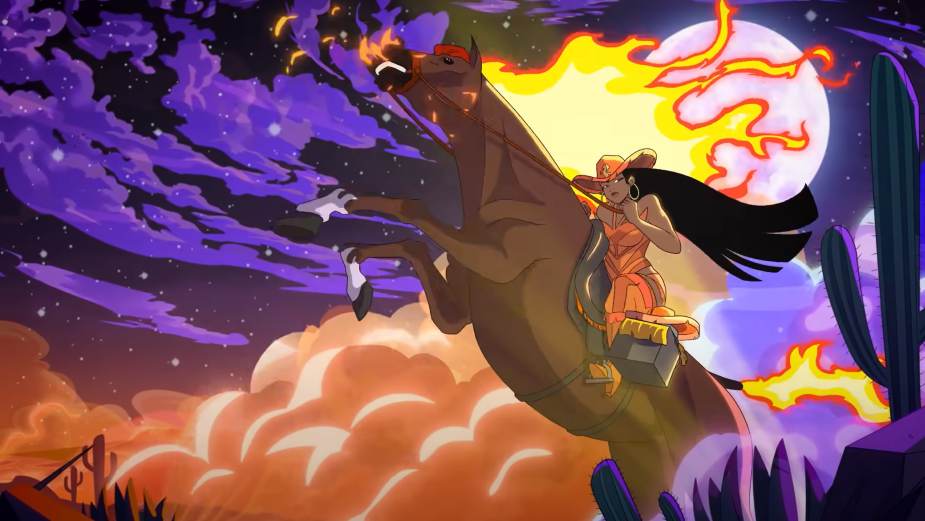 LBB> What are your relationships with Fela and their director Kajal like? Did you know that you wanted to work with them on this project from the start?

GUT> This was actually our first project with Fela and Kajal. There was a lengthy process for choosing the right director, but it was perfect chemistry from the very first meeting. Kajal’s treatment gave us goosebumps. It felt right.

LBB> What does Kajal’s and Megan Thee Stallion's existing creative partnership bring to the spot?

GUT> Definitely trust. She and Kajal have previously collaborated on a piece for The New York Times called, “Why I speak up for Black Women,” which we loved. This kind of work does not appear out of thin air. It was intimate. It’s the kind of connection between talent and director that leads to great work. It’s rare, and we were lucky enough to witness it come through on set.

A great director absorbs the concept, and brings back newer ideas. Kajal went above and beyond that. She took us to a world that we had only partially imagined, and her treatment was visual magic. Once again, it was at that moment we knew she was the right partner for us - it showed how involved she would be throughout the entire process. A real production partner. Kajal, we love you!

LBB> Were you involved in the production process? Were you on set at all? If so, how was this process and does anything memorable stick out to you from production

GUT> Yes, GUT was involved from the very beginning. While so much of the spot relies on animation and visual effects, we actually shot it on a ranch with horses here in Miami. We were inspired by the opportunity to create a world that combined the best of Popeyes and the culture around Megan Thee Stallion, working with the brand alongside our production partners and set designers. 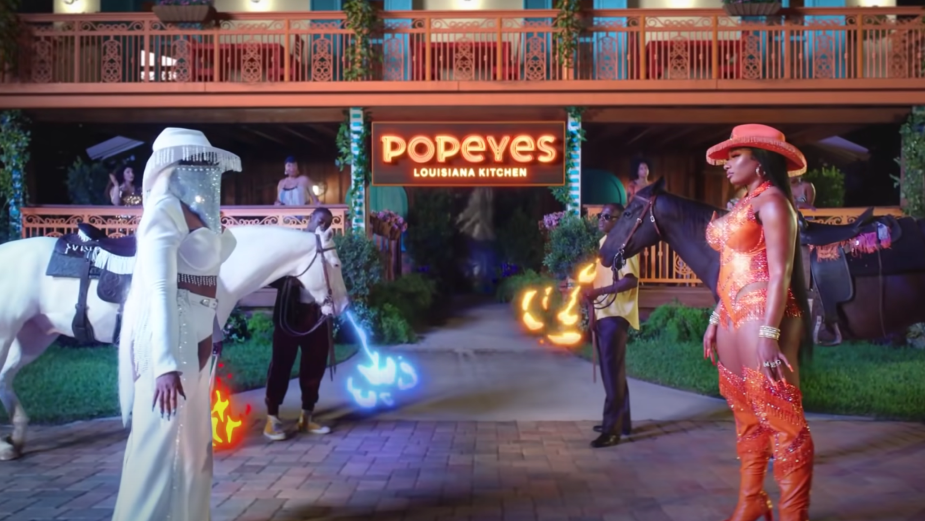 LBB> Who did the costume and set design? How was that process? The colours match the vibrancy of the animation and you’ve made the wild west very glamorous!

GUT> Both GUT and Fela put together some mood boards that were the stem of the costume thinking, but it was ultimately Zerina Akers, founder of Black Owned Everything, who put together the final design. Megan Thee Stallion herself was very involved as well, which added to the glamour!

LBB> How important was the comedic aspect of the spot, and how did you create that in the film?

GUT> Again, it all comes back to the balance of spicy and sweet of her real personality. Some moments are badass, and some moments come with comedic relief with the appearance of 4oe -- all things that relate in some way to the tone of Popeyes and the Megan Thee Stallion Hottie Sauce itself.

LBB> What was the most difficult component of this campaign and how did you overcome it?

GUT> Candidly, time. Needless to say, this project had so many components to it. This was also a food shoot and a social campaign, so at one point we had three shoots going on set at the same time. But everyone on set really wanted to be there and produce the best work possible, so we made it happen. Oh, and the Popeyes set was destroyed in a freak lunchtime Florida rainstorm, so props to the art department for pulling it back together again.

LBB> Do you have anything to add?

GUT> Thank you to everyone who believed in this project. From production, to editing, animators, our client, the agency, and Megan Thee Stallion herself. This was truly a labour of love from everyone, and we’re happy to have been a part of it.