Frontline19 founder Claire Goodwin-Fee alongside creative directors Darren Beresford and Richard Gayton, on creating a campaign about a crisis creating a crisis 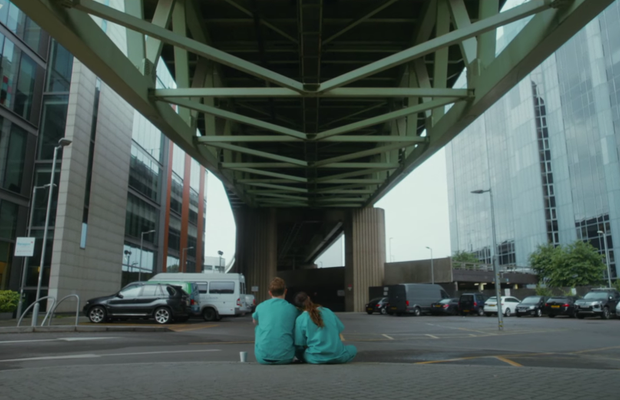 In collaboration with adam&eveDDB and Academy’s Novemba, the new campaign for the charity Frontline19, which offers support for NHS and frontline workers struggling with their mental health, creates a moving depiction of the reality of working in the NHS and why it’s so important to show our support to the nation’s real-life superheroes.
A shocking statistic reveals two in five NHS healthcare workers are suffering from PTSD as a result of the pandemic. The campaign highlights the end of an NHS staff shift as the starting point for processing the events that occurred. Worried looks, vacant glances and a sombre tone are uplifted by small acts of kindness in the form of supportive messages.
Frontline19 founder Claire Goodwin-Fee and adam&eveDDB creative directors Darren Beresford and Richard Gayton speak to LBB’s Nisna Mahtani about their vision for the campaign and its ultimate creation.

LBB> What was the initial starting point for Frontline19 and how did that progress into the brief for this campaign?

Claire> My father was in a coma in ITU at Kings College Hospital back in 2018 and I wanted to offer my support to staff that had supported my family. As a psychotherapist of nearly 20 years, I knew the pandemic would create significant mental health issues for the staff and that support services may not be adequate for them.
I hoped to help 40 or perhaps 50 people if we could. To date we have given over 65,000 counselling and support sessions via our incredible volunteers. I am incredibly proud of that and of the people who give their time to support others.

LBB> This film is incredibly emotive and powerful with the message it sends. What made you want to be involved in its creation?

Darren & Rick> It began with the idea for the phone line, Hopeline19 where the public can leave messages of love and support for the NHS, which came about after reading the horrific stat that two in five NHS workers are suffering with PTSD as a result of the pandemic.
We then made the film to show the nation that whilst the pandemic feels like it’s starting to wind down for the rest of us, NHS workers are only starting to deal with the mental health crisis that it has caused. We don’t know that people realise the lasting mental damage this pandemic has caused frontline workers and it’s the nation's turn to be there for them.

LBB> Most of us can’t begin to imagine what it’s been like for the country’s NHS workers. How did you come up with the concept for this video?

Darren & Rick> So much of it came from listening to our client at Fronline19, Claire. She spends her days dealing with the mental health fallout of the pandemic and had so much insight into what NHS workers are dealing with. PTSD follows them around in their daily lives, waiting to be triggered by the smallest things.

LBB> What did the casting process involve?

Darren & Rick> Working with Academy and the directors, Novemba we all agreed that the cast should be made up where possible of real NHS workers who have lived through this. It was shocking actually, seeing how raw and close to the surface their emotions were. So much of the trauma you see isn’t really acting.
Claire> We wanted people that reflected the diversity within the NHS and frontline workforce and actively sought people who could reflect that and have experience as frontline workers themselves. adam&eveDDB along with Academy did an amazing job at finding not only amazing actors but people that represent who we support.

LBB> The choice of music works well to tell the story in a way that captivates the audience. What was the process of song selection?

Darren & Rick> It was one of those occasions where you see the track on the film and know that it absolutely has to be that one. The tone, the haunting quality, the vulnerability of the voice all felt perfect. Luckily the team did amazingly to get permissions to use it. Nothing else would have felt right after hearing that one on it.

LBB> The cinematography has a very real, raw feeling. How did you achieve this in the way in which you filmed and edited?

Darren & Rick> Novemba at Academy and Steve at tenthree are both ridiculously talented. So that really helps. We wanted to get up close and put the viewer in the shoes of the NHS workers. So we’re very close, quite claustrophobic at times, which helped transfer the emotions from the cast to the viewer.

LBB> What were the biggest challenges when it came to creating the film?

Darren & Rick> Working with a small charity meant that the money was particularly challenging, but Medb and Gemma at Academy worked their magic to get us the locations we needed. We ended up shooting some scenes in Gemma’s house… we believe it’s for sale if you like the look of it.

LBB> What will be your enduring memories of creating this campaign?

Darren & Rick> We’ve heard some genuinely horrific stories from critical care workers over the last year. They’re not the sort of thing that you forget. But we’ve also found out how many good people there are in our industry, who’ve worked their arses off helping us put this campaign together, because they wanted to do what they could for the NHS. We owe a lot of people a lot of pints (especially our business director, Louis).
Claire> The passion and dedication by all of the teams involved. By the huge sensitivity shown by all of the team at Adam & Eve DDB and Academy to get this right. They took time and effort to understand our work and are just as passionate as Frontline19 in supporting others.

LBB> What do you hope to achieve with the response to this campaign?

Darren & Rick> We hope that the nation gets behind it and leaves messages for the NHS on Hopeline19 (0808 19 665 19 if you’d like to tell them how wonderful they are). We hope we’ve created a lasting service that’s there for frontline workers to call and listen to how much the nation loves them, whenever they might need to hear it. We’d be very proud of that.
Claire> We hope to highlight the inadequate support for the NHS et al in processing this trauma and also break the taboo that is often a key factor in stopping people from seeing support. We also hope to reach more people to offer support, both now and in the future with counselling and training, funding to achieve a long term platform to creative, positive and sustainable change for many.