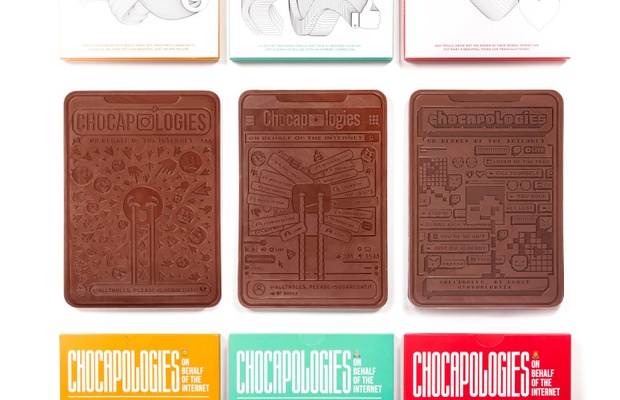 MullenLowe MENA has collaborated with renowned Chef Karim Bourgi to do the impossible – sugar coat the internet. The internet has been priding itself on not sugar coating opinions since…well, since it became a thing. People quickly felt the power of anonymity, a blank profile picture, a random combination of numbers instead of their own name, and finally plucked up the courage to be honest with each other.
Too bad that this honesty quickly spilled over into the terrain of obscenity – very rarely will you find somebody who hasn’t been bullied on the internet or (on the flip side) someone who hasn’t written a mean snappy comment under a video or picture. Especially since the rapid rise of social media, starting from MySpace and currently riding the wave of TikTok, people have become accustomed to not believing that their cruelty has a receiving end in the face of someone they have never truly met. Deeming the internet ‘the cruellest playground in the world,’ MullenLowe MENA took it upon themselves to fix the dark side of social media.
Dubai based pastry chef and chocolatier Karim Bourgi, firmly believing that there is nothing that a giant piece of chocolate cannot solve, aimed to raise awareness of the effects of body shaming, hate messaging and cyberbullying through his uniquely crafted and designed chocolates. This is how Chocapologies came into fruition – gorgeous sugar coated apologies, that claim that ‘the internet will be a better place if we all were to #SugarCoatIt!’
The Chocapologies have been sent to celebrities, influencers, gamers and overall people on the internet who have been victims of cyberbullying and trolling. This probed recipients to share their stories online to get the conversation on cyberbullying going again and encourage people to #SugarCoatIt. Starting as a small initiative and snowballing into a massive campaign including at least 261 million people, ‘chocapologies is making the internet sweeter already!’
Prerna Mehra, head of design and creative director of the campaign took LBB’s Zoe Antonov behind the scenes of this sweet adventure to tell her more about the ideas behind it, the process of working with Karim and the overall results of the effort. 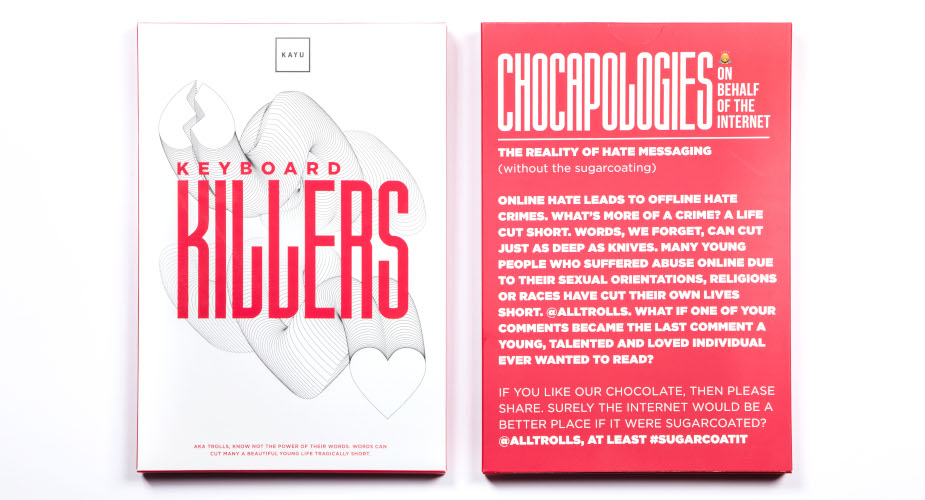 LBB> What was the brief for this campaign and what were the conversations around it?

Prerna> The brief was simple. How do you get people to think before they write on social media? Karim Bourgi being an influencer himself, felt that the internet, having its boom also has a lot of toxicity on it. And, the victims of this toxicity are left to suffer Low self-esteem, severe depression, eating disorders, lower academic scores, long-term psychological ailments, and, in more extreme cases, inflict self-harm, they retaliate through violence or sadly even take their own lives. How do we raise awareness about this dark side of the internet?

LBB> What are the main messages you'd like to convey to audiences through this campaign?

Prerna> The message is simple and to put it in one line it would be - the internet will be a better place if we were to #SugarcoatIt. And to spread this message we have handcrafted not one but three uniquely designed Chocapologies to raise awareness on the effects of body shaming, hate messaging, and cyberbullying. These are gorgeous sugar coated apologies with a strong belief that the internet will be a better place if we all were to #SugarcoatIt. We are also encouraging people to share whether they think the internet owes them an apology by DMing and sharing how they have been trolled on @chocapologies Instagram account for a chance to receive a giant bar of Chocapologies on behalf of the internet. 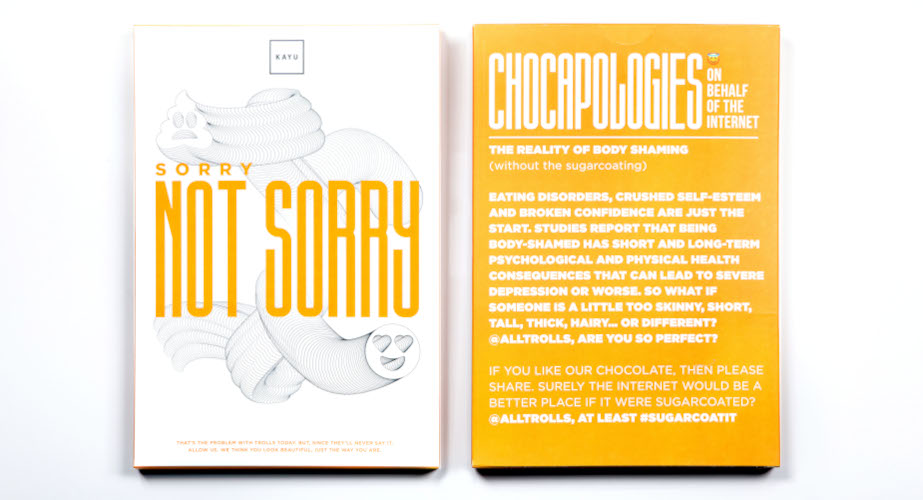 LBB> How did the designs of the chocolates come about? What was the process like?

Prerna> We wanted to show the effects words can have on people. It’s a graphic representation of people being bullied on popular social media platforms, whether it is the Instagram where body-shaming is extremely prevalent or twitch where kids get cyberbullied or YouTube where people get hate messages based on their colour, religion, or gender. We also chose these because they all have their unique style of Interface design and will look different when you put all three together.
The process was long, complicated, and not easy to say the least. We came out with the idea, but that’s all that we had. With no know-how of how to make a chocolate or a mould, we started on a completely blank sheet. After speaking to 32 vendors in China, two in Dubai, and three in India we finally zeroed on two vendors just because you can never be too sure. We briefed them both on the designs, and then we spent a month finessing the design according to the production limitations. We tried different substrates and methods, failed and learned from our mistakes. Well, that took long but one vendor came out as a winner. To cut the long story short we waited for another month before our moulds arrived from Morocco. The client helped us reach the people who provide the chocolate and that’s how all the pieces of the jigsaw puzzle came together…and then the rest is history.

LBB> What do you believe is the role of creative media in dealing with social problems such as cyberbullying?

Prerna> I hope there are more initiatives to raise awareness about such a grave and pressing issue. Today, three out of five children are bullied on social media platforms and what is extremely sad is that seven in 10 young people experience cyberbullying before they hit the age of 18. And this can have lasting effects on them. The impact of cyberbullying includes depression, low self-esteem, sleep, and eating disorders, lower academic scores, and victims of bullying in more extreme cases commit suicide or retaliate with violence.
Like the ‘Chocapologies’ campaign, we are hoping that the biggies (the TikTok and the Metas of the world) take notice and introduce strict ways to moderate the content. One should not be able to post offensive words or words that harm people. If the creativity of the agencies can push them to reassess and modify their product (ie: their platform) it will help the consumers and make the internet a better, safer, and sweeter place! High hopes, yes! But worth hoping for. 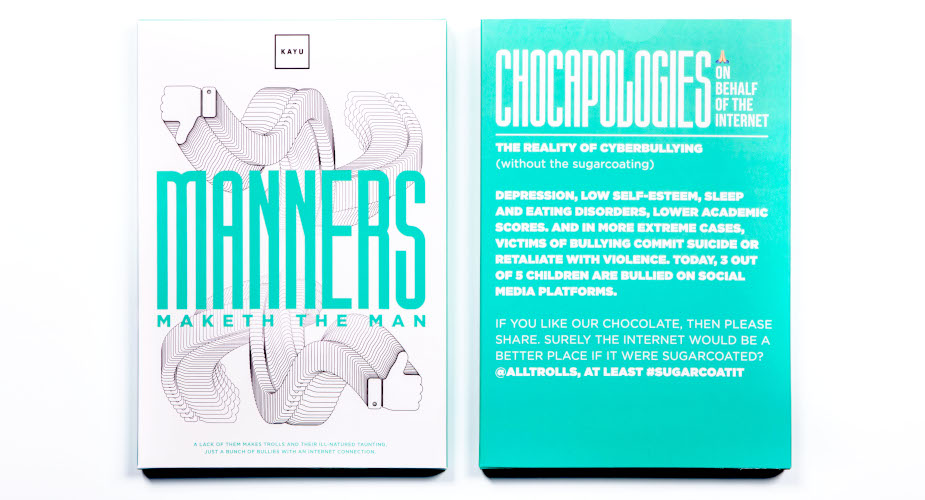 LBB> What has the reception of the campaign been like among audiences?

Prerna> The campaign has been accepted and loved by people. Our inbox is filled with congratulatory messages and heartfelt stories. In just a week we have +208% more followers and 134% more interaction. The campaign is running on popular social media platforms and has amassed over 261 million (and counting) people. It is well on its way to getting more eyeballs and traction in the coming few days. What started as an initiative has now snowballed into a massive campaign, garnering positive sentiment and love for the victims of trolling. Chocapologies are making the internet sweeter already!

LBB> Why did you choose chocolate as a medium for this campaign?

Prerna> Well, simply because chocolates are the finest creation of humankind and there is nothing that a giant piece of chocolate cannot solve.
Also, It's scientifically proven that chocolate boosts the production of feel-good chemicals called endorphins. Endorphins bind with opiate receptors in the brain leading to feelings of euphoria. They also reduce pain and diminish the adverse effects of stress. Chocolate is a good source of tryptophan, an amino acid precursor to serotonin, the neurotransmitter of happiness and positive mood. Chocolate is also the primary food source of anandamide, a naturally occurring compound called the "bliss molecule." Do we need more reasons?
Well, also because Karim Bourgi makes the best chocolates!

LBB> The packaging of the chocolates is also unique! Who came up with the design and what was that process like?

Prerna> I did! We wanted the visual to be extremely conceptual. The graphics have a thought behind them. If you look at the visual we have used popular emoticons that are a representation of the social media at the same time creating a story with the thumbs down, turning to thumbs up, a turd/shit turning into a smile, and a heartbreak turning into a full heart. The multiplicity of the visual is metaphoric to the amount of hate or love we can give on social media and the same has a domino effect. So why not sugar coat our words and actions.
Also, the subject and our chocolates are extremely serious so we wanted a visual dichotomy with bright colours. The copy was crafted by none other than Paul Banham my brilliant and amazing ECD who wrote each word with love and empathy, that touches your soul when you read it. That adds to the impact of the packaging.