Wunderman Thompson Saudi Arabia go for the most extreme remote shooting project as they head out to the desert to ‘Unveil Saudi’ for stc, writes LBB’s Laura Swinton 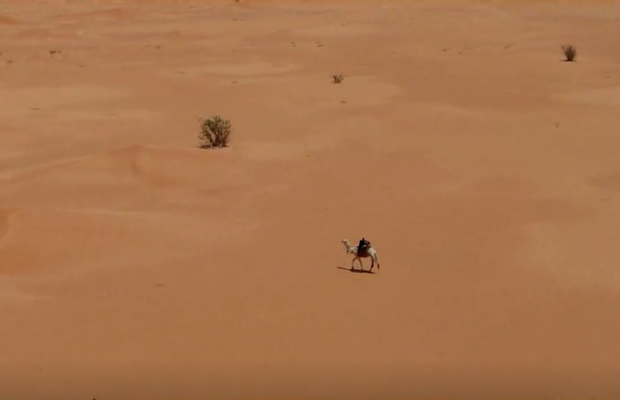 The ‘ship of the desert’, the majestic and inscrutable camel, can reach places we mere humans cannot. A recent campaign from Wunderman Thompson Saudi Arabia for telco stc takes full advantage of that fact, creating one of the most extreme ‘remote shooting’ projects we’ve seen. Sarha the camel headed out to the uninhabited and uninhabitable stretches of Saudi Arabian wilderness, mounted with a camera. Back in civilization, a group of top photographers were invited to shoot remotely. This allowed them to capture imagery of landscapes never before photographed. They’ve been shared online and the campaign functions both as a demonstration of stc’s network and coverage on a truly epic scale.
But while it’s a campaign that’s aimed at the local market, the images captured also function as an enticing advertisement for tourists. It’s all part of a bigger platform, called Unveil Saudi, that Wunderman Thompson has been developing for the brand – and it’s living up to that name.
The campaign captured the public's imagination. In just a few says it generated 1.3 million videos views and over 300 million total impressions. It was also embraced by local media, turning up in news reports for the country's biggest TV broadcaster MBC.
Rayyan Aoun takes us behind the scenes on a grand adventure that marries tradition with technology and reveals a brand new view of the Kingdom of Saudi Arabia.

LBB> What was the conversation with or brief from stc that sparked this project?

Rayyan> This project is a part of “Unveil Saudi” a bigger initiative we launched for stc; a long-term platform that demonstrates the power of stc’s network coverage through unveiling content about the country. In this year’s project, we utilised Sarha, the camel, and we were able to go further and unveil the unseen wonders of Saudi Arabia.

LBB> From a strategic perspective, what was the insight and how did you reach it?

Rayyan> stc has the largest network and widest coverage in Saudi Arabia thanks to its infrastructure. But lately, to win over customers, competitors were alleging the same. So, we asked ourselves: how can we put the network to the ultimate test and defend stc’s rightful claim? The obvious answer was to go places where no one had gone before.
And Saudi Arabia happens to be a big country with vast deserts, and many parts of the country are uninhabited, un-survivable and un-reachable by most, except for the desert camel; the only being that can easily get there.

LBB> Why a camel? You could have done a similar project with a drone or rover-type buggy, so how did the camel elevate the whole project? Was the camel part of the idea from the beginning or did that come later?

Rayyan> We heard a lot about the country’s most remote deserts, and how hard it is for humans to get there by simple means. We looked at who lives there, and it was obvious for us that it’s the camel.
The camel is a cultural icon that holds a very special place in Saudi Arabia’s heart. The animal is venerated for their good looks, grace, and speed. Most importantly, a camel is symbolised as the “ship of the desert”. It can travel long distances on harsh desert terrains and can visit places that are hard to reach on human foot.
Merging a primitive pachyderm and high tech is more interesting than going there with a buggy or drones. Besides, there are no roads and maps that can take you there and the terrain is quite dangerous for a vehicle to take. Having the story with a camel resonated emotionally with our audience. Eventually, we partnered with the Wunderman Thompson Seattle team and Wunderman Thompson Costa Rica and researched ways to involve technology and data and produce this project.

LBB> Tell me about the landscapes that Sarha explored – are they really so difficult for humans to reach?

Rayyan> Basically, nearly half of the country is uninhabited, and in the remote places we went to, there were no roads or maps that can lead you there; hence, you can easily get lost in the vast desert. Some terrains have sharp rocks for vehicles to drive through. Yes, there are other ways to get there, such as helicopters and professional buggy drivers… but this is not easily accessible for the masses.

LBB> The mix of a shaggy camel, which is quite analogue and traditional, and such a high-tech approach is really appealing – how do you hope people will react emotionally to that?

Rayyan> Ever since the project was launched, the reception from the public was extremely positive. People connected very well with the story of Sarha and what it did, and it was quite relatable. Even the Founder of the International Camel Organization and the chairman of the World Camel Polo Federation endorsed it and talked about this initiative. MBC, the country's biggest TV network, had a full-on report on the project and camels specifically and their historical role in Saudi.

LBB> The past year and a half has seen the advertising world really get to grips with the idea of remote production but this campaign takes it to a whole new level! How were you able to put that remote shooting/production knowledge to good use?

Rayyan> Absolutely, with the pandemic taking over, the production world witnessed a faster transformation towards a more remote-shooting style. We produced several films this year remotely. In this project, we put into good use Sony’s utilities, from the CamRanger to its software and a camera compatible with its system. Photographers were able to connect through a dedicated control centre we have developed.

LBB> How did you figure out which photographers to work with and what are they bringing to the content?

LBB> What were the most interesting challenges you faced in producing the content?

Rayan> Working with a camel is not as easy as it may sound. We had to cast a lot of camels to see which ones and which breeds were most suitable for the project. We learned a lot about how they behave and adapted accordingly. The project underwent a lot of testing before it was implemented on ground. A lot of troubleshooting was carried out in the testing phase, in the end it’s not something that had been done before.

LBB> How was Sarha being tracked and was she being guided?

Rayyan> In every region, we had a base camp where we would set up Sarha for her journey and do all the testing. Then we will let her roam freely in the wild and gave the photographers access to it. We had a tracker device on her to easily locate her. Moreover, the camel breed we picked after extensive research is called ‘Rahala’ in Arabic, which is a strong breed that is known and well-fit for journeying and covering long distances in the desert. It also has a higher endurance in extreme weather conditions. Furthermore, the chosen camel was a female, as this gender is known to be the better wanderer. Female camels tend to wander the desert during the day and return home during the night. We also always had a drone with us to easily find her.

LBB> What are the most surprising or striking images that you’ve seen so far?

Rayyan> Every photographer unveiled a piece of land that was astonishing. We did not expect to see such richness in the desert, especially when we look at the photos of Anthony Lamb and Najib Mrad.

LBB> The images and films are being shared on Instagram – but I was curious to know if it will be showing up in other media channels and what’s the PR engagement?

Rayyan> The gallery of all the photos can be viewed online on: unveil.laywagif.com. And we also have a dedicated Instagram page (@unveilsaudi) that shows the films, testimonials and data visualisation of Sarha’s journey with the photographers. The films also ran live on Twitter, Facebook, YouTube and Snapchat. Today, we are developing a Snapchat profile and special AR lenses for Sarha on Snapchat; in addition to an outdoor campaign that will showcase the unique and rich content that Sarha gathered.
It was also shared and endorsed by high profile people in Saudi Arabia such as the Head of the Private office of the Crown Prince of Saudi Arabia and the Chairman of the World Camel Polo Federation.

LBB> What’s fascinating about this project is that it is a great demo of stc’s network – but it’s also an amazing tourism campaign from Saudi Arabia! What sort of engagement is the campaign having outside of KSA and how do you hope it will change people’s perception of the country?

Rayyan> Definitely, after the country issued its first tourist visas a couple of years back, the country started opening up for tourism and this is part of the country’s new vision. This project beautifully showcases the wonders of Saudi Arabia. And this was also one of the reasons we wanted to work with international photographers and utilise their followers too, as they engaged with the project. And finally, as mentioned, the Head of the Private office of the Crown Prince of Saudi Arabia, Bader Al Asaker, endorsed the campaign and talked about it and encouraged more tourism initiatives to be taken.