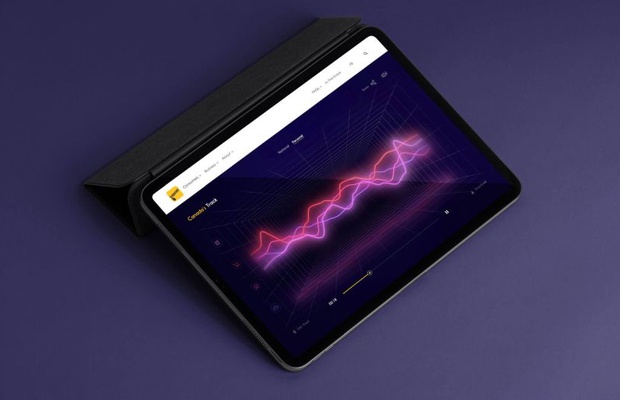 In this day and age, it’s incredibly easy to burn money very quickly. Whether you’re getting student loans, investing in a new car or even just paying for your weekly groceries, spending seems inevitable and the cost adds up quite quickly.
In fact, a 2019 study by the government of Canada found that over 70% of the country’s population was in some kind of debt - an ominous number. Interac wanted to find a lighthearted way to broach a difficult discussion with regard to the spending habits of various Canadian citizens. With the realisation that the spending graphs looked like soundwaves, it proved to be the perfect opportunity for new, musical compositions with a deeper meaning.
LBB’s Josh Neufeldt spoke to Zulu Alpha Kilo’s Wain Choi to discuss the creation of this campaign.

Wain> Given that 15 million Canadians live beyond their means, our goal was to make people more aware of their spending in an innovative way. When we saw the brief, we thought there was potential to do something that hasn’t been done before.

LBB> As we see at the beginning, 15 million Canadians live beyond their means. Did any other surprising stats pop up during the research process? How has this information impacted your approach to the campaign?

Wain> Another surprising fact we found was that 73.2% of Canadians are in debt. Interac’s new brand positioning is about helping Canadians stay in control of their money so we saw this project as an opportunity to help people be more aware of their spending.

LBB> The entire campaign is really informed by the data. Was the data the starting point of the process? Or did the idea come first? Can you speak a bit more generally about using data in a creative way like this?

Wain> The campaign started by looking at spending data in general to come up with the idea. Then we focussed on Interac debit data for the past year and a half to create the ‘Sound of Spending’ track for all of Canada.

LBB> Where did the idea to use sound as a way to demonstrate spending initially come from? Did you even know it was possible? How?

Wain> We noticed that Interac spending graphs looked like a soundwave. So we thought, “let’s turn one into another and hear spending for the first time.” We weren’t sure if it was possible but were excited to try.

LBB> Once you had the idea, what was the next step? How did you go about beginning to make this possible?

Wain> Once we had the idea, we worked with a web developer and audio engineer, exploring a few different ways to bring it to life. In the end, we really liked the simplicity of the approach we chose. Higher spending equals higher notes and faster tempo, while lower spending equals lower notes and slower tempo.

LBB> How did you work with the audio engineers to build the sounds of people’s spending and weaving all of that into coherent tracks? Was it quite a collaborative process or did you let the engineers run with it?

Wain>  It was a collaborative process over the course of a few months where we explored many different instruments and sounds. The hardest part was inputting the data and then getting an output that wasn’t just noise. Our team did a nice job of figuring out how to transition from one data point to the next in a melodic way.

LBB> Technologically, how did all of that work? Please explain the process of building the sound!

Wain> First, we built a barebones website prototype where we could feed spending data into our algorithm to get a sound. The prototype let us try out a variety of different instruments in dozens of different arrangements. Once we selected the instruments, we played around with how the data would affect the sound in terms of pitch and tempo. Finally, we designed a simple interface, so that anyone could put in their monthly spending and hear their track.

LBB> How did you go about selecting the spenders who featured in this video? And what was the process of working with them like?

Wain> We chose a cross-section of different Canadians with different spending habits and simply invited them to try out our website.

LBB> Strategically, what is the aim of this project? And who are you aiming to reach with it? Why?

Wain> Interac wants Canadians to be in control of their money and live within their means. The goal of the project was to make Canadians more aware of their spending habits in a way that didn’t feel dry or serious, but fun and approachable.

LBB> What was your favourite part of working on this project?

Wain> Seeing the project evolve. It was a lot of fun to play with the early prototypes and hear all the different kinds of instruments, sounds and tempos.

LBB> What were some of the challenges you faced while working on this project and how did you overcome them?

Wain> There were countless challenges but the hardest part was turning random data into sound that wasn’t just noise. Getting various data points to trigger the right notes in a melodic way was really core to the project and a hurdle that we had to overcome through trial and error.

Wain> We’re really excited for people to try out the tool and experience spending in a totally new way.