LBB speaks to Barny Wright, managing director of No.8, about how the creative sound and vision studio worked with David Beckham, Maserati, and Harmony Korine to create the stylish spot 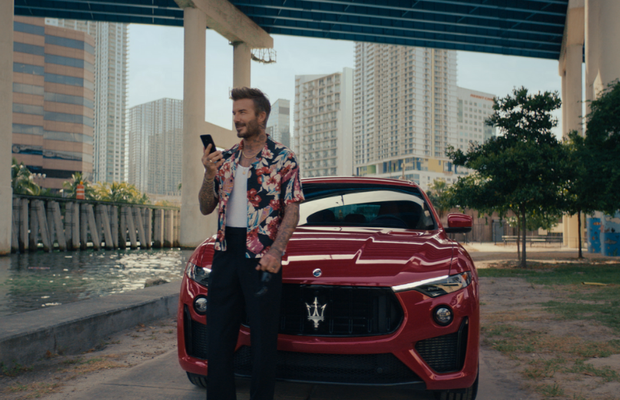 While we’re all more than familiar with David Beckham’s nimble skills on the pitch, he’s just as adept behind the wheel in Maserati’s latest ad for the Levante Trofeo SUV. David Beckham is Maserati’s brand new global ambassador, chosen not only for his status as a sporting superstar, but also for his trailblazing achievements in philanthropy and business. It likewise helps that he happens to be one of the most stylish men out there today.
Moodily captured by Harmony Korine, the ad shows Beckham performing ‘donuts’ beneath a Miami freeway. Korine (known for cult films like Kids and Spring Breakers) depicts a Miami of two halves; one sleek and ready to take on the working day, and a dirtier version concealed by the highway – open to possibilities for those who dare seek them.
No.8 worked with Droga5, Studio 99, and MJZ on the memorable spot. Vital to the ad was the post-production work of invisible VFX enhancements and the right audio mix, skilfully executed by the creative team at No.8, which highlighted the capability of the V8 engine to the very max. A thumping soundtrack opens the spot, instantly imbuing it with an infectious energy that revs up as the car springs into action. The sound of tires working hard on the pavement is unmistakable as the camera work and sound work in tandem to create a feeling of fluid motion.

LBB> What was your initial response to the brief for this project?

Barny> Excitement really. When Nicola Doring (Studio 99) got in touch, I knew it would be really good and exactly the sort of project we love working on at No.8. Cool car, amazing director and David Beckham, what’s not to love?! The schedule was insane, but I knew we could do it. Having control of the full post process (audio and visual) really helped with that; it saved so much time and also really helped the creative process.

LBB> And how close is the finished ad to your vision?

Barny> Spot on really. I generally like to step back and look at things a few days, weeks or months after we have delivered them. If the film still stands up then you know all the hard work was worth it. It was beautifully shot so we started from a really good place but I feel we elevated it, the sound design especially takes it up a notch.

LBB>  How do you usually approach working with a brand as big and iconic as Maserati?

Barny> We treat all projects with enthusiasm and respect to be honest. If you aren’t loving what you are doing then I think that comes across in the work. That said, with a brief like this it really doesn’t take much to motivate the team. This is what we set No.8 up for, great work with great people – it's that simple really.

LBB> Please tell us about the importance of VFX on an ad like this? How did you enhance the spot?

Barny> This is definitely one where I hope you can’t tell where we used VFX. Like any big car ad, there’s always quite a lot to do, but what Harmony (Korine) shot was beautiful, and Tim’s (Smith) grade is fantastic – they did all the heavy lifting on this one.

LBB> At what stage did you get involved and how did you work with the brief?

Barny> We were working alongside production and agency from the onboarding stage, but the real collaboration started during the edit really. With such a tight turnaround, it's super important to be involved as early as possible.

LBB> Are tight turnarounds typical for jobs like this? What adjustments do you make to get it done in time?

Barny> It was definitely all hands to the pump on this one because of the schedule. A big team and a few late nights. I think it’s important not to push people too hard though and try and help them maintain a good work/life balance. If they are working late because the schedule dictates it, then let's try and get out early or have a day off when it's not so crazy.
From an audio angle once we’d seen the first offline, taken a brief from the agency, and gone through all shoot sound, we then managed our time by breaking the project up into sections. The priority was getting the car sounds right whilst also taking into consideration how we treated the automated ‘voice, layering atmospheres etc – but also knowing we might have to adjust things depending on what music they were going with. The deadline was a Sunday so we knew we’d be needed for that weekend!

LBB> Did you face any interesting challenges during the process? How did you overcome them?

Barny> The schedule was challenging for sure, but with the right team and a client that trusts you, anything is possible. They knew we understood the brief and that we had the talent to deliver on it, so there were never any points where doubt crept in. That took the pressure off.

LBB> Can you tell us a little bit about the significance of sound when working with a car brand?

Barny> Car manufacturers are very proud of how their cars sound. They pride themselves on it, none more so than with the V8 engine. So every tire screech, engine roar or rumble of an exhaust is significant. The audio mix needs to respect and support the years of engineering and craft that goes into making the car.

LBB> What was the main focus for sound in this specific ad?

Barny> The car wasn’t doing your typical passing, interior, gear changes – it was doing doughnuts continuously for the duration of the film – so we were conscious of having to work on sounds you wouldn’t necessarily get from specialist car libraries. A lot of time and energy went into building the sound bed through a combination of what was captured on set and our own manipulation of that particular engine so that it didn’t sound repetitive and kept the audience engaged and excited. We feel that we succeeded with that and we're super proud of the result.

LBB> How much of the sound in an ad like this gets added in post versus what’s captured on the day of the shoot?

Barny> It really depends on how good the sound recordist is on set and how thorough they are. On this film the sound recordist was amazing and he managed to capture the sound of the car from various perspectives to help with variation – for example, if you have a shot of an exhaust you want to be able to hear it from there.  And it’s always a blessing when the recordist also manages to capture a separate wild track recordings to add to the palette of sounds you can potentially use – something the sound designers appreciate getting a heads up on ideally before the shoot.

LBB> What are some of the best bits about working with Studio 99, Droga5, and MJZ?

Barny> They are just all brilliant at what they do, their body of work stands for itself. Beyond the creative talent, they are also really nice people, super collaborative and trusting. They all just strive to deliver the best possible film and want to work with people that share that ethos.

Music: “Fall” by The Bug