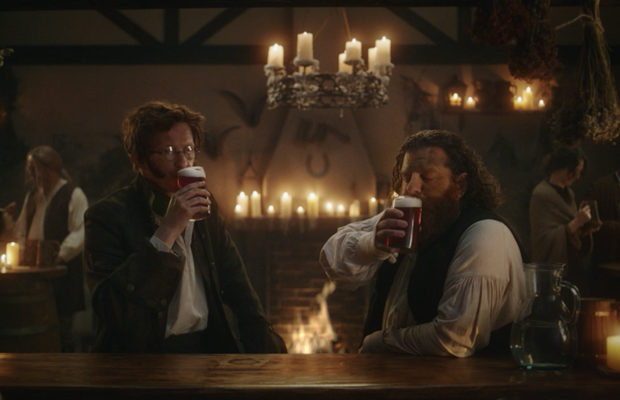 Smithwicks, the iconic Irish brand, have launched a new campaign to promote the amazing taste of Smithwicks. Created by their lead agency, Boys+Girls, the campaign is led by a new TV ad which launched this past Monday 29th November.

Smithwick's is a national heritage brand and has been in existence since 1710. The campaign task was to reinvigorate the brand and re-establish its relevance in the present day and into the future. The creative idea, Indescribably Delicious Since 1710, was borne out of the insight and core product truth that Smithwicks can be hard to describe, because it tastes like nothing else. It is smooth yet complex, light tasting yet rich in colour, balanced yet crisp but most importantly – Indescribably Delicious.

The TVC was shot in Kiev, directed by Nick Roney and produced by Antidote. It tells the story of two best friends who taste Smithwick's for the first time in a tavern in 1710. This sparks a debate between them about what they're tasting and how best to articulate the dichotomy of the experience. This debate ensues throughout the ages and into the future as we observe the friends deliberate through the electrification of Ireland, the millennium countdown and into 2222.

Speaking about the new campaign, Bridget Johnson, executive creative director on Smithwicks said, “Our research showed that people struggled to describe the precise taste and flavour of Smithwicks, but that’s never stopped them from trying. So why stop now? The great debate continues... Working with Nick Roney and the team at Antidote was great and we are excited to see it out in the world”.

The ad will run in Northern Ireland and Republic of Ireland from Monday 29th Nov and the campaign is supported by OOH, radio, digital audio and social.

Connection is the Answer This Christmas in Three Campaign