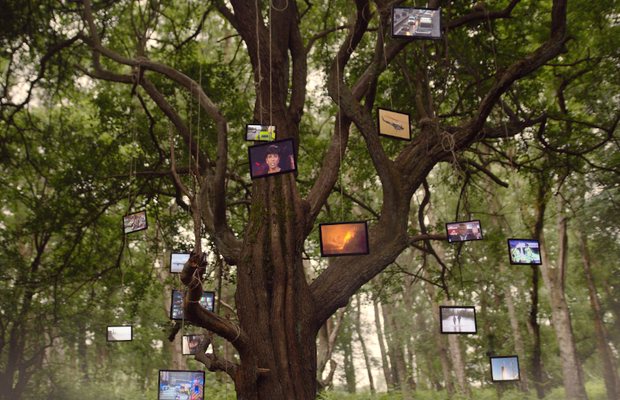 A unique collaboration sees the BBC, ITV, Channel 4 and Channel 5 come together for the first time to share a special film for all viewers at the same time across their biggest channels (21 channels in total will simultaneously broadcast the film). This rare TV moment will mark and celebrate the role UK broadcasters play across our culture. This poignant message is brought to life with the aid of Uncommon Creative Studio, who were appointed collectively by the broadcasters to deliver this brief to our screens.

In these unprecedented times, British public service broadcasters come together to share a formidable message – in a two-minute film – demonstrating the power of their television and digital services to bring people together during a period of profound uncertainty.

The film will air in a one-off roadblock special tonight (Weds 8 July at 8:58pm, ahead of scheduled programmes which will follow at 9pm as billed) on BBC One, BBC Two, ITV, Channel 4, Channel 5, STV, S4C, 4Seven, E4, More4, Film4, ITV2, ITV3, ITV4, ITVBe, 5STAR, 5USA, 5Select, Paramount Network, and BBC Four. It will also continue to play across all channels throughout the month.

The film takes us on a road trip across the UK, we journey through everyday familiar environments to more distinguishable and famous locations. We see farmers’ fields, Cornish coastlines, factory floors, London estates to the Angel of the North and the Royal Academy gallery. In every shot, flat screens and tablets continue to appear in these recognisable scenes, that make-up our lives and routines. The film was directed by Sam Walker through Pulse Films – the cinematic look and feel aims to create scale and tell the collective united story for our public service broadcasters during these uncertain times.

Nils Leonard, co-founder at Uncommon Creative Studio, said: “British TV reflects and shapes our culture and who we are. Our debates, our conversations, our communities and our characters are all reflected in the stories we watch every day. These are our stories. British TV matters – now more than ever. This cultural moment is the kind of brief we built the studio to make. We’re very proud to bring this moment to bear for our collective broadcasters.”

Rufus Radcliffe, chief marketing officer and director of direct to consumer at ITV, said: “Uncommon have achieved the extraordinary over the past few weeks. They have created a beautiful inspiring film bringing to life the power of public service television - all shot and produced whilst complying with COVID regulations. They expertly led and inspired all the broadcasters to take a leap of faith and the result speaks for itself - the power and impact of public service television beautifully articulated by the thought 'our stories are your stories'.”

The film tells a moving message of unity and pride through the lens of British TV. It draws our attention to the countless stories that have changed us and helped us see the world differently, reminding us of the role British TV can play in our own stories too, with the powerful point: “This is the story of everything we’ve done. And everything we could be. This is us. This is who we are. Our stories are your stories.”

Providing a unique perspective on the lives of people throughout the country is at the heart of each service – ‘Our Stories’ encapsulates this united core purpose. Free to air broadcasters also support and invest in the UK creative economy, commissioning programmes from independent production companies across the country. This is the first time such a collaborative and co-ordinated approach across the UK public service broadcasters to launch a campaign has been undertaken; the launch itself aims to reach 50% of the country’s adult population.

Tony Hall, BBC director general, said: “British free to air television - commissioned from the UK and produced in the UK – is here for everyone. We bring people together for the big moments - from a royal wedding to the World Cup. We are there at times of crisis and to provide comfort, laughter, education and entertainment. We do something special for the UK and provide authentic British programmes that our rivals simply don’t offer.”

Carolyn McCall, chief executive, ITV said: “Our mission is to tell stories for British people.  We aim to engage with our viewers at all levels and from all walks of life. From the most riotous entertainment shows, the humour, power and creativity of dramas and soaps to the depth and breadth of our documentaries and national and regional news and sport, our focus is on getting under the skin of the range of experiences across our culture, bringing our people’s lives centre stage and providing insight into how we see ourselves as well as how we look out into the wider world. As a broadcaster, we believe we have a key role to play in bringing people together and at this moment, during one of the most tumultuous periods in any of our lifetimes, we wanted to tell you about what underpins what we do and share that message with our viewers through this film."

Alex Mahon, chief executive, Channel 4 said: “Channel 4 has a unique role to play in public service broadcasting - we were created to challenge the status-quo and in doing so tell the stories that otherwise may not be told. This mission and with it our commitment to super-serve the young audiences who place their trust in us and authentically represent and reflect the diverse experiences of people across the UK, has never felt more urgent and important. This film is an incredible celebration of British storytelling and the beautiful, harrowing, funny and necessary stories we collectively share with the audiences we serve.”

Ben Frow, director of programmes, Channel 5 said: “The importance of PSBs is clear to see in this turbulent world. We inform and we entertain, with powerful content for everyone in Britain. At Channel5, viewers are at the absolute heart of every show we make, with a diverse and expanding range of programmes – from drama to documentaries, entertainment to the extreme world. We are proud to be part of this united campaign celebrating the role the BBC, ITV, Channel 4 and Channel 5 all play for the nation.”

Music Track: ‘Chrome Country’ from the album R Plus Seven