The scope of the project included a design system, an anthem festival open to introduce each day and show package materials used across a variety of media 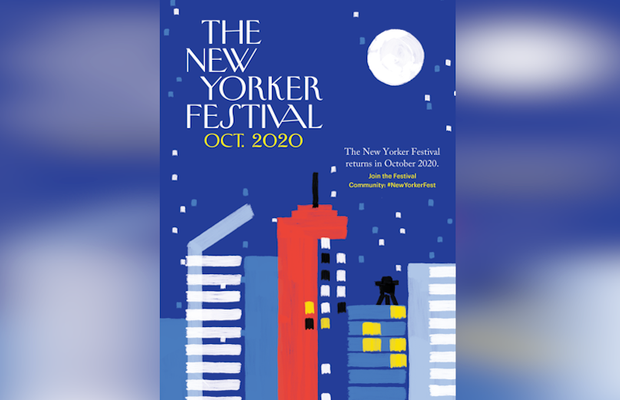 BUCK has unveiled its design work for the 2020 New Yorker Festival - the magazine’s first virtual ​version - which was described as 'an eclectic mix of conversations, performances, and experiences featuring some of the most talented and influential figures of our time'. The New Yorker Festival ran 5th - 11th October, in which discussions ranging from comedy to politics to the pandemic included guests such as Jerry Seinfeld, representative Alexandria Ocasio-Cortez, Malcolm Gladwell, senator Elizabeth Warren, Jelani Cobb and Dr. Anthony S. Fauci.
The scope of the project included the creation of a design system, an anthem festival open to introduce each day, show package materials used across a variety of media; including print, video, and various forms of social and digital platforms.
BUCK began exploration of the look for the festival by creating a poster that blended pure digital illustration with analog hand painting, digitally scanned and composited. From there, BUCK’s goal was to maintain a hand-made feel, exploring a cel animation process that put the visuals in motion, developed frame by frame in Procreate.
The visual system is rooted in colourful minimalism and makes room for both figurative and abstract imagery. At times, it showcases literal NYC scenery; featuring abstract shapes that move in conjunction with sound, movement, and text. This allowed BUCK to design for modular solutions in which scenes could easily be recut and rearranged - the essence of jazz, which was another influence on the piece. The system used to create a graphic toolkit for the project that includes branded title cards, lower thirds, animated transitions, and backplates for various uses, such as speakers and sponsor logos.
For BUCK, collaboration with The New Yorker was an 'absolute thrill', as its roots in legendary storytelling, culture, design and illustration matched well with BUCK’s pillars. BUCK was able to use much of its full suite of capabilities; from creative technology, to animation and design to create the look of this virtual event. Something BUCK has been fortunate to bring to the table frequently in 2020.