Cannes Contenders: BBDO Shares 10 World-Shaping Campaigns to Look Out for at the Lions

From changing a national anthem to tackling racism, BBDO’s got a selection of work in play that’s full of ambition 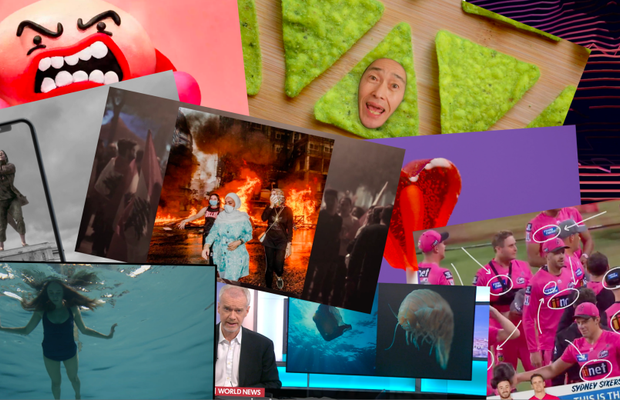 A little thing like a global pandemic hasn’t put a cramp in BBDO’s ambition or creativity. Over the past couple of years, they’ve made work that’s made raucous animations that have made women cheer in collective recognition, have taken up the cause of anti-racism in the wake of the Black Lives Matter movement, have joined forces with Monica Lewinsky to tackle cyberbullying, and are on the verge of getting a government to change a national anthem. And there’s some punchy fun in the mix too, with a zany Brazilian Doritos ad that made a splash in Japan and a hilarious media hack that has bowled over cricket fans.
As they can’t celebrate and cheer each other on in person, creative leaders from around the network are patting each other on the back virtually, spotlighting the work they’ve loved from other offices.

UK
This vibrant, visceral campaign from AMVBBDO in London is a favourite of Brendan Willenberg, Executive Creative Director, Clemenger BBDO, Sydney, who says: “When the world first saw #bloodnormal, we all thought… how will they ever top this. #wombstories is how. It is everything you’d expect from AMVBBDO; creativity, craft and cause. It is receiving accolades all around the world and rightly so. Bravo.”

Germany
Alex Grieve, Chief Creative Officer, AMVBBDO, London found this campaign from his colleagues at BBDO Germany really impactful. “There have been lots of ads about plastic pollution.  This one cuts through because WWF haven’t made an ad, they have named a new species.  And in doing so have left a permanent and haunting reminder of the damage we are doing to the planet.  This is an ad that isn’t an ad that might just work.”

US
A powerful and chillingly accurate campaign that resonated with Ali Rez, Regional Executive Creative Director, Impact BBDO Middle East and Pakistan. “The beauty of this film, besides the fact that it delivers a punch in the gut that stays with you forever, is that it accurately mirrors the horror that continues in America: the parallel of the cheerful traditional back-to-school ad against the repeated horrific incidents of school shootings. Despite the murder of innocent children, we are somehow expected to just smile and carry on regardless - the notion itself is as insane and horrifying as the feeling you get watching this PSA. This film made me cry, it made me hug my son, it made me angry, and it made me send an email to my Representative. That is one hell of an effective PSA.”

US
This creative came out of BBDO New York, tackling a global issue that's often hidden and Till Diestel Chief Creative Officer, BBDO Germany finds it utterly haunting: "Cyberbullying is unfortunately often something we can’t see and still don’t talk about enough. And often we need to feel things first, to better understand and start to act. So, The Epidemic created an immersive, haunting experience that will personally invade you, so you won’t forget and will think differently. At the same time, it will give you a toolkit for better understanding, to act and help others."

Lebanon
Alex Grieve, loves the campaign that made women’s rights front page news. “What better way to get the nation talking about women’s rights than changing the words of the national anthem to, for the first time, include them. And then printing those words on the front page of the region’s most influential newspaper.  That is a scoop.”

Australia
Rexona hacked the most unlikely media space – and Ali Rez loved it. “Sporting arenas are inundated with logos, most of which are slapped on to any surface available without much thought or creativity. It is a brave brand that decides to go up against this constant tsunami of branding with … yet another logo. But not many brands have made this good a connection of where their logo is placed as Rexona has. It’s highly disruptive, and in a welcome, ridiculously entertaining, and memorable manner. In cricket, the umpire raises their pits-revealing arms to signal a ‘six’ - the maximum runs a batsman scores off a hit that goes out of the park. To me this brilliant idea is a ‘twelve’.”

Germany
For Darren Wright, this campaign from his colleagues in Germany is a great example of work that pushes advertising forward. “As we’ve seen across all the entries, creativity is one hell of a powerful tool.  It can raise awareness, rally us to action and at its best help solve the most difficult of problems.  Life Lolli, did all of these. With the very real issue of two children being diagnosed with blood cancer every day. It would have been easy to write a campaign to just bring this statistic to life. But much more effective to design a product, disrupt a category and engage an audience who were the most important to the cause, but the least likely to act. A great idea. Well executed. And I’m hoping a very, very effective one.”

Brazil
Eclectic, electric and energetic, this gleeful Doritos spot from Brazil has caught the eye of David Lubars, Chief Creative Officer and Chairman, BBDO Worldwide. “It’s impressive when the assignment is something that’s been done trillions of times before – introduce a new flavor – yet the team finds an effervescent, talked about, rule-breaking, highly successful way to do it.  Inspiring.”

New Zealand
Robin Fitzgerald, Chief Creative Officer and Chairperson, BBDO Atlanta found this work from New Zealand affecting and necessary: “This immersive experience is so intimate, it’s impossible for anyone listening to hide from their own thoughts and past actions. It’s a much-needed tool to move people from saying “I’m not racist” to consciously being anti-racist with every action they take.”

US
After a year when protests in response to the murder of George Floyd rippled round the world, this campaign from BBDO North America impressed Luiz Sanches, Chief Creative Officer and Chairman, AlmapBBDO. "2020 was a very intense year around the globe, pushing many to realize injustices that have gone unnoticed for too long. 'The Pedestal Project' plays a valuable role in promoting conversation around the important topics of racial equality and fighting prejudice in the US. It is a wonderful initiative that conveys pride by celebrating important Black figures—a great example of fighting intolerance with information, empowerment, and representation."