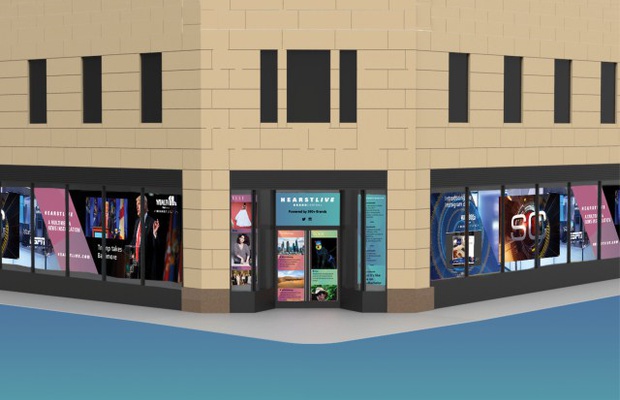 The street level display is housed in the base of Hearst’s headquarters, the landmarked Hearst Tower at 57th Street and 8th Avenue. No destination in New York City showcases continuously updated news, entertainment and information at this scale and proximity to street level—until now.

“We’re thrilled to offer New York a visual, technological and social experience unlike anything they’ve seen before,” said Hearst President and CEO Steven R. Swartz. “Our iconic brands entertain on every screen, device and format—what better way to give people the opportunity to interact and engage with dynamic, timely content from our businesses and partners than in this innovative format.”

Swartz continued, “Ten years ago, Hearst Tower made history as the city’s first occupied green skyscraper. As we approach this anniversary, we are proud to be the first to build an LED ‘sculpture’ merging news, information and entertainment.”

Seven days a week, passersby can view curated content from Hearst’s brands and partners including A+E Networks, Complex, ESPN and Vice; its 30 television stations such as WCVB-TV in Boston and KCRA-TV in Sacramento, Calif.; nearly 300 magazines around the world including Cosmopolitan, ELLE, Harper’s BAZAAR and Car and Driver; 17 daily newspapers including the Houston Chronicle, San Francisco Chronicle and Albany Times Union; digital and video companies such as BuzzFeed and AwesomenessTV; and information and services sources including Fitch Group, Hearst Health, among others.

More than a quarter million people pass by the intersection of 57th Street and 8th Avenue each week, making it an ideal location for a highly visual destination like HearstLive, which provides a true “window” into Hearst brands. The 59th Street-Columbus Circle subway stop—home to the Time Warner Center and Jazz at Lincoln Center—is the seventh busiest transit hub in New York City.

“At Hearst, we are constantly delivering exciting ways for audiences to connect with our content,” said Hearst Chief Technology Officer Phil Wiser. “HearstLive presents an entirely new medium to deliver news, entertainment and information, and allows for an unprecedented level of updates and engagement with our brands.”

“So much of our audience is on mobile and online platforms, but there’s something special, unique and unexpected about engaging with such great content at the street level,” said A+E Networks President and CEO Nancy Dubuc. “Hearst makes smart investments and partnerships across important industries, and HearstLive is the perfect opportunity to highlight the amazing innovations coming out of all of those brands.”

“Hearst and ESPN are both parts of consumers’ everyday lives in so many ways,” said ESPN President John Skipper. “HearstLive will allow sports fans to engage with the sports entertainment experience. We look forward to sharing content in this exciting new forum.”HearstLive, in development since fall 2015, is a technological achievement in itself. The concept and execution was developed by New York-based creative digital agency Code and Theory. New content for HearstLive is produced multiple times a day by a team of editors and designers at Hearst. The digital canvas features Hearst’s content in a variety of ways including slideshows, videos, live streaming and animation. HearstLive is powered by award-winning digital signage software Sedna, and the physical screens at HearstLive are made up of 1,348 custom-engineered LED modules. The entire installation uses 7 million LEDs fabricated specifically for this project. A custom-built application utilizing WebGL displays within the HTML5 markup language powers the visual output to the LED displays.

Activate the Space was chosen to design and integrate the LED technology as the hardware partner due to its expertise in LED displays and extensive portfolio of projects in Times Square and retail spaces around the world. Activate the Space worked with Hearst, and Code and Theory to achieve an appearance which parallels the “diagrid” structure of Hearst Tower. The unique design results in a completely custom display of nearly 600 individual, angled LED modules to deliver over 100 stories on HearstLive each week.