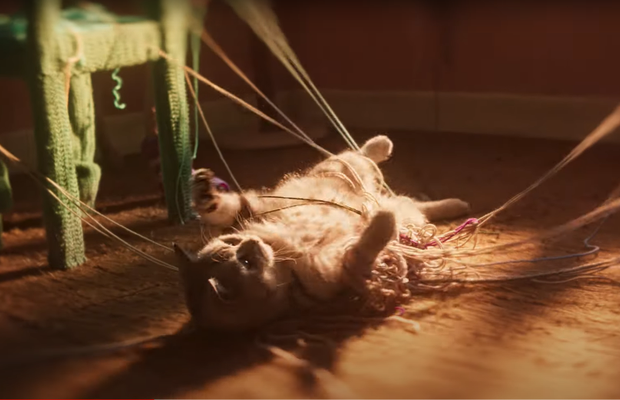 In a world-first that you never saw coming, WHISKAS’ new advertising campaign centres on a set of musical compositions made specifically for cats.
The global brand campaign, Purr More features a suite of films from BAFTA-winning animator and director Nina Gantz (represented by Blinkink) and original music from National Symphony Cellist and 'Animal Composer' David Teie. His work has been scientifically proven by the Journal of Feline Medicine to reduce cat’s stress levels, so the tracks are made for feline ears, but can also be enjoyed by their humans.
Created by AMV BBDO for the cat food brand, each film takes us inside a cat’s imagination to better understand what happens when they purr. The scenarios were built from things cats love, such as cardboard boxes, wool, and laundry and each asset contains a unique brand mnemonic precisely designed to appeal to the felines.
The WHISKAS team also have plans to print a limited-edition collectible vinyl. Each record has a fish printed on the top that will revolve when played and entertain cats as they enjoy the music. Influencers will be invited to play it to their cat and share the interaction on TikTok, encouraging others to do the same.
On the face of it, this is quite a silly project. But it turns out that a lot of very serious thought went into provoking more purrs around the world. LBB’s Alex Reeves spoke to AMV BBDO creatives Jack Smedley and George Hackforth-Jones, composer David Teie and director Nina Gantz about making feline dreams come true.

LBB> I love that this is a campaign with a playlist of music at the centre. It's much more than a TVC! When did the idea first get to that kind of shape and why?

Jack & George> We wanted an idea that would live beyond film and getting inside the heads of cats helped us do that. It’s all about the purr. WHISKAS exists to make cats happy, and a purr is the ultimate sign of cat enjoyment so arriving at a campaign where every element is designed to make cats Purr More just made total sense. The more we looked into what makes a cat purr, the more differences we found between them and humans. Cats hear at a different frequency to humans, so it makes sense they’d find different sounds pleasurable. We had a lot of fun composing music specifically for cats.

Jack & George> The bond between cats and cat parents is special and right at the core of what drives WHISKAS. Anything we can do to strengthen that connection, be it taking you inside the mind of your beloved pet, providing music you can listen to together, or making food they love, is what drives the brand. WHISKAS prides itself on knowing cats.

LBB> How did you come to select the various scenarios in the campaign?

Jack & George> We wanted to bring to life the feeling of a purr, so the fun part was trying to visualise a cat’s imagination. Everything in the dream sequences is crafted from things cats find pleasurable. Cats are fascinated by fish, playing in the laundry basket, and chasing balls of wool so these insights form the basis of each scenario.

LBB> How did you find 'animal composer' David Teie and what convinced you he was the right man for the job?

Jack & George> We discovered David, a national symphony orchestra cellist, online and noticed he had experience composing music for animals; he was the perfect choice.

LBB> And David, what did you first think of the brief?

David> I have to say that my first thought was that I was impressed that the creative team was willing to reach out to me. I appreciated their recognition of the science behind my work and their willingness to find a way to include it in the campaign. I’m always pleased to hear from people who recognise that species-specific music can provide enrichment and comfort to animals.

LBB> How did you approach the composition and what were the big decisions along the way?

Jack & George> When creating the music, we had to balance out our human and feline audiences. Instruments and frequencies that make cats purr, don’t necessarily sound as good to human ears. As this project is all about bringing cats and humans together, we had to strike a balance between it being something both could enjoy.
David> One element that is included in all the songs for cats is the sound of a "suckling” instrument. (The suckling sound is, basically, for cat music what a pulse is to human music. You heard your mother’s heartbeat as your brain was developing - a kitten hears its own suckling as its brain is developing.) This composition gave me an opportunity to try a new approach to the suckle instrument - I recorded with a hydrophone inside a block of tissue-density gel and sprayed the outside of the gel block. I am happy that this improved instrument is a part of the new music for cats, thanks to WHISKAS. 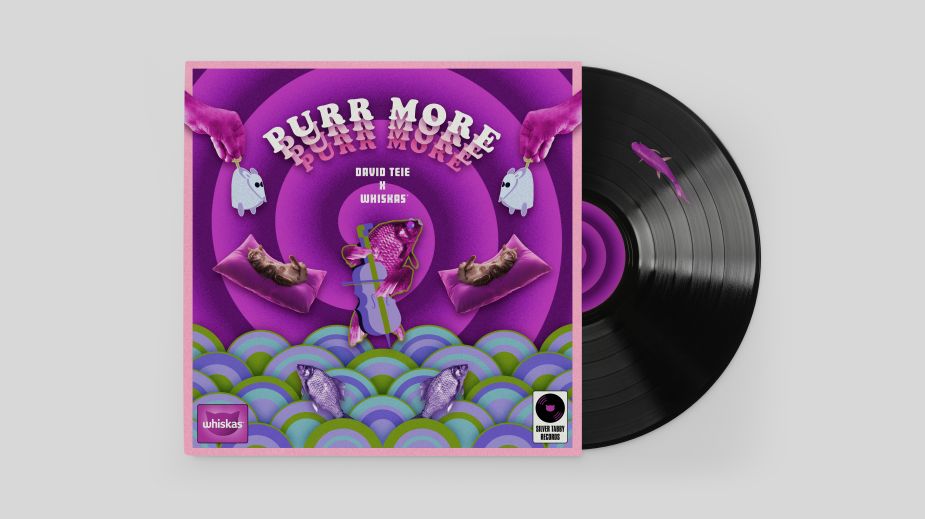 LBB> Why was Nina Gantz the right person to bring the visual aspect of the campaign to life?

Jack & George> Nina is one of the most exciting craftspeople we’ve come across for a long time. She’s an expert animator and has a real talent for turning any material you can imagine into seamless stop motion. We wanted to make a film with cats at the core so crafting it from the cardboard boxes cats love playing in, wool they adore chasing and laundry they enjoy jumping in was critical. Nina took these materials and turned them into a magical cat nirvana.

LBB> Nina, this looks like a fun brief. What were your first thoughts on what you'd do?

Nina> I love cats so very much, so I was immediately very excited by the idea of diving into their psyche.
Trying to find out what a cat likes and what makes them purr is a challenge in itself as each has such a strong own character - but therefore even more satisfying when you can see what ticks their boat.
Looking at the brief by Jack and George, they wanted to make each cat dream stand on its own by choosing a variety / mixture of crafts. I was immediately drawn to the idea of making the dream worlds out of material cats love, like cardboard, bed linen and woollen string.

LBB> How did you make the films? What were the big challenges?

Jack & George> Working with cats was never going to be easy. As any cat owner will know, they have a way of doing whatever they want. That’s why we love them. It’s also why you must be patient when your lead talent would rather lick its bum than take direction.
Nina> Working with live animals is a well-known challenge. Coming from an animation background, I can make characters do exactly what I want them to do frame by frame. Trying to mirror the storyboard with the live cats was the biggest challenge and we really had to think on our feet to make it work, however, that meant that we got some real gold. For instance, the cat lying on its back, relaxing on the pillow was possibly the easiest to shoot. He was actually loving it!

LBB> What were the most memorable moments of the whole project?

Jack & George> Seeing the animated cat paradise slowly come to life was a magical thing. Equally, watching a grown man play the cello to a cat is not something we ever imagined signing up for when going into advertising. But equally incredible was seeing the reactions of anxious rescue cats visibly calmed and even purring at the music we created.