To launch the BBC’s coverage of the upcoming Beijing 2022 Olympic Winter Games, BBC Creative and Blinkink have partnered to create ‘Extreme by Nature’ – a mixed media animation that captures the intensity of the competition through the harsh worlds of ice and snow.
The piece combines in-camera effects and post with intricate stop motion animation and entire scenes 3D printed frame-by-frame. As well as running as a trailer across channel junctions and online, the animation will feature as the title sequence for The Winter Olympics Games, which starts on Friday February 4th, across the BBC. Covering over 300 hours of live action over 14 days, and streamed on iPlayer as well as on the Red Button and BBC Sport, it’s set to be jam packed with winter sporting talent.
Blinkink’s director Balázs Simon explains his motivation for embarking on the BBC Winter Olympic project, “I really admire people having the will to push things to the limits. What could be a better example of that than the Olympics? Especially the winter games where they compete in environments that are so different from our usual experiences.” And when asked what he initially thought: “When I got approached by this project, the biggest question for me was how to portray and live up to that dedication.
“ Although most of my work is tied to digital animation, I'm most intrigued by the physical reality and the uncertainties that come with it. In a way, I wanted to find myself in a similar situation as the Olympians: in a foreign, unforgiving place that needs to be conquered.”
It was important to capture the athletes, their dedication to sport and the endurance it takes to become a Winter Olympic athlete. Balázs says, “This resonated well with our controlling idea: to be able to compete, these people must be made of something different. We wanted to portray them being born into ice and snow and eventually breaking out.
“I have to say the film turned out to be quite a challenge! But you can't hope for a better team and client, especially when things are so experimental. It would be hard to make a list of what went south or simply against our expectations, but there was always somebody coming up with an alternative solution.”
Balázs then shares his favourite aspects of the campaign’s creation: “My personal favourite task was coming up with a solution for the camerawork in the snow scenes. To get a first hand experience of the characters' efforts, I wanted to bring the viewer as close to them as possible: a great example of how a seemingly simple creative decision could grow into a big web of intertwined technical challenges.” 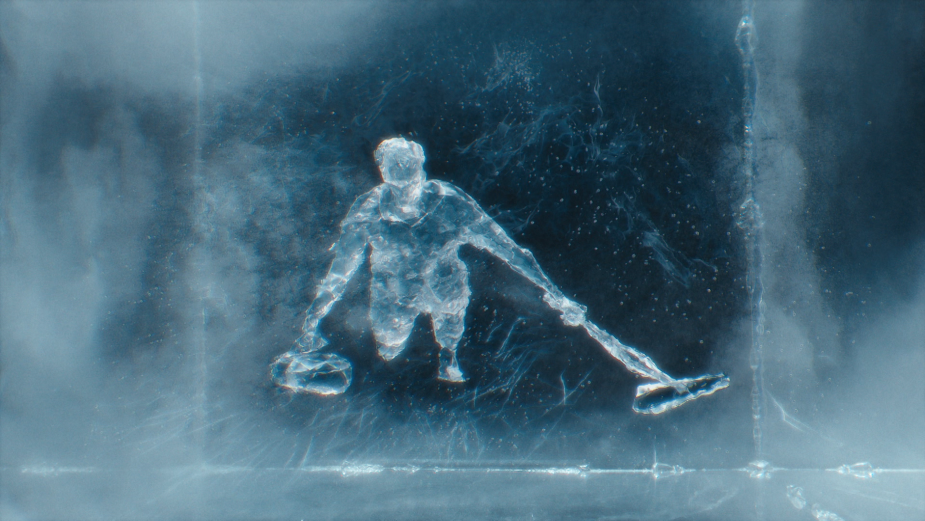 Part of the campaign’s challenges included the pace of shots as the camera work needed to be authentic in capturing sporting adgility. “Going close-up with fast moving cameras to keep up with the Olympians. We wanted to have a dynamic feel for the shots themselves as well, not just the content in the cubes, so we also had to move the real world cameras,” says Balázs. And this prompted discussion within the team about how to shoot scenes.
Balázs says, “We started to think about cameras differently: some of their motion would be directly ‘printed’, and some would be actual movement of the control rig. We designed an artist-friendly way to split the camera into two components: animation to be printed and animation to be programmed on the moco rig in a way that their composite movement would result in the intended motion set up in the previz.”
It’s no doubt that this was a lengthy process that took painstaking precision, but initially, it didn’t turn out exactly as Balázs planned. “When that was done, I was excited to finally create the box cutouts. To my horror though, the scenes made no sense visually! We essentially lost all of the environment around the characters, it just didn't fit in the small space. Without a point of reference, the Olympians lost their sense of speed, and what's worse, the supposedly harsh environment they competed in became nonexistent.” 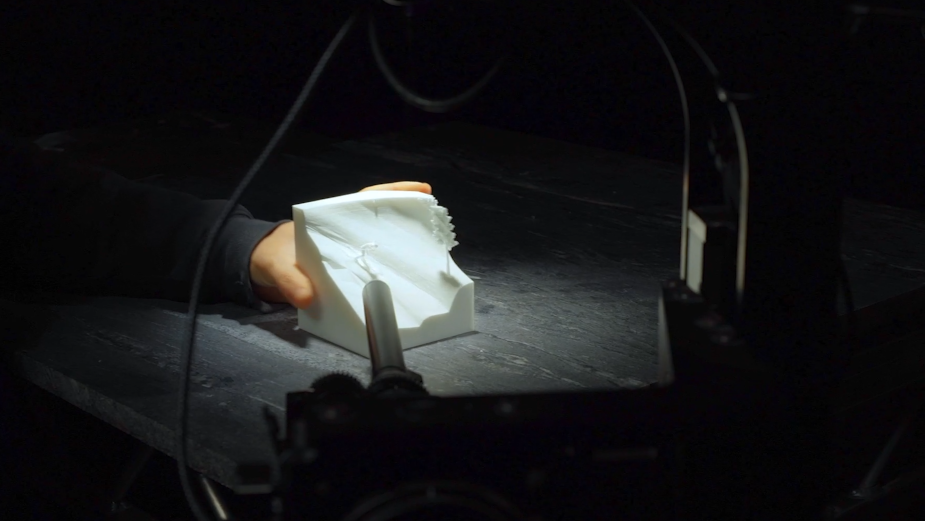 The unique challenges of the shoot and scale of production meant that the team needed to take a moment to decide how to carry on: “When undertaking such a large scale project, the team had to decide how to reinforce the clarity of each shot, while telling the story and being visually appealing,” says Balázs. “So we had to find a way to squeeze everything into the cubes. That's how the forced perspective idea came in, which we had to solve completely algorithmically: we had deep spaces with characters moving close and far away, followed by fast, rotating cameras. There was no way of figuring out how to distort everything by hand.
When seen from the camera, the scenes make sense, but from any other angle, they're pretty abstract and distorted!”, Balázs explains.“Once that was figured out, we had to align the animation to the limitations of the real world. For example, trees in the background became paper thin due to the extreme compression. We had to compensate for this to be able to print the sets.
“We couldn't just make bigger prints because in that case we would've lost the unique texture and how the material reacted to light. Thus, we had to go with macro shots, where we quickly reached the close focus limit. That meant having to shoot wider, messing with the effective focal length, getting us back to the start with camera pathing… This turned into technobabble quickly, but it illustrates our basic experience! So much back and forth between departments, which wouldn't have been possible without such a devoted team and expert coordination.”
The incredible team made sure that the project was a success and achieved the goal of effectively showcasing an Olympian’s trials and tribulations throughout the Winter Games. Complimenting the team he worked with, Balázs says, “From finding the right mixture for the 3D prints, designing rigs that moved objects, lights, and cameras to all the post work to make it look seamless - everybody brought their A-game to the table
.
“I can't be thankful enough, and I'm sure all of us have a great sense of accomplishment knowing that in our way we also conquered the elements, like the heroes in the film.”