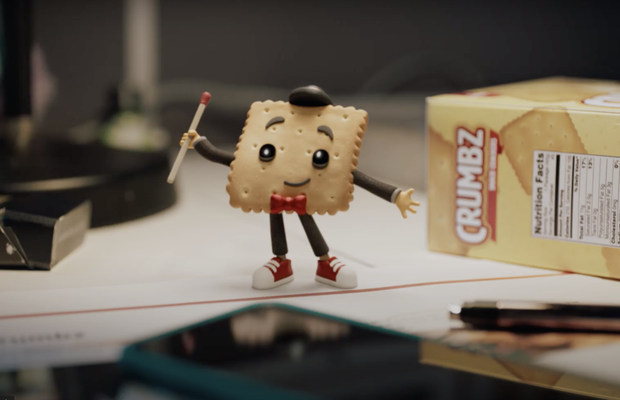 In recognition of World Mental Health Day on October 10th, nabs tapped Cossette to create a film that helps heighten awareness about the resources available through the organisation, and aims to erase the stigma around mental health within our industry.

The film features Crumbles, a simple cracker who understands what it’s like to crumble under pressure. As a loveable voice of reason, Crumbles is here to remind us that our passion, productivity, and dedication to the job doesn’t need to be sacrificed at the expense of our mental health and wellbeing. And with this digital campaign, nabs hopes to start a much-needed conversation that encourages the industry to come together to tackle these challenges head on.

“Now is the perfect time to start a conversation about the state of our collective mental health and wellbeing. During the last 18 months alone, the demand for our services has skyrocketed, with over 3,600 people reaching out to us for various reasons including mental health issues, unemployment, illness and financial difficulties,” says Mark Neves, director, Central at nabs. “We hope that this campaign encourages people within the industry — from all levels of seniority — to recognise the signs of mental burnout and distress early and take advantage of the many services and resources that nabs has available. No one needs to go through this alone.”

“During the pandemic, the lines between work and home blurred, and many of us — myself included — have found ourselves working harder and longer than ever before,” says Cat Wiles, chief strategy officer at Cossette. “A lot of us are still working from home and still trying to find the right balance, which makes this film incredibly important and timely.”

In order to capture the interest and attention of the industry, the Cossette team knew that they needed to add a bit of levity and use humour to get such an important message across.

“When we read the brief, we knew our biggest challenge was going to be creating something for an audience whose tolerance for BS is pretty low,” says Jacob Greer, creative director at Cossette. “If we wanted to really get through to our colleagues, we had to come at it from an angle that was brutally honest, but also funny in a very relatable way.”

“We all love what we do, which makes recognising the signs of burnout even harder,” says Nicole Ellerton, creative director at Cossette. “Crumbles is here to tell it like it is — sometimes this job can take more than it gives, so as an industry we need to make more of an effort to take care of ourselves and look after each other.”

The campaign will run entirely on digital and social media and will be amplified by influencers and execs within the North American ad industry sharing stories about their own mental health challenges. The film’s original song This Job Can Break You will be available to stream on Spotify starting on October 11th.

Title: This Job Will Break You