The campaign was created in partnership with Planet Propaganda, the retailer's agency of record 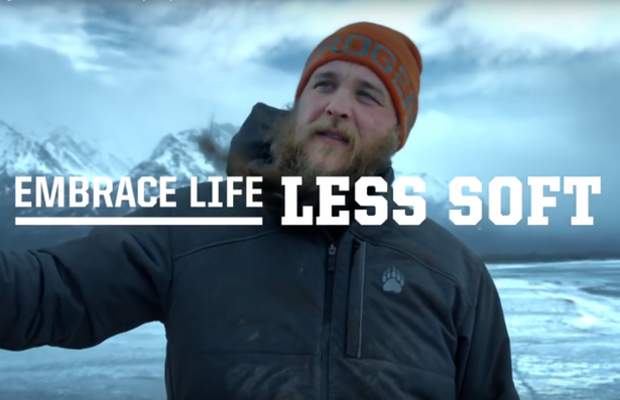 Workwear retailer Duluth Trading Co. is unveiling the first major advertising campaign for its Alaskan Hardgear brand in partnership with its longtime agency of record, Planet Propaganda.
Since being acquired and integrated into the Duluth Trading brand in 2014, Alaskan Hardgear has experienced strong year-over-year growth mainly driven by promotion on Duluth’s website, dedicated catalogues, email campaigns and in-store merchandising, and now the time feels right for a more creatively-driven approach. The new campaign’s tentpole is a 30-second spot that showcases the exploits of real Alaskan workers in an imposing winter landscape, playfully juxtaposed with Leslie Gore’s 1963 hit song ‘Sunshine, Lollipops, and Rainbows.’ Fifteen-second spots cut for digital and social feature the same depictions of rough Alaskan life, bookended by the brand’s ‘Live Life Less Soft’ mantra.
The campaign is the product of twice-yearly trips to Alaska that Duluth Trading and Planet’s creative teams have taken in search of real workers—from avalanche hunters and lumber mill workers to dockworkers and ice harvesters—to serve as authentic avatars for the brand’s Alaska-tough performance workwear. It also marks the first time Alaskan Hardgear is being advertised on streaming TV and digital/social video.
“We’ve been busy building Alaskan Hardgear with high hopes that customers would embrace performance workwear built, tested and proven to stand up to Alaska’s notoriously tough conditions,” says Ricker Schlecht, Duluth Trading’s VP of product development and creative. “Now that we’ve built a strong foundation for the brand, it’s time to further spread the word by supporting it with memorable, benefit-focused advertising: a strategy that helped put Duluth Trading Co. on the map. Now it’s Alaskan Hardgear’s turn for prime-time treatment.”
“We’ve spent a lot of time in Alaska the past several years, meeting some of the toughest workers in the world and hearing their stories. We’ve seen and heard firsthand that these guys don’t come to Alaska because it’s easy; they thrive because it’s not,” says Dana Lytle, Planet Propaganda Partner / CEO / ECD. “It’s fair to say that Alaskans embrace a uniquely pragmatic but optimistic worldview, and this campaign captures that mix of no-nonsense with a tinge of gallows humour. It’s great to have the opportunity to build on the success the brand has established through Duluth Trading’s catalogues and retail stores by adding a layer of evocative video work.”