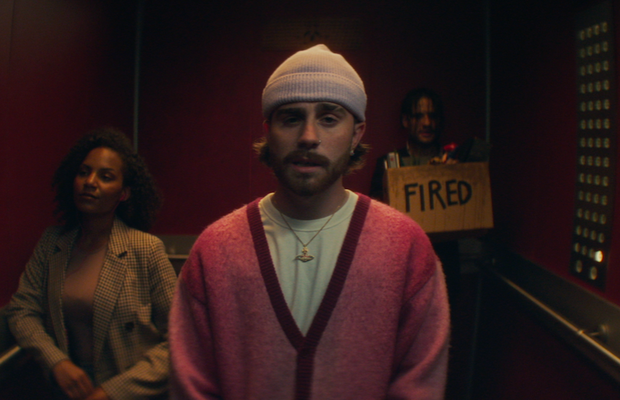 For his inaugural music video, and first piece of work since signing with award-winning production company PRETTYBIRD, Josef Bates has directed musician Sam Tompkins in a joyful promo for his new track ‘(W)hole’.

Josef Bates’s direction and storytelling gives an uplifting edge to Sam Tompkins’ melancholy lyrics, as the musician is filmed in a lift which gradually fills up with an eclectic cast of characters. The promo was produced by Chris Murdoch at PRETTYBIRD, with director of photography Adric Watson.

The accompanying music video for (w)hole is directed by award winning TV/Film director Josef Bates and set inside an elevator. A metaphorical deep dive into Sam’s mindscape, it charts his journey from a state of disconnect from hope and the positive side of life, back to happiness but by the end once he finds an escape.

Produced by Laconic, the emotionally charged (w)hole not only showcases Sam’s powerful vocals but also his ability to intimately convey his own relatable experiences through candid, heartfelt lyrics. We all, at times, need to find that human connection to bring us out of an ocean sized hole. (w)hole is the first official release from Sam Tompkins in 2021, and the first cut to be taken from his upcoming third EP release.

Director Josef Bates commented: “Shooting ‘(W)hole’ was such a riot. We shot the video in a one WHOLE day (pardon the pun) and we all treated it like a party, keeping the energy building through the entire thing. I was so impressed with our set build which was designed from scratch and our Prod designer, Dale managed to capture everything I was going for with that location. Bravo Dale. I was very lucky to have such a generous brief. They were keen to build the idea from the ground up. We went with something that leaned into this idea of feeling disconnected from the world around you because of whatever you might be going through at the time. Not being able to notice the positives and having to pull yourself out  from the hole you may find yourself in. I wanted to portray this idea in one location that could represent this sort of personal journey. I felt the emotional lift would be the best fit to help with this. Sam wanted to be as involved as he could and writing this with him was such a  joy. We really connected over this video and the process became that much better because of it.”

Sam Tompkins commented: “I think ‘(w)hole’ is sort of a realisation of knowing that not every problem in the world can be fixed by one person, says Sam. If there is meaning or  purpose to this life, it has to come from being and working alongside one another.”

22-year-old, Sam Tompkins started out busking on the streets of his local town, Brighton, and was signed to Island Records in 2019 after he caught their attention with his  independently released debut EP Coloured Emotions which garnered over half a million streams.