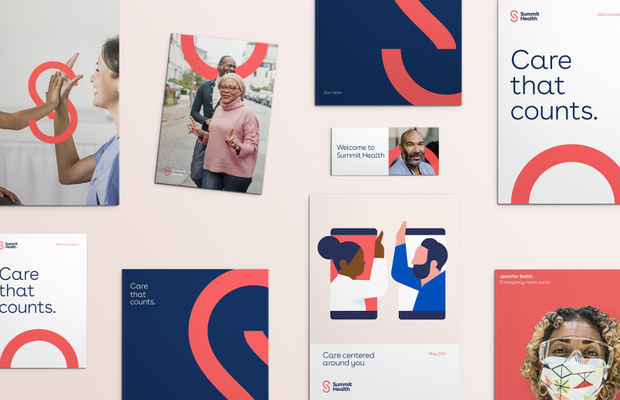 Summit Health, the new combined holding company for the Summit Medical Group and CityMD, is introducing its new brand and enterprise platform that positions the 8,000 person organisation as the healthcare company of the future, focused on delivering connected care throughout a patients journey. The strategy leverages the 100-years of expertise that has established Summit as an innovator in delivering the highest quality and most innovative health care experiences as it moves forward to setting new standards in the industry.

The comprehensive brand solution was built in partnership with Elmwood on the idea of connections: the human-to-human and solution-to-solution nature of Summit Health’s organisational ambitions. The approach reflects the values and focus of the combined organization to deliver health care that is more compassionate, considerate and human for its patients, employees and partners.

The creative idea behind the logo and identity system was to illustrate the seamless connection between the two partner organisations, their diverse set of services, their digital and physical interactions—and ultimately between the patient and provider. This new branding plays a vital role in elevating the patient experience and establishes a truly aligned internal organization.

At the heart of the branding is a fresh and modern logo that shows the top and bottom of the letter “s” as separate parts that come together – as in a hug - to form a larger “S.”

“Our creative idea behind the logo was to show a choreographed movement that demonstrates how the two organisations unite to create something new. The logo depicts how the new entity that is formed, is not just better, but is responsive and coordinated,” explained Meg Beckum, executive creative director at Elmwood. “Design is such an important element in healthcare where there is so much complexity and confusion. Through iconography, graphics, typography and colours we have created an empathetic brand that creates a more friendly experience.”

The two parts of the “s” are rounded, as is the typeface Buenos Aires. Beckum said the typeface was chosen for its modern look, which has a “whimsical softness to the letter forms and terminals,” providing a personality that feels welcoming. The tones of the coral color for the logo and blue for the type were selected for both the warmth and seriousness each color evokes.

The concept of connectedness is fully realised through Elmwood’s approach to the group’s various branded offerings, driving continuity of terminology and objectives across the once independent businesses. The holistic branding comes to life through a robust array of activations that extend through its new name, logo, branding identity, signage, and environments, to a brand film that brings the Summit Health story to life visually.

“This has been a difficult time for those on the front lines of the healthcare industry,” explained James Cockerille, executive strategy director at Elmwood. “We are all feeling disconnected because of COVID, but with the coming together of two powerful healthcare organizations, we saw an opportunity to strategically focus on "connection" (as a network and as human beings) and make it a strong differentiator for Summit.”

“The emergence of the Summit Health brand is about more than just a new name or logo. It brings unity and focus to our operations, while also delivering an enlightening, compassionate, and connected experience that is orchestrated around the patient,” said Matt Gove, Chief Marketing Officer, Summit Health. “The fresh, modern logo and brand identity evoke the feeling of connection on many meaningful levels.”

The new Summit Health name will replace Summit Medical Group, its patient-facing multispecialty brand, while CityMD will continue to operate under its existing brand with a line identifying it as “A Summit Health Company.” The new look and feel for the organization will roll out beginning mid-March and continue into the summer.  Additional communications include a new app, digital presences, an advertising campaign, animated digital communications as well as signage, graphics, original iconography and other elements, also created by Elmwood.

While the branding plays a vital role in the patient experience, another important element of the new Summit Brand was to build unity within the internal organization. Through the pillars of the brand’s values and mission the many brand elements were created to demonstrate commitment and appreciation to its 8,000 employees.

“With the leadership at Summit fully engaged in this project, the rebrand was developed in less than a year despite the disruptions brought on by the pandemic,” explained Meg Beckum. “In today’s environment, transformative brands need to move with the speed of the marketplace.”