Embody the Spirit of Good Times with This Dreamy, Pre Raphaelite Fashion Showcase 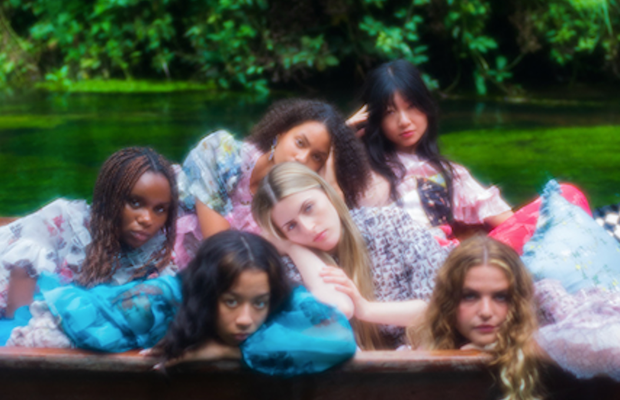 Since London Fashion Week is held virtually in this post-lockdown ‘new normal’, Preen by Thornton Bregazzi’s SS21 presentation comes in the form of a dreamy film showcasing the new collection whilst providing some much-needed escapism from the pandemic.

Titled ‘Stitch me back together with gold’ after the Preen by Thornton Bregazzi Spring Summer 2020 ready to wear collection, the film was shot on a heady summer day along the River Stour and Wetlands in Canterbury, England. The film, directed by Ben Cole and Modu Sesay and produced by Benji Landman, features a group of Pre-Raphaelite long-haired beauties punting along the river in Canterbury, dressed in Preen by Thornton Bregazzi’s signature romantic long dresses.

The film embodies the spirit of making good times out of tough times, medicine for the soul in our Covid era filled with boating, tree climbing, badminton and river walks. Spiritualized’s ‘A Perfect Miracle’ provides the soundtrack, completing the Ikigai of a magical, carefree day in our complicated era.

Executive producer and PRETTYBIRD UK co-founder Juliette Larthe said: “WE always use the inspiration and themes of the collection to inspire the catwalk shows and this is no different to making the film. We wanted to continue with the theme for the collection and translate this idea with the film, taking a broken time and stitching it together with the beauty we have in the world. I was inspired by another Japanese concept Ikigai, which means ‘a reason for being’, essentially that which makes one’s life worthwhile, and towards which an individual tales spontaneous and willing actions giving a sense of satisfaction and meaning to life. We wanted to create something positive and uplifting.“

Co-director Ben Cole said: 'Having the opportunity to contribute towards such an effortlessly warm collection was an honour, and I really wanted the accompanying film to ooze a similar warmth. Especially in such hostile times, it feels more important than ever to create and share love.'

Co-director Modu Sesay explained: “This film is an escape, it’s a reflective piece that requires you to pause instantly to consume it. The location and concept lends itself greatly to fantastical stories of a highly sought-after never-never land. This allowed us to place Preen by Thornton Bregazzi’s heavenly collection front and centre, flourishing in natural youthful exuberance. Ethereal was the word that immediately came to mind when I saw the pieces, and I thank Preen and PRETTYBIRD for allowing me to be a part of this gift to the world. Love always.”

As the world feels its way through the Covid-19 pandemic, and cultural events including fashion week have predominantly moved online, the Preen by Thornton Bregazzi designers worked closely with their long-term collaborator and friend Juliette Larthe, to translate the romanticism of their new collection onto film. Thornton & Bregazzi created the ‘Stitch me back together with gold’ collection whilst isolating at their Suffolk during lockdown, making it a family affair by involving their two young daughters in a creative alternative to home schooling. Utilising treasures unearthed during a lockdown clear out of their garage, Thornton and Bregazzi discovered boxes of hand-written letters and postcards, floral curtains and bits of pottery which belonged to the previous owner of their house – an American art critic.

Taking inspiration from Danish contemporary fine art ceramicist Bouke De Vries, and Juliette Larthe’s knowledge of an ancient Japanese concept of kintsugi - the idea of the scars making something more beautiful in the end – Thornton & Bregazzi combined these influences with the very real feeling that the world was breaking apart during the pandemic, and created a new collection based on nostalgia, memories, and the notion of metaphorically stitching things back together. The work of Bouke De Vries struck a particular chord, specifically his glass vase filled with broken china, captioned, 'In pieces, but holding it together.'

The collection’s organic, sustainable nature was borne out of the pandemic, and extended to the making of the clothes: “Nobody could buy new fabrics when the mills were shut, anyway. So everything was made only with fabrics we had left over from other seasons, and things we’d tried but never got around to using,” says Thornton. “The whole collection was made in the studio with just one pattern-cutter, a machinist, one member of staff, us, and the kids.”

When it came to shooting the film, Juliette Larthe creative directed Thornton and Bregazzi, finding a picturesque location in the Canterbury wetlands, and creating an idyllic vision of the collection worn by a group of young beauties and keeping it a family affair by casting Larthe’s daughter Poppy Pierce and her friends. The film was produced by PRETTYBIRD UK.

Soundtrack: 'A Perfect Miracle' by Spiritualized

Filmed on location on: the River Stour and Wetlands in Canterbury, England