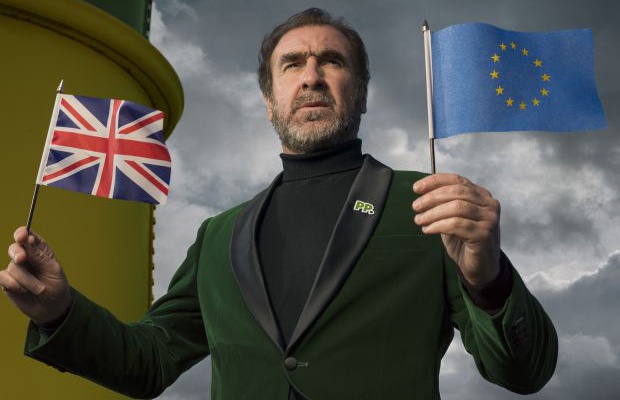 Legendary footballer Eric Cantona has weighed into the carnage around Brexit, as he offers Brits an escape from the incessant talk about the process.
As uncertainty and debate rages, Irish bookmaker Paddy Power has teamed up with Spanish creative agency Officer & Gentleman and released a campaign featuring one of football’s greatest European players, encouraging Britain to make an exit of their own – from Brexit. That’s because the brand has created a ‘Brexit Bunker’, somewhere between the UK and France, to escape from the chaos.
In the film unveiling the bunker, and the competition to stay there, Cantona recreates Theresa May’s infamous dance moves, mocks Brexit leaders Boris Johnson and Jacob Rees-Mogg, and references David Cameron’s love of pigs. He also shows how the facility comes stocked with supplies and rations – including tinned sardines (of course).
Paddy Power Brexit Ambassador Eric Cantona said: “Brexit is like Boris Johnson’s hair, he’s the only one who doesn’t think it’s a complete disaster. That’s why I have created the Brexit Bunker: A British Noah’s Ark! Here, one specially selected Brit can take shelter from the constant bombardment of Brexit chatter.”
Paul Mallon, Paddy Power’s head of major brand activations, says: “For a brand, meddling in Brexit is a minefield. We decided to focus on milestones, not moments, because if you tried to react every time there was a daft Brexit moment we’d be broken. So we wanted an audacious, bold and sharp-witted activation to land before the original Brexit Day, March 29 and said some prayers that it’d remain a giant clusterfuck until then. Our political friends didn’t disappoint.
“We briefed our EU buddies, the Officer & Gentleman agency in Madrid, for something different and once more they delivered with our Brexit Bunker stunt. Adding Eric Cantona to the mix, and working with the King, was a dream come true - he’s the hero Europe needs right now.”
For those not lucky enough to win a stay on the bunker, the brand created the Brexit Survival Guide: a series of instructional videos starring Cantona where he helps people navigate the dangers of a post-Brexit world:
Brexit Means Breakfast
Creating Your Own Energy
English for Foreign Footballers