eve sleep's Quirky Animated Spot Gets You Up with 'Le Coq' 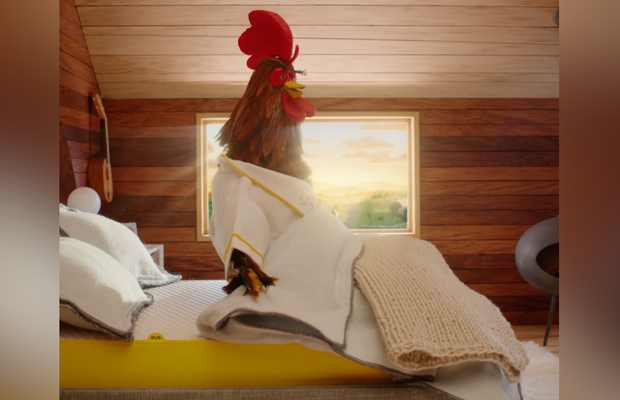 eve sleep, the sleep wellness brand that sells mattresses online and through retail partners, has launched a new advertising platform in France called ‘La Vie En Jaune’ (‘Life In Yellow’). To mark the launch the brand has created a new film, ‘Le Coq’, featuring a stop motion singing cockerel, encapsulating the feeling you get when you wake from having had a really great night’s sleep.

Created by adam&eveDDB, the new campaign marks a strategic shift for the sleep wellness brand.

The line will now be eve sleep’s end line across all communications in France.

In the hero commercial, directed by Peter Sluszka from New York-based Hornet Animations, a cockerel wakes up feeling so amazing that he breaks out into a dramatic yodel rather than the expected grating crow. The idea thus symbolises the energising and uplifting impact of a great night's sleep on an eve.

The new campaign comes after eve sleep’s strong performance over the past year. In 2020, the company’s revenue rose 6% to £25m driven by 18% growth in the second half of the 12 month period to December 31st 2020.

Airing in France from May 2nd, the new campaign is designed to further support eve sleep’s future growth across Europe.

Charles Digby-Smith, managing director France at eve sleep said “here at eve we've always done things a little differently. We know how amazing you feel after a great night's sleep, and our business and culture is built around helping as many customers as possible enjoy that feeling each and every day. That feeling, we've come to realise, is the feeling of living a life in yellow. And what better way to celebrate that than the launch of a yodelling cockerel?”

Paul Billingsley, managing director at adam&eveDDB, said: “eve sleep wants to redefine the mattress category in France. This new campaign establishes the brand as a business whose amazing sleep products don’t just help you sleep better – they help you see the world in a different light.

“Our brief was to bring to life the way you feel after sleeping on an eve sleep mattress. Our response articulates eve sleep’s mission to make the world a happier, healthier place through better sleep and brighter mornings by giving people the sleep they need to rise and shine.”