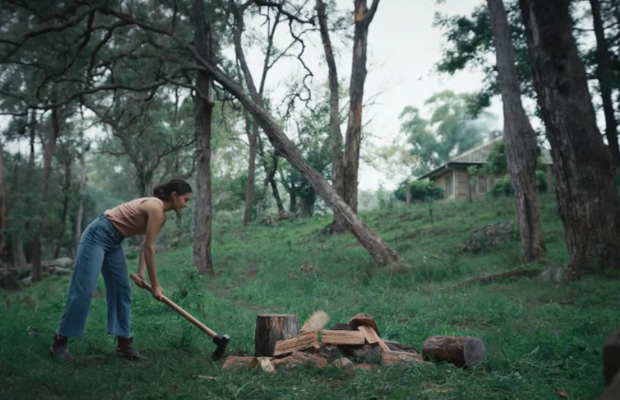 To mark International Women’s Day 2020, The Monkeys and UN Women Australia teamed up to create ‘When Will She Be Right’, a powerful film focusing on gender inequality in the country.The film, featuring actress and human rights law student Miah Madden, takes inspiration from the Aussie saying ‘she’ll be right’ to highlight UN Women Australia’s aim to accelerate women’s equality in 10 years instead of the predicted 99.5. Couple this with the recent march in Australia against sexual abuse and harassment of women in the country and you can see why the campaign has the potential to make a mark.
The Monkeys’ Lizzie Wood and Katie Kidd tell LBB’s Natasha Patel about the brief turnaround from the project, how they felt when the women protesting chanted ‘when will she be right’ and exactly why Miah Madden is depicted chopping wood as she delivers her powerful monologue.

LBB> What was the initial brief for this project?

Katie> It was a quick turnaround brief. UN Women Australia had been gifted some TV media space for International Women’s Day, so they asked us to produce a commercial that communicated how global gender equality is 100 years away, unless we take action. Due to time restraints, it was maybe expected that we just explain the issue using some existing footage. But the enormity of the 100-year time frame hit us hard and we saw it as a bigger opportunity. The team knew there was potential to create a bigger, more enduring campaign to draw attention to this issue.

LBB> How was it to be working with UN Women Australia for this? How much of an input did they have on creative scenes?

Katie> We dealt directly with Sunita Gloster and the UNWA board, who put a lot of trust in our team. Occasionally they came with questions, asking why we’d made specific decisions. When we gave our opinion, they took it on. But we had a lot of questions for them, too. Their expertise about the issues women face globally meant they wanted to communicate it perfectly. For example, we learnt using phrases like ‘domestic violence’ can excuse the behaviour, and doesn’t say what it really is – men’s violence against women. They told us not to beat around the bush with that one, and were happy to use harder hitting language because it’s the truth. Dream client!

LBB> There's so much happening with gender inequality across the globe so why was this narrative specifically chosen for the project?

Lizzie> It’s a topic we occasionally talk about, but mostly in isolation around specific incidents. When three women were murdered in quick succession in Melbourne in 2019, we talked about men’s violence against women, but the ‘monster’ narrative prevailed and we didn’t quite get down to how most rapes aren’t committed in dark alleyways by mentally disturbed men.
We talked about ex-Prime Minister Julia Gillard’s treatment in parliament, but not the wider portrayal of women in leadership and our acceptance of female ambition. It feels like we’re afraid to address sexism and gender inequality in Australia as the overarching problem that it is. Our collective attitude is to not stir the pot – don’t cause a fuss. Because if we do, we’re openly criticised for it. There is a lot of fear, a lot of lack of understanding and education on the topic, a feeling that it’s a women’s issue first – a lot of men fearing retribution from other men for speaking up.
But right now, we’re seeing a lot of issues arising at the same time. What’s happening in parliament with Brittany Higgins’ assault, the allegations against Christian Porter, other female staffers speaking out, Chanel Contos’ petition urging for consent to be taught in Sydney boys’ private schools, even the murder of Sarah Everard in London – together they are showing that these incidents don’t happen in a vacuum, they manifest from a culture that discriminates against and often dehumanises women. We’re all part of it. So now was the right time to criticise the Australian culture as a whole, that for too long has stood idly by not taking action to change it.

LBB> Why was casting Miah Madden right for the campaign?

Katie> We wanted to have a jab at old-Australian attitudes. So, our talent had to be the antithesis of older, white men who for too long have dictated the conversation. And ideally, we wanted women of colour in general to be front and centre – while these issues impact all women, the statistics are far worse for women of colour. Miah answered this brief perfectly. She’s a young, talented, Indigenous Australian actor, who outside of acting is studying human rights law at university. She cares a whole lot about the issues raised in the script. You can feel this in her performance. By the end of the shoot day, after hours of reeling off these horrific stats in the script, her performance was visceral. You can tell in the scenes where she’s sitting by the fire that the words are hitting her hard. 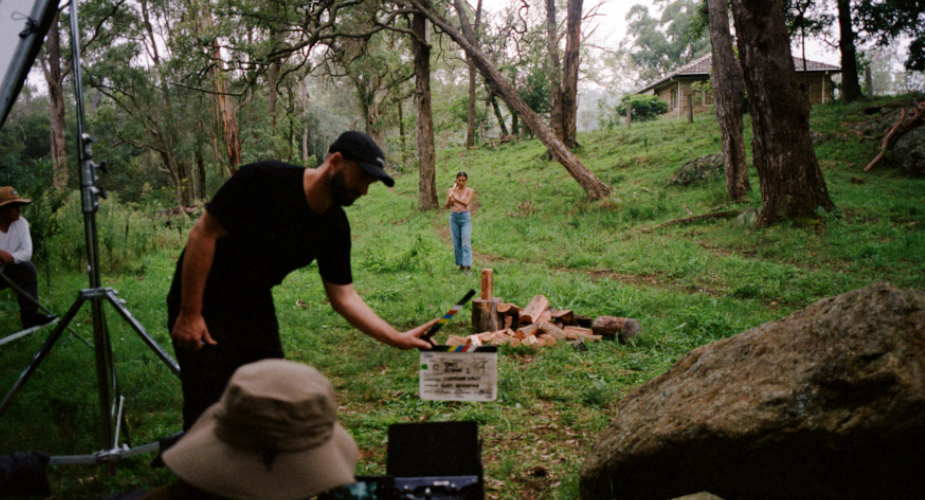 LBB> How did the motto 'When will she be right' come about?

Lizzie> Katie and I spent a lot of time talking about how people keep saying ‘it’s getting better’. But they said the same thing to our mothers, our grandmothers, and our great-grandmothers. When we found out when it really would be better, it suddenly seemed like it was barely getting better at all. Every horrible thing that had happened to us or our friends was going to keep happening, to someone else, again and again, for another 100 years. But Australians are so apathetic to it. We just think any old problem will sort itself out without doing much – and that attitude is exemplified in the expression “she’ll be right”. So, we asked, well, when?
Katie> ‘She’ll be right’ is a laconic Aussie phrase but it’s universally understood. It felt like subverting it by giving it a time demand and literally referencing women was a clever way to make the issue accessible to Australians from all walks of life. It was also a nice copy construct to be able to use ‘she’ to talk to the realities for women, ‘she is still paid less, she is still being assaulted’ etc. We’re lucky that The Monkeys is always pushing for provocative thinking, and is not afraid to critique an entire nation’s culture – which is probably why the team thought it was the strongest idea.

LBB> With the recent protests in Australia, the motto has been chanted by women as they march. How does this feel?

Katie> Pretty great. As advertising creatives, it’s the dream to produce work that makes culture, not just collateral. Seeing that the words we came up with in a room are now being chanted, written, illustrated and hash tagged by real people outside of our ad industry bubble is special. We’ve even had demands for the illustrations and words to be made into t-shirts, which we’re now in the process of creating to directly help raise funds for UN Women Australia to help fix the problem. Making work that people want to get around and engage with is certainly something to be proud of. 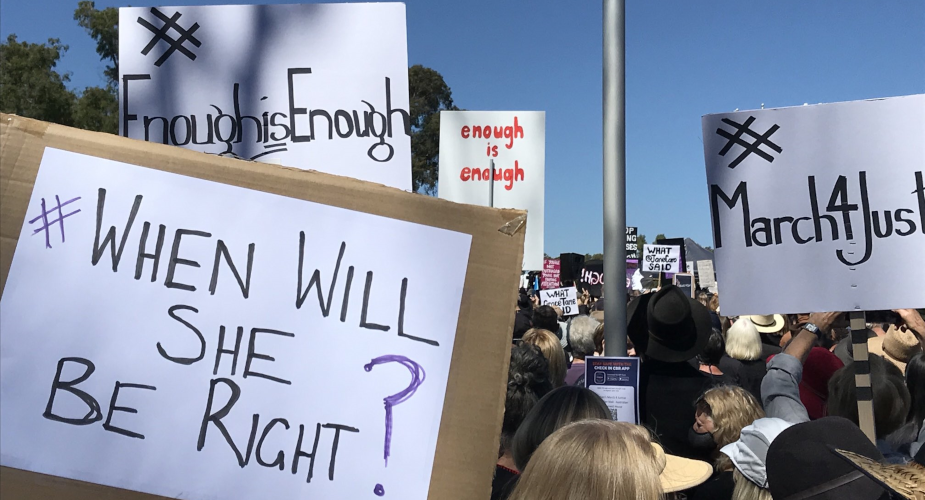 LBB> What made you pair Miah’s dialogue to the image of her chopping wood?

Lizzie> It was initially a practical decision. As a tongue in cheek criticism of old-Australian culture, we scripted our talent in the bush, doing something traditionally masculine, taking on a laid-back persona that we know all too well. We wanted it to be primarily a monologue, keeping the words powerful and front and centre. But you need to hold the audience’s attention through all that somehow. When we spoke to our amazing director, Madeline Kelly, she suggested the talent could be building a fire, with axe chops helping to accentuate each piece of dialogue. It was just symbolic enough of anger and trouble and unrest to be powerful, but not enough for people to create obscure metaphors out of – or so we thought. Some interpretations online are much funnier.

LBB> What were the biggest challenges with this project?

Katie> Time and budget. We had to make considered, often big decisions very quickly due to time. It was a rush, but we feel it actually made the project better in the end. We didn’t have time to overthink anything. We turned this around in less than four weeks from brief to dispatch, with next to no money. As it’s an issue close to many people’s hearts, we got to collaborate with a number of extraordinarily talented people who wanted to help just because they cared. Every single one brought something new and valuable to the table. Madeline Kelly, our director, brought new dimensions to the film that made it what it is. The illustrators we worked with were more than happy to give us their time, and their input helped us develop a visual language for the whole campaign. It takes a village – and this job really proved that. 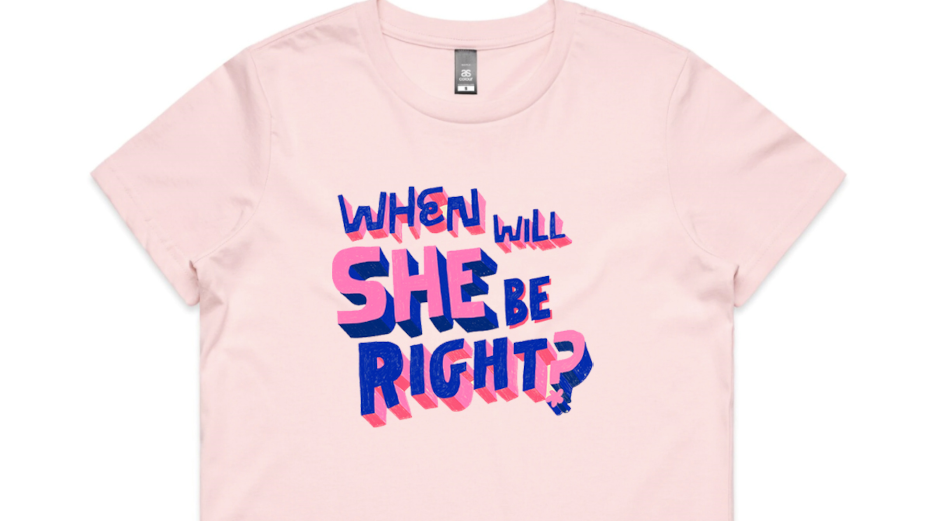 LBB> From the chants at the marches you can see how this project has already impacted society, but what do you hope it achieves?

Lizzie> We hope it helps to hold a mirror up to ourselves as Aussies and question how we do things here. As we’ve used a phrase so popular in the Australian vernacular, we hope every time it’s uttered it’s a little reminder of where girls and women are. This ad won’t do it alone, but as part of the current conversation, we hope more people openly recognise that there’s a big problem, are more empowered to speak about it, and most importantly to actively change it. Equality benefits everyone, and Australia is in a better place than most to get there if we lose the complacency.