Cut+Run editor on his creative process and how strong editing can feel seamless and almost invisible... until it’s not 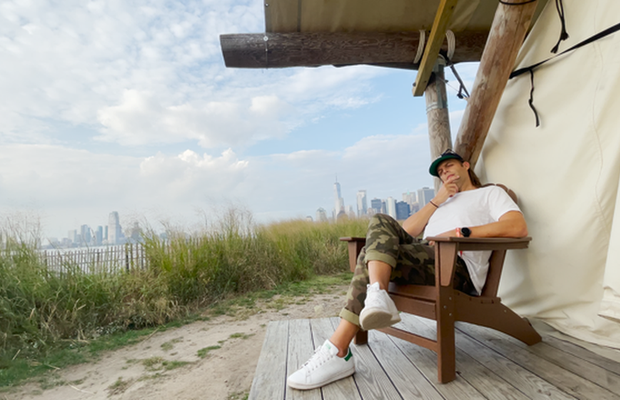 Ethan Mitchell is known for editing visually stunning work across a variety of genres including montage, storytelling, documentary, and star-studded brand supported narratives. His editing always serves the story in a way that feels effortless and his curiosity and talent are reflected in each of his projects.

Mitchell has earned a reputation for his visually playful and striking campaigns for Google, Apple, Kate Spade, Mercedes Benz and Adidas with agency partners 72andSunny, Droga5, Translation, and McGarry Bowen. He enjoys collaborating with directors Matthew Frost, Marielle Heller, and The Fines.

Most recently, Ethan was shortlisted for an AICP Post editing award for his work with Matthew Frost on Christian Cowan’s “A Fashion Thing” for his spring/summer 2021 collection in partnership with the Loveland Foundation. Mitchell also edited the series “If I’m Alive Next Week” which premiered at the 2021 TriBeCa Film Festival.

Ethan> I always start by working to understand the tone of the project. As I’m screening the footage, I’m usually listening to music that matches the mood. I try to capture the general vibe in my mind as I work through it. I start throwing things together in the timeline, just making little buckets that work nicely together. I know I’m ready to edit when I’m feeling really familiar with the footage and I get the urge to start assembling.

Ethan> Really strong editing can feel seamless, almost invisible... until it’s not. Finding that balance is such a challenge, so I’m always searching for moments or even a series of shots that can anchor a scene. It can be as simple as the right look at the right time or it can be painstakingly building a whole sequence out. It has to have a point of view or generally it’s going to fall flat. I think the best decisions come from not overthinking it. For me, many times the initial shot selection and structure feels the most natural.

Ethan> It’s hugely important. In longer form projects especially I always work to have the audience buy in early on. If that doesn’t come together, it can be hard to have people stick around. When well executed, those first moments evolve into a framework for the larger story. If you develop a cohesive rhythm with your storytelling and get the audience used to the world you’re creating, I find the story begins to form on its own.

Ethan> I find the rhythm of a scene to be most important when it comes to editing dialogue. To come alive, it has to have that feeling of a real conversation. I edited a short for director Matthew Frost earlier this year called 'A Fashion Thing'. The piece opens with a dialogue-driven scene with comedians Chloe Fineman and Bowen Yang but quickly morphs into a pseudo music video. The track drove the piece but the dialogue up front had a rhythm of its own that set the stage. This piece encompasses both sides of what I think of as musicality: dialogue and the music itself.

Ethan> I recently edited several episodes of a series called 'If I’m Alive Next Week' for directors Robbie Sublett and Jenny Morris that premiered at the Tribeca Film Festival earlier this year. It of course had your basic logistical challenges of remote editing during the pandemic. But something new for me was getting to build out the episodes so they could live both as standalone pieces as well as one coherent episode.  In the commercial world we are usually creating one-off bursts of content, generally designed for a particular time, place and product. This needed to live on its own and also make sense as part of a whole, almost in a modular way. It forced me to work on a story structure that was cohesive but easy to jump right into wherever you picked up the series.

Ethan> 100% without a question it’s more challenging to not have enough. In those situations, you always want more, sometimes just one more shot! And generally if there isn’t enough you find yourself working so hard to bridge those gaps. I’ve experienced some miracle projects that are thin on footage but are very forgiving and just come together.

Ethan> I think that just as content is evolving, the deliverables we’re being asked to create are evolving as well.  We’re still creating traditional :30s and :60s but I am also seeing a lot of longer form content as well as so many more shorter social asset requests. Before it almost felt like the social pieces were an afterthought and now in some cases social is becoming the priority.  More time and creativity are being put into short form socials during live edit sessions and it’s definitely changed how I think about the editing process.