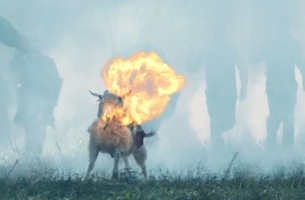 “The Fire King” saga follows Kevin’s quest for the throne in the land of 12 realms. Battles and courtship ensue before he and his human sidekick, James, oust the sitting King Aragor with a fate-sealing blow: “Your dragon is no goat,” James quips. The voiceover concludes: “Be the king of your castle. Win $100,000 300 times a day playing Keno!”

Artifact has collaborated with BBDO Atlanta on the Georgia Lottery campaign for the past several years. Among the previous five spots, Kevin has been seen flying a fighter jet, and duelling with evil villains in a spy drama.

“The VFX have always been crucial to making Kevin’s fire-breathing a reality since it’s what usually gets him and James out of trouble, or saves the day,” says Ryan Tuttle, Artifact Creative Director. “Rather than rely on 3D simulation to create the fire, we partnered with the production company’s pyro team and created the effect practically. This approach has given us by far the most believable results ever since we began working on this campaign.”

The opening scene required extensive matte painted landscapes, as well as painstaking crowd duplication for the army. Perhaps the biggest challenge that Artifact overcame was the project’s ambitiously fast turnaround of less than two weeks.

“‘The Fire King’ is a prime example of the blockbuster-quality VFX and finishing services we offer,” concludes Tuttle. “It also exemplifies our ability to work flawlessly with agencies and their creative partners. As always, BBDO involved us during pre-production. By opening the lines of communication early on and having us on set with the director and the DP, we were able to achieve the best creative assets possible with efficiency.”