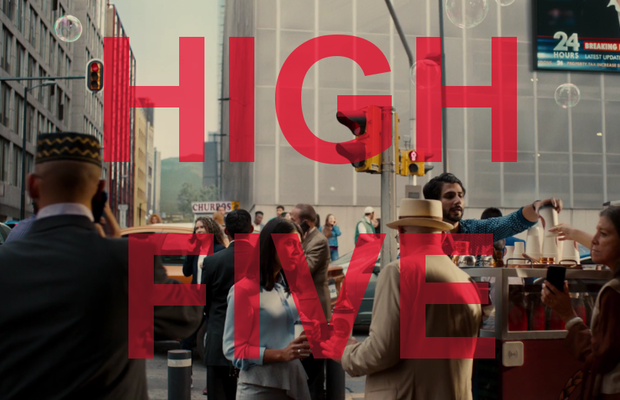 Our purpose is to empower creativity and we can't think of a better place to do it than in Mexico. A country with great cultural richness due to its complexity, contrasts and incredible locations to set up any story. All the pieces presented here tell different messages, however they have something in common: people, places and culture. From the tequila fields to the vast universe of Mexico City and the millions of possibilities it offers, Mexico is undoubtedly the best place to tell any story and we are eager to demonstrate it through our valued collaborator’s work.

Wanting to capture that sleek first sip feeling in this latest spot for Maestro Dobel, director Emma Westenberg, alongside The Lift producer Helena Medina and executive producers Carmen Valdivia, Jackelyn Calleiro and Gabriel Stavenhagen, leaned into the mechanics of magical realism and the technicalities of tequila production. “It was really interesting and fun to learn about the tequila making process while we were prepping for the shoot,” Emma recalled. “Even though our spot is set in a magic realist world, it helped us tell the narrative about tequila. Jalisco was also so beautiful and colourful, such a wonderful place to shoot.” The spot capitalised on the natural beauty of the region, capturing the sweeping landscape of the agave fields as 'jimadores' slice away the plant’s spiky leaves in perfect unison.

In the latest campaign from Lululemon, the activewear brand set out to push the boundaries of visual storytelling. Seeking a variety of locations, director Daniel Wolfe, under his new banner Love Song Films, alongside our friends at Droga5, came to Mexico City knowing that The Lift could bring their every idea to life. 'Feel', which was produced by The Lift’s Fuad Abed, follows the story of a young man who leaves isolation to rejoin the world. From shooting in a lonely apartment to a dense forest, the urban streets of Mexico City to even underwater, the shoot required quite a range of striking locations. With such a diverse landscape right at our fingertips, we had a lot of creative freedom to build the various atmospheres within this spot.

Imagine that you have the superpower to instantly transport to your spot of choice and watch your favourite TV series. Well, that is exactly what Caviar director Cloé Bailly represented in her latest eye-catching work for Hulu. We've all been there - new episodes of our favourite series premieres and suddenly there is an urge to get in front of the TV screen. Cloé used subtle humour and a general tone of the absurd to emphasise this feeling. "You need to constantly be aware of the juxtaposition between the spectacularly large gags and the small details. It’s a yin/yang situation - surrealism lands most powerfully when you lay the bonker balls stuff on top of everyday mundanity. This applies to everything from the casting choices to the performances, to the practical and digitally enhanced FX, and the styling, art direction, cinematography, editing, and music." With Mexico City as Cloé’s playground and The Lift’s production services, this project used a superb casting, appealing VFX and talented direction to bring to life a spot which conveys a charismatic and cartoonish portray of our everyday world.

In a fast-paced world immersed in a disposable culture, we often see adult singles as outcasts of our society. Dating site Match believes that experience, confidence and emotional maturity are quite the opposite of this. Their newest campaign was created by Mojo Supermarket, produced by Somesuch and directed by Vincent Haycock, and speaks to those who know themselves, who they want, what they need. In the words of Match's CMO Ayesha Gilarde: “We’re saying goodbye to the casual daters, the don’t know what they want-ers, and everything in between to celebrate singles who are confident, emotionally mature, and self-aware in their search for love.” Mexico City served as the perfect romantic setting to praise the most attractive daters out there: adult singles - an often overlooked segment in the dating industry. The Lift's production services helped this production to not only portray but to share real love throughout the entire filming of the spot.

We at The Lift are believers in the power of dreaming big, so we were thrilled to work on this spot for Accenture which shared that message. "What I loved about this commercial," starts Paola Gómez from Yanga Casting "is the change in emotions. How the talents and the actors had to quickly change from one emotion to the other, happy to sad, angry to surprised. And we see this with the bubble. They see the bubble and immediately their life changes, their hearts are illuminated." We could not be happier with the way it turned out.