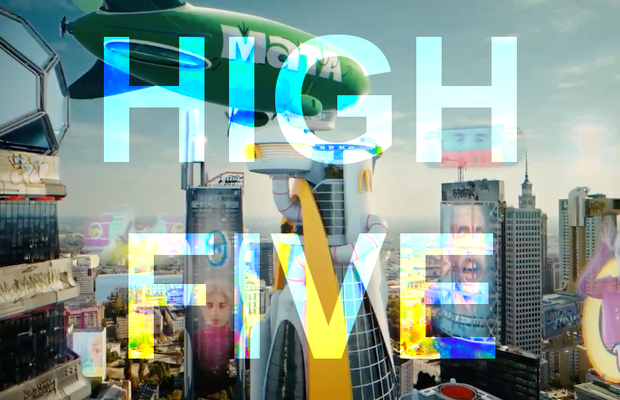 'Real' has been the most important element of any track, communication or production I have had the luck to work on. If something couldn’t be produced properly - and by ‘properly’, I mean in an authentic way - I would always opt for an alternative, a creative substitute. I love it when it’s real and I don’t love it when it’s banal. I’m skeptical when things are only a subject of taste. Some things are just simply - like the ads I have chosen - raw, honest and authentic. They depict how people in Poland are: rebellious, sensitive, brave. We call it the Slavic soul / sensibility. I hope you’ll see it too by checking them out. The works don’t have subtitles, but I promise I’ll do my best to describe what kind of gems you can find in them if you look (and listen) carefully...

Agency: 2012 Agency
Production: Film Produkcja
Post: Human Ark
Translation:
"When we are born, we think we can do everything. But soon we are told that we can’t fly. Some explain it with biology. The others have threatened us that something can happen to us. Maybe because of that we want it so much. When we grow up, we see that some succeed. We cheer them up. But there a few, who are jealous in secret. Do you think it is bad? No, they are the next ones. Remember, it’s because somebody has told us we can’t fly. This is how it is - tell the poles that something is impossible, and the next day you will see them doing it. Vivo – spread your wings."
They say people cannot fly, but then you watch Polish ski jumpers and give the benefit of the doubt. They’re carried by the power of will...and probably also by the great track that accompanies this ad. There’s this sweet hybrid of orchestral and electronic music that conveys both energy and elegance. The tempo and the space is pure perfection. To me, it’s the scale of the production and how music works with the motion picture that allows this feeling of richness and closure at the same time.

Agency: JUST
Translation:
"Every minute, 20 tonnes of plastic goes into the seas and oceans. You can support the #lessplastic initiative and gain even 500 zlotych extra by choosing an account with a debit card from eko material, that decomposes faster to never get to oceans and seas. Agricole - less plastic on your account."
I think that one of the best ways to reuse dumped plastic is for art. One would normally think of recycling or using it for opal but another idea is to come up with a cool composition, invite an amazing singer and arrange the track on sounds made from plastic. What else can you ask for?

Agency: 2012 Agency
Production: Opus Film
Post: RIOdePost
Męskie Granie Orkiestra is a concert tour initiated by Żywiec Brewery, organised each year in the summer with major Polish artists in Polish cities and the town Żywiec. The aim of the tour is to present the creative side of Polish music scene and to encourage the audience to experiment with music - jazz musicians playing with rappers, for example. The video presents the teaser of the Concert Tour, and the leading song promoting the project. It is the change that often makes me wonder where my next step will land. And if I change my Dr Martens shoes to comfy Air Max, I might see myself switching from rock to chilled pop music. You might even find me in the outskirts of the dance floor from time to time. With Męskie Granie being a very rock-based musical event, I was surprised to hear a change in the aesthetics this year. They probably have a slightly different target - younger urban cats, maybe? Who said beer is for rock alpha males only!?

McDonald’s - 'How MATA Took Over MAKA'

Agency: DDB Warsaw
Production: Papaya Films
Translation:
"Guys, one day mac will be mine." "You are not talking seriously?" "...and here it is" *MATA took over MAC* "Check his meal on McDonald's application..."
On the change note again - back in the days, it would take years for a rapper to sign with a brand, if ever. Especially in hip-hop: true hip-hop heads would never want to see their artist (rapper) has signed with a brand, as they would lose their credibility. Today, an emerging artist can sell out concerts the size of a stadium and sign a deal with the biggest burger producer, and fans will be 'lovin’ it'. #foodforthought

Agency: 180heartbeats + Jung v. Matt
Production: F25
Music: MassiveMusic Warsaw
Still reading? I’m happy you made it home safely. This one is not about another jewellery brand selling shiny rings for you to pile them up on your boudoir night table. This one is about 'I will get a ring if I want to', 'I will get a necklace because I wish to', 'I will get these earrings because this is none of your business'. This one is about badass women, YES! women who don’t need anyone's permission but their own. With her powerful voice, Bizet’s singer Carmen encourages women of all kinds, ages, shapes and colours to take what they want and own it.