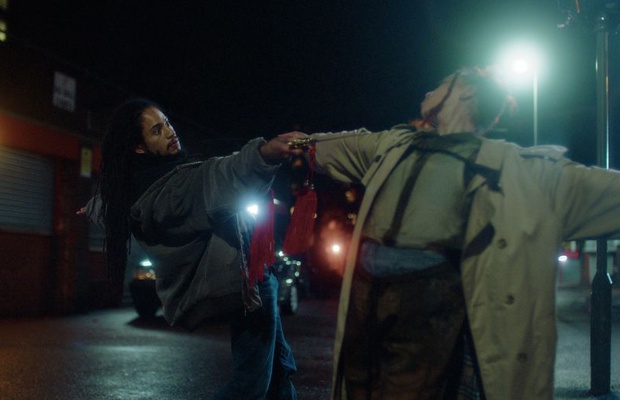 Two people with a history of creating generally quite incredible music videos are Hiro Murai and FKA twigs. Hiro is the director behind, among many, many other brilliant things, Childish Gambino's This Is America promo, one of the most pertinent pieces of filmmaking in recent memory. Meanwhile, FKA twigs does things like spend an entire year training her body to learn pole-dancing for the music video for her song Cellophane, which was brilliantly directed by Andrew Thomas Huang and won a heap of awards.
So, we had reason for excitement then, when this collaboration from the pair landed in our inboxes late one Friday afternoon a couple of weeks back. The film, for a tune called 'Sad Day' begins in a beautifully unassuming late-night cafe on the outskirts of London. FKA twigs and an unidentified man begin to sword fight - a nod to twigs' sword Lilith - breaking out of the café and into the streets. The film is based on the sensual movements of Wushu martial arts, which is used to depict the complex relationship between the two characters, but against the backdrop of an intensely real setting.
LBB's Addison Capper was lucky enough to pick the brains of Hiro to find out how he, twigs and the rest of the crew pulled it off.
LBB> What type of place was the concept at when you first got involved in this? Did FKA Twigs have some kind of vision already?
Hiro> twigs knew from the start that she wanted to do a Wushu piece between her and a male opponent. I’d seen a few videos floating around on the internet of her performing live with a Wushu sword, and when she reached out I got really excited about the idea of trying to tell a story with just Wushu choreography. We sort of approached it as an experiment to see how much story we can communicate just through movement.
It also felt like a unique opportunity because who else can do this other than twigs? No other artist would dedicate the time and discipline required to hone such a specific craft. It felt like someone offering me keys to a Lamborghini.
LBB> Our detective work suggests that you shot somewhere near Barnet in London. That cafe is amazing! What was it about the location that caught your eye?
Hiro> Finding locations was tough for this project because of all the logistical challenges that came with doing wirework stunts at night. It’s one of those things you write into a treatment because you’re excited about the idea, but then you just get pummelled to the ground with logistic obstacles once you start prepping for it.
When we did finally find the New Oceans Bar, Larkin Seiple (our DOP) and I fell in love with it because it was so unassuming and strange. It felt like the kind of place where you would see a drunk couple arguing late at night after leaving a bar. John Stevenson, our production designer, did a great job fleshing out what was special about the space without it feeling too designed.
LBB> There's a really beautiful hue about the whole piece - what were your main aims and inspirations when it came to the colour grade and overall aesthetic?
Hiro> Larkin, Ricky Gausis (our colourist at MPC) and I have done a lot of stuff that hovers between mundane and fantastical, but we usually do it in a pretty dry, matter-of-fact way. This one felt like we were nudging the dial towards something a little more sensual or misty. We pulled some cues from Wong Kar Wai movies, because nobody else does that better, and tried mixing it in with our approach.
LBB> It's part fight, part dance. How did you work with FKA twigs on the choreography?
Hiro> It was a pretty intuitive process. She has a really great team of choreographer and movement coaches, so we all sat in the rehearsal space for a few days and talked out / acted out ideas. It had to come together really fast like all music videos, but that part was particularly fun.
LBB> From a practical point of view, how did you achieve the Matrix style jumps?
Hiro> Very slowly. Again, that’s one of those things that was exciting to talk about as an idea and extremely difficult to execute. We had a great team of stunts and riggers who designed all of the wirework. For every effortless jump you see in the video, there are about 10 people jumping and tugging on ropes to make that happen.
LBB>And with regards to the way they moved through the air, where did you look for inspiration? Were there any particular films that inspired you?
Hiro> Crouching Tiger, Hidden Dragon is an obvious one. But I think the intent was to try to take the language and physics of all those Wushu movies and see how they feel in a real life setting.
A breakdown sequence courtesy of MPC
LBB> When twigs is cut in two, it's not at all gory really. What was your thought process to how that scene should unfold and look?
Hiro> A lot of the “story” came naturally from the way the song was structured. The ending of the song goes from a bombastic chorus to this soft and vulnerable vocal. It just felt like a natural progression of events, as weird as that sounds.
We owe a huge thanks to MPC LA for their work on what we called the ‘innards’. We knew we wanted it to be sort of ethereal and otherworldly, not bloody, but it still needed to feel like ‘flesh’. We started the conversation referencing organic things like coral and flower petals, but they really ran with the concept and created something special.