Hold the Rest of the Campaign: Tecovas Boots Sold Out Before All Ads Had Run 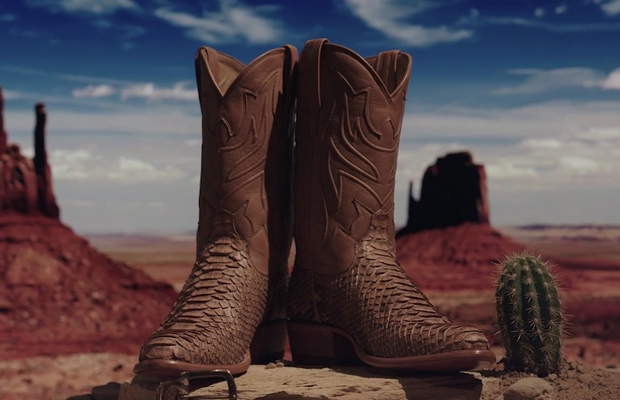 Greatest Common Factory’s latest campaign for Tecovas – video and social ads promoting a limited-edition python cowboy boot – sold out inventory by 9am on the launch date. This marks the second time the agency has sold out a limited edition within 24 hours. In this case, the shelves were empty before some of the ads could run.
“Pythons are cause for commotion,” said John Trahar, leader of Greatest Common Factory. “Not everyone can handle them. We showed the boots with a little edge to issue a subliminal challenge to the right consumers who can pull them off.”
One video played on the quick sellout last time. Against a close-up of a rugged guy anguishing with his head on a woman’s shoulder, copy spells out, 'This year, avoid two horrible words – sold out' one word at a time. Then we see a pair of boots on a rock against the backdrop of a desert scape, with the copy, 'Python is back.'
Mobile and social posts showed a black screen where lightning flashes make a boot visible, the anguish video, and traditional product portraits with the headings 'step into some mischief' and 'your spirit animal is back.' Another video, 'Say Howdy to Rowdy', which opens with a dirt track racer doing donuts in the sand, had to be pulled because the inventory had already sold out.
With Austin, TX, in lockdown, GCF had to improvise production. Trahar found inspiration in 'The Making of the Mandalorian', the film that Disney shot in a giant studio with video footage playing in the background. GCF created its own lower-tech version using an 80-inch monitor, stock imagery and flashlights to mimic the flare of sunlight.
“Everything about this python release was a triumph,” said Brian Jordan, executive creative director at Tecovas. “It demonstrates the following you can generate with a clear, meaningful brand; the power of a resonant message at the right time; and the ingenuity of creative people to recreate the art of advertising.”