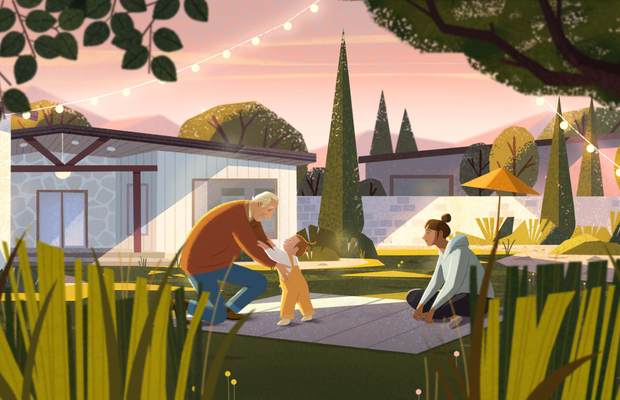 When it comes to protecting what matters most, we could learn a thing or two from the animal kingdom. That’s the idea behind this latest campaign from Mutual of Omaha called “Protect Your Kingdom”.

In the spots, Hornet director Natalie Labarre pulls out all the stops: the sweet beckoning call of nostalgia, a splendidly cinematic design aesthetic with whip-smart misdirects of attention, and an improbable depth of story given the tight time-frame.

In short, Natalie has tapped into her very own vast kingdom of talents to deliver the “Protect Your Kingdom” message in wildly effective fashion.

But let’s back up a second. Who here remembers the show “Wild Kingdom”? For the millennials in the back row, “Mutual of Omaha’s Wild Kingdom” was a touchstone of American TV from 1963 through 1988, essentially the original "Planet Earth." Every Sunday, millions of Americans would tune it to watch the pioneer program of the nature adventure genre.

The goal of Mutual of Omaha’s current campaign was to harken back to the heritage of that show; to hone in on the nostalgia for the generation of customers who'd grown up watching it; and to explore the contrast of wild and domestic spaces in order to communicate the message that everyone has a personal kingdom worth protecting.

How Natalie and Hornet’s team of artists pulled it off was multi-fold. First, the stories within each spot flourish in their magical misdirection. For each vignette, there's a transitional element that carries over into both worlds—the panther becomes the housecat, the waterfall becomes tap water gushing from the sink, the tall grasses of the Savanna become the tall grasses of a domestic backyard.

Propelling these transitional devices forward is a design aesthetic both beautiful and purposeful. The backgrounds were inspired by the graphic style of old-school National Park posters, yet they're pumped full of rich colors, painterly textures, and dramatic lighting & camera blurs to add more depth of field.

The characters meanwhile are so much more than just a lineup of characters. Each has their own unique story. Whether it's the dad who spills food on his shirt during the dinner scene or the ensuing snickers shared between the grandfather & grandson, these micro-moments are what make the families feel like real families and what fill the spots with such an appealing cinematic thrust.

In Natalie’s words: “I was immediately drawn to the challenge of creating a parallel between wild nature and our intimate home life—not only for the potential beauty in design that the subject matter called for but also for the chance to give relatable, intimate family moments the epic treatment they deserve. I also loved the idea of blurring the line between imagination and reality.”

It’s this effortless blur of imagination and reality that establishes the analogy between the wild kingdom and the personal kingdom and what imbues the scenes with all the wonder and warmth of, say, the Serengeti at golden hour. It’s also what brings the spots roaring to life.