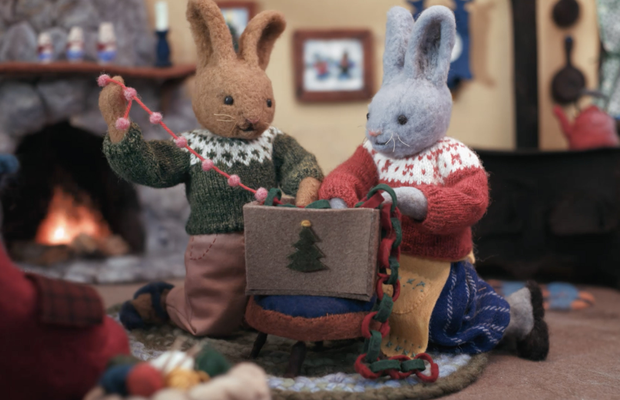 For Emmy-nominated singer-songwriter Ingrid Michaelson, the holiday season can never come soon enough. “Anyone who knows me knows that I start celebrating Christmas in September and I cherish this time of the year so very much," she says.

That’s why this year, Michaelson is celebrating the release of a deluxe version of her 2018 album 'Songs For The Season' with five new tracks—including an original duet alongside her friend and choral comrade Zooey Deschanel titled 'Merry Christmas, Happy New Year'.

To accompany the song, Michaelson wanted to create a festive stop motion music video that would bring the warm and fuzzy lyrics to life. And… well - there’s not much fuzzier than felt.

That’s where Hornet director Andrea Love came in. Specialising in stop motion with needle felted wool, Andrea is an animator and director whose following has reached viral proportions thanks to her award-winning film Tulip and her utterly addictive Instagram videos.

In fact, Zooey Deschanel was already familiar with Andrea’s work via social media. And it was she who recommended Andrea to Michaelson as a director for the music video. According to Michaelson: "For this video, I told Zooey I wanted an old-fashioned stop animation video like Rudolph. She showed me Andrea Love’s work and I was smitten. We reached out to Andrea and she was on board instantly! It all just fell into place in such a lovely, natural way. I love all of it so much."

From there, Andrea got to work. She enlisted the help of Tulip co-creator Phoebe Wall to co-direct and create the character illustrations & set designs. Andrea and Phoebe then came up with the concept themselves - a sweet and simple love story about two woodland creatures, Bunny and Rabbit, as they search for the perfect Christmas tree.

According to Andrea: “My goal was to make it the cutest, coziest, warmest video ever. It’s supposed to be a little over the top, but almost in a ‘I can’t stop watching this and I need more’ kind of way.”

Created over the course of three months in Andrea’s own home studio, the music video is a love letter to all things merry and bright: crackling fireplaces, ornate ornaments, cozy sweaters, woodland friends and loved ones gathered around a Christmas tree… the only thing missing is a partridge and a pear tree.

In terms of process and craft, the film is a shining example of the magic that happens when Andrea's woolly fiber aesthetic is paired with Phoebe's whimsical folksy designs. For Andrea, there were also a number of new challenges peppered throughout the project.

“I had never done felted-snow before. So figuring out how to make it different shades and colors rather than one blob of white, and figuring out the lighting so as not to overexpose it—that was a fun and challenging learning experience.”

Another fun challenge was experimenting with the rigidity of various interior-set objects. How do you use something as inherently soft and flexible as felt, for instance, to create something sturdy and rigid, like ladders, furniture, and clock-hands? This is just one of the many nuanced design decisions Andrea considers when constructing an entire world out of fiber.