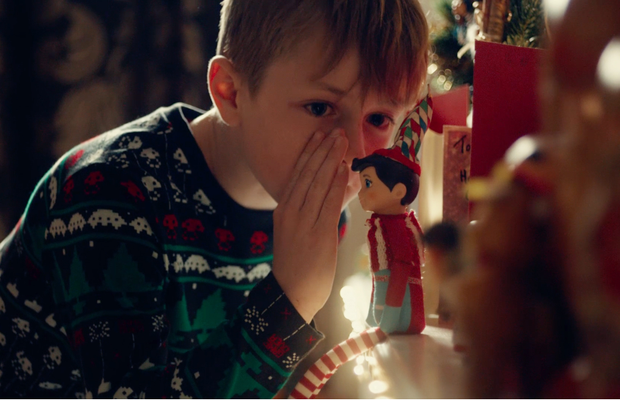 There’s a simplicity about the SuperValu Christmas commercial that makes it easy to love. A warm story about anticipation and togetherness in a year where many around the world are unsure what Christmas will look like hits harder than it might have done in other years. In fact, the spot has received attention all over Ireland’s media and even a considerable amount elsewhere.
To find out what thoughts and decisions went into telling this festive tale with a twist, LBB’s Alex Reeves caught up with TBWA\Dublin copywriter Martin Corcoran, senior art director Paul Arthurs and business director Yvonne Caplice.

LBB> When you first started thinking about SuperValu for Christmas 2020, when was that and what was the strategic/creative starting point?

Martin> We got started on the Christmas 2020 campaign back in July. Initially we explored lots of different approaches, but felt SuperValu as a brand had earned the right to create an emotive campaign after all of their work helping communities throughout the pandemic. Research with SuperValu's customers found that people were desperately looking forward to Christmas this year, but that they also worried about how health restrictions might impact this year’s festivities.

LBB> How did that develop into the initial idea?

Martin> We knew this would be a Christmas like no other. And for us, that meant telling a story through the Covid lens and really capturing the experience we've all shared over the past ten months. We looked at what people typically expect from a Christmas story, and how we could use these elements to deliver a surprise that was both heart-warming and timely. That got us thinking about Christmases when we were kids ourselves, and how the sense of anticipation and giddiness might be different in 2020.

LBB> When it came to start thinking about production, what were your biggest considerations? And how did those play out?

Yvonne> Our biggest consideration at the time was the impending lockdown. In early pre-production stages the country was at Level 3+ restrictions and shoots were permitted. There were rumours that the government would announce Level 5 restrictions a week before our shoot and at that point it was unclear whether or not we would need to postpone or cancel our plans.
Thankfully, commercial production was listed as an essential service, so our shoot was allowed to go ahead, albeit a little differently to normal. Our creative team were on location, with the rest of the agency team and client team attending via Zoom and everyone staying in touch through WhatsApp.
The other big consideration was around having our boy and Grandad hugging. Should they? Should they not? In reality, this is advised against in our current restrictions, for social distancing reasons. However, we made a call to show the hug in the ad, because really this is the Christmas we’re all working towards, this is the aspiration, this is what everyone wants, to hug their loved ones.

LBB> Which elements were most tricky to get right?

Yvonne> We were really privileged to work with an amazing director Sam Huntley, experienced production crew in H2 Films and a stunning cast - and for a remote shoot, things went surprisingly smooth. There were no real tricky situations on the day. And equally importantly, we had a client who was really bought into this idea from day one and worked with us all the way to ensure we ended up with the best possible edit and a really powerful ending.

LBB> Are there any moments or scenes in the film that you're particularly happy with the way they turned out?

Paul> I think the way the film captures the boy's perspective is why it works so well. Those intimate moments really allow viewers to experience both his worry and excitement. From his deep concentration in writing the letter to making a wish before bedtime, we all go on this journey with him and can share in his delight at the big reveal.

LBB> How has the response been now it's out? Has anything surprised you?

Paul> Seeing the reaction has just been incredible. We were quietly confident the film would go down well, but the response both here in Ireland and abroad has been a joy to watch unfold. We’ve seen articles pop up in places like France and New Zealand, so to tell a story that strikes a chord for so many people has been a real high point for us.
Yvonne> The response has been phenomenal. We were humbled by the early reactions from our clients, our colleagues, family and friends, but then it just took off. People were sharing crying-selfies on social and there’s been lots of crying emojis! Our client, the cast and the creative team have been interviewed on all the big radio stations and newspapers in Ireland and as Paul mentioned, we’ve even popped up on the other side of the world - which was a big surprise.

This Irish Ad Has Gone Viral with Its Emotional Christmas Message