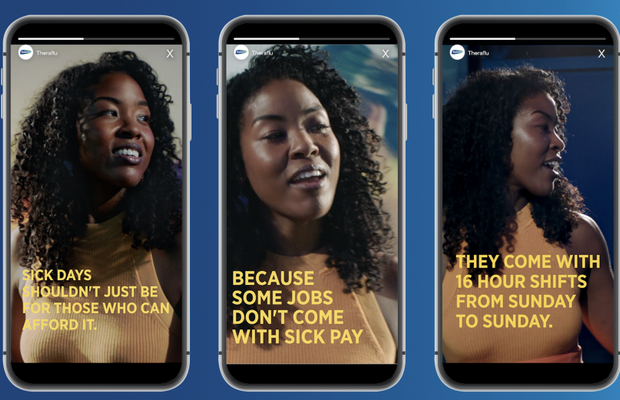 Over-the-counter US medicine brand Theraflu recently launched a $150,000 microgrant programme in partnership with non-profit Good+ Foundation. Its aim is to help cover lost wages from 1,000 unpaid sick days this cold and flu season. Created by Wunderman Thompson, the Rest & Recover Fund will provide relief for those facing access barriers to sick time and raise awareness of the cultural stigma associated with taking a sick day.
To illustrate sick time inequities, Wunderman Thompson created a short film featuring an Emmy Award-winning poet and activist, who wrote and performed a poem entitled Some Heroes, which serves as an ode to hardworking Americans everywhere who struggle with access to rest.
The campaign launches an ongoing purpose driven effort by Theraflu to help create a flu safe world for all Americans. This can never happen if all Americans can't recoup and recover from the flu. LBB's Addison Capper chatted with Wunderman Thompson North America VP, executive creative director Cass Zawadowski to find out more.

LBB> Can you give us some background as to why this campaign is even necessary? What is the sick pay situation in America?

Cass> While access to paid sick leave has expanded dramatically in the past decade, most of the people who can take advantage of this benefit are working full-time, at a single employer. But today more and more people are working too few hours at one job to qualify for paid sick leave. Instead, they are working 20-30 hours split among two or three jobs. Their working hours often total far more than full-time, but since it’s not in one employer, they do not qualify for basic benefits. So, they either work or they don’t get paid and don’t have the privilege to take time to rest and recover.

LBB> Regardless of access to sick pay, what stigmas around taking sick leave do you feel exist in America (and beyond)? Do you feel they've been exacerbated by Covid and the shift to more and more people working at home?

Cass> When people do have access to sick pay, workplace culture can still sometimes deter them from using it. Theraflu research found that 47% of Black people in the US say that they don’t utilise sick leave because they are afraid of being fired. Another barrier is managers often make employees jump through hoops before granting sick leave. Requiring a doctor’s note can be an unrealistic burden if it takes several days to see your doctor. Or a person could spend all day in urgent care or the emergency room, not getting the rest that they need to recover, while simultaneously being burdened with a substantial medical bill.
Inadequate staffing can also lead to resentment by coworkers when a person calls out sick, because the rest of the team feels as if they have to pick up the slack. This can create pressure from all sides.
The research also surveyed people lucky enough to work from home. They revealed that unless they felt extremely unwell, they didn’t feel the freedom to be able to unplug and take a sick day. Covid requires people to be on all the time and rest simply isn’t an option.

LBB> What are the foundations of this campaign? Was there a brief?

Cass> The campaign aims to establish Theraflu as a champion for rest and recovery. Our ambition as this campaign evolves is that we ask a wider audience, other corporations and brands, for help in the fight for rest and recovery.
In respect to a brief, it was quite unconventional, which was refreshing. The cold and flu category typically revolves around products and symptoms – stuffy nose, headache, aches and pains, etc. With this brief, we knew we had the opportunity to remain at brand level and to create something that would have the power to drive mass behavior change and create impact for people’s lives.

LBB> During the research process, were there any particularly surprising or shocking discoveries?

Cass> Most shocking to us was the data… you can’t dismiss it. Only 24% of all US workers have access to sick pay. Black and Latina women are especially affected here, with 60% of Latina mothers and 81% of Black mothers being restricted from rest and recovery.

LBB> What was the ideation process like from there? Where did the spoken word / poetry idea come from?

Cass> We spent a few weeks ideating as an inter-agency team - Wunderman Thompson (creative), Edelman (PR), Uniworld (multicultural), pGSK (media), Arc (Shopper). We surfaced a few concepts with the client, each showing the breadth of the creative idea across channels, as well as earned media potential. Amongst that mix was the ‘Right to Recover’ idea. The idea has authenticity at the heart of it, and everyone loved the idea of a partnership with a spoken-word artist. We thought it would be a compelling and pointed way to deliver the campaign message.

LBB> What was the writing of the poem like? Quite collaborative with the spoken-word artist or more about letting them do their thing?

Cass> The original poem was composed by one of our team members. We gave our client an idea about the premise of the poem and the emotion we were hoping to capture. We also used this poem to brief our spoken word artist, who then created her own inspiring and beautiful version of the poem.
The casting process was one of my most favourite to date. We looked at an incredible range of spoken word artists from across the US. Many tears and goosebumps were present during the casting sessions and call-backs. Ultimately, we partnered with an inspiring and accomplished Emmy Award winning poet, writer and activist who penned an original spoken word poem reflective of her lived experiences as a Black and Korean woman. ‘Some Heroes’ celebrates the strength and tenacity of those Americans forced to power through work days while sick and calls for societal change. Because sick days shouldn’t just be for those who can afford it. Our poet’s performance is central to the campaign – appearing as a long form 90-second video, as well as 30-, 15-, and 10-second cut downs for online video and social.

LBB> There's more to this campaign than selling medicine. Why is that the right approach for Theraflu?

Cass> Theraflu’s brand mission is rooted in fighting for a flu safe world. But really this is impossible if people continue to show up to work sick. In addition, we’re on a mission with GSK to make healthcare more accessible to everyone. So, a purpose driven campaign just made sense.  We embraced the opportunity to take on bigger societal challenges here to make sick days a right, not a privilege.

LBB> What is the launch strategy for the campaign? Who are you aiming to reach and what are you hoping to achieve?

Cass> This is a digital-only campaign, and we used social to drive both awareness of the issue and of the fund. There’s a hero film, two online videos and a range of social assets, with all executions driving to the website to learn more. Further, this campaign launches an ongoing purpose driven effort by Theraflu to help create a flu safe world for all Americans. At the core, this means helping to ensure more Americans can access the rest and recovery time they need to get better and prevent the spread of cold and flu. Beyond US workers, we’re hoping to inspire other corporations to join the movement and support the fund, as well as lobby for changes in the government that would see sick pay officially become a right for all.

Cass> This work was the result of a great agency and client partnership. Lots of honest communication and trust. Honestly, we’re very proud of this work. Taking a stand for something, being a voice for underrepresented communities all while trying to impact culture is the ultimate ambition with any project. Thank you, LBB, for being an advocate of the work and for our chance to give a deeper look behind the campaign.