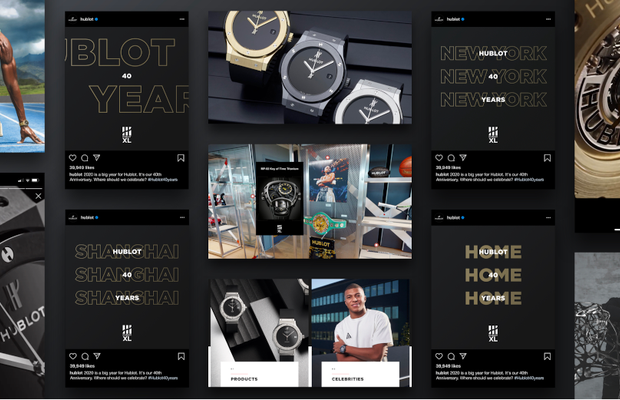 Founded in 1980, Hublot will be celebrating its 40th birthday this year. We take this opportunity to look back at the explosive journey and dizzying ascent of a small Swiss watch brand with disruptive designs which, in less than half a century, has become a genuinely cutting-edge watchmaking manufacture recognised all over the world.
As the first brand to dare to combine gold and rubber on a watch, Hublot has turned this audacious approach into a philosophy forming the cornerstone of all of its creations, innovations and partnerships: the Art of Fusion.
“The revolutionary concept of the Art of Fusion has forged Hublot’s success throughout its journey, and has led it to be first, unique, and different. Its most powerful expression - the iconic Big Bang in 2005 - defined Hublot’s identity and became the driving force behind its manufacture and its research and development department. Today, this best-seller continues to inspire the brand to reinvent itself and look to the future. This principle is part of Hublot’s genetics, and a success story that is only just beginning.”
Ricardo Guadalupe, CEO Hublot, said: "Fusing past and present into a futuristic watch. Fusing historic materials with high-tech compounds. Fusing traditional watchmaking know-how with advanced technologies. Fusing classic mechanisms with all-new constructions. Fusing the best of each celebrity with the spirit of the brand. Each of Hublot’s actions comes from the Art of Fusion founding concept. 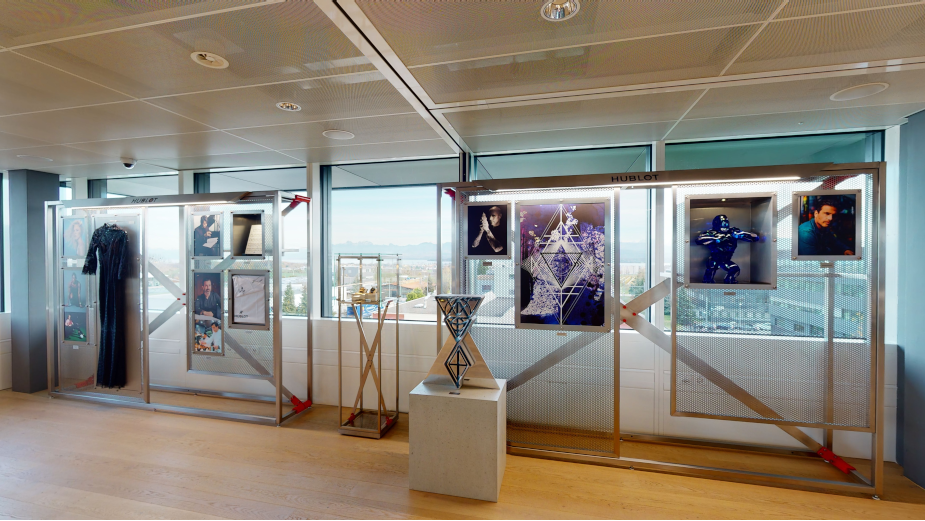 Iconic Watches
Through their performance and their disruptive character, the products that have marked Hublot’s history are unrivalled. Innovative and different. It all began in 1980 with the Classic Original, combining a precious material - gold - and a modern material - rubber - for the first time in watchmaking. In its wake, the iconic Big Bang Original caused a real impact in terms of watchmaking design in 2005, with its black composite insert, giving the impression that it was entirely crossed by the black rubber strap, and its 'sandwich construction' which enabled the materials to be played with. One year after the phenomenal success of this watch, Hublot created the Big Bang All Black and the revolutionary 'invisible visibility of time' concept. Entirely black, this piece with a powerful identity went even further in its combination of all-new materials with an extreme design. The Big Bang All Black had a powerful monochrome style, which is widely used in contemporary watchmaking. The flagship model was subsequently introduced in an even more virile and sporty version, with the King Power, and then transposed in a barrel shape with the Spirit of Big Bang.
The best-seller also incorporated the first Hublot 'house' engine - the famous UNICO chronograph - thus becoming emblematic of the brand’s manufacturing development. From the sapphire of its case, to the innovative movements it incorporated, and its multitude of gentle and joyous feminine variations, the Big Bang become an inexhaustible source of creativity and innovation. Equally emblematic of the Hublot style, in a timeless sporty-chic register, the Classic Fusion launched in 2008 also reinterpreted the first innovative designs of the 1980s. Integrating a great variety of features, diameters, materials and vibrant colours, it too became an essential unisex model.
Since 2004, Hublot’s growth has been truly dizzying. This success led the global luxury leader LVMH to buy the brand in 2008. To meet this rapid development and vertically increase its production, Hublot inaugurated two buildings in Nyon, the first in 2009 and the second in 2015. The high-tech manufacture hosts a rich array of professions, crafts and technologies capable of conceiving watchmaking according to the 'Art of Fusion'. At the same time, Hublot took up residence in the greatest luxury metropolises, New York, Geneva, Tokyo, Zermatt, Paris, London, Dubai and Hong Kong; its boutiques, with their modern design, translate this same simultaneously urban, luxurious and technological spirit.
Art and Materials
Written into Hublot’s DNA, materials are essential attributes of the watches, for their aesthetic qualities and their resistance to scratches and ageing. Since its first use combined with a gold case, in 1980, rubber has been the defining essential and emblematic material of the brand. Likewise, Magic Gold, developed in partnership with EPFL (the Swiss Federal Institute of Technology in Lausanne) and produced in Hublot’s foundry, remains the only scratch-resistant 18-carat gold alloy and the hardest in the world. The Manufacture’s metallurgists also developed a colour of red gold, King Gold, which has a warmer hue than traditional red gold. In the field of ceramics, for 15 years now, Hublot has been exploring the exceptional properties of this anti-allergic, inalterable and stainless material, and is developing brand-new bright colours - scarlet red, royal blue. As for sapphire, today the brand is the only one to master its complex industrialisation and to develop new colours for it - black, yellow, blue, pink - in its laboratories. 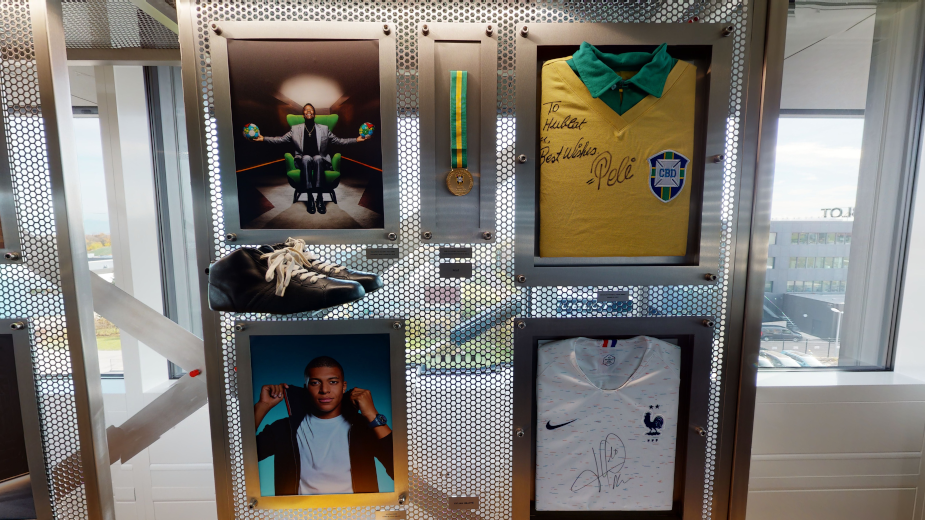 In Movement
The Art of Fusion also expresses itself in the creation of innovative and unique movements. From the simplest to the most sophisticated, they fuse functionality, originality and design. Introduced in 2010, the UNICO calibre is the first mechanical chronograph movement entirely designed, developed and manufactured by Hublot. It was characterised by its atypical architecture, with the double clutch mechanism and column wheel visible from the dial side.
This was followed by the MECA-10 calibre, which presented a skeleton reminiscent of a 'Meccano' building set and a long 10-day power reserve. In the register of traditional complications, in 2012, Hublot presented a tourbillon with a five-day power reserve, then combined it with a minute repeater with a double cathedral chime, before redesigning it in a barrel shape.
This department is also responsible for the 'Masterpieces' which are produced in very limited series and obey no codes. Such as the MP-02 Key of Time, telling the time according to our desires; the MP-05 'LaFerrari', incorporating 637 components, a tourbillon and a 50-day power reserve; the MP-07, the transposition of an engine block into a distinguished watch; or the Big Bang MP-11, and its series of seven barrels, giving a 14-day power reserve. To these remarkable models, we can add high jewellery creations that are as dazzling as they are ultra-specialised, such as the Big Bang Tourbillon High Jewellery, entirely set with 1,574 baguette-cut diamonds (~ 84.9 carats).
Making History
From the Italian entrepreneur Carlo Crocco, the founder of Hublot in 1980, to Ricardo Guadalupe, the motor behind Hublot’s expansion since 2004 and its CEO since 2012, and to Jean-Claude Biver, its chairman since 2004, who was the instigator of the Big Bang and the Art of Fusion, these visionary and audacious figures have all forged the success of the brand. At their side, living legends of sport, such as Usain Bolt - the fastest man in the world - King Pelé, the youngest player to ever win a FIFA World Cup in 1958 and the only triple world champion with the Brazilian team; and Kylian Mbappé, world champion at the age of 19 and double French champion, are Hublot ambassadors and share its philosophy: to be unique, first and different. Other partnerships in art and music, like the legendary group Depeche Mode, the virtuoso pianist Lang Lang, the contemporary sculptor Richard Orlinski, the tattoo-artist Maxime Plescia-Büchi (Sang Bleu) or the Italian entrepreneur Lapo Elkann (Italia Independent) have given life to exceptional creations.
In their own way, each of these figures contributes what they do best to Hublot. And contributes to making it the reference that it has become in 40 years.
Worlds of Passion
In addition to its watches, Hublot shapes its identity and tells its story through the worlds that it brings together. In 2006, it was the first luxury watchmaking brand to enter the footballing world, with the Swiss national team. Conscious of the huge potential of this popular sport, Hublot took to the pitches by partnering with UEFA and FIFA, becoming involved with major events and prestigious clubs (Chelsea, Manchester United, Juventus, Ajax, Paris Saint-Germain and Bayern Munich), and forming close relationships with footballing stars (Pelé, Maradona, Mbappé). In a stroke of genius, it transformed the fourth official panel into the Hublot emblem. And it sums up this partnership with a powerful slogan: 'Hublot Loves Football'. Just as intense and involved, the relationship between Hublot and Ferrari, initiated in 2011, goes well beyond dedicated watch collections or F1 visibility: each year, hundreds of events bring the two partners together in a 360° agreement that celebrates innovation and the quest for performance. In the field of sport, Hublot is also present on golf greens, basketball courts and boxing rings, and includes the greatest champions and renowned athletes among its ambassadors.
These sports people personify talent, audacity and accomplishment, values that are dear to Hublot.