Inside the Jury Zoom 2021: Immortal Awards’ LATAM Jury Sends Through First Projects of the Year to Global Round 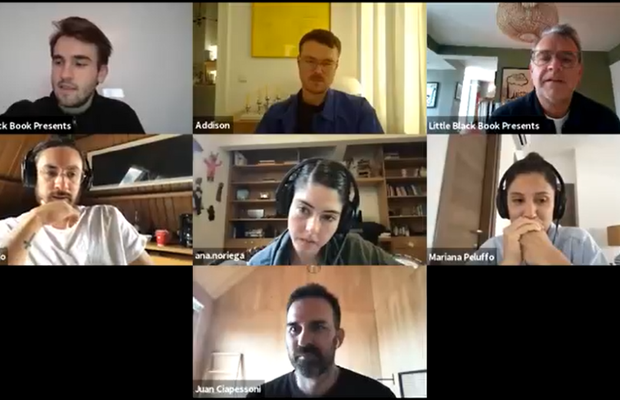 Tuesday saw the first pieces of work to be elevated to the final, global round of judging for the Immortal Awards as the Latin America jury, hosted in partnership with global partners Nice Shoes, landed on seven projects to put through. 44 entries were initially whittled down to a shortlist of 15 via online judging before the jurors convened virtually to decide on which pieces of regional work would go forward to battle on the global stage. Each and every one of the final seven is worthy of its place.
The judges representing Latin America were: Mariana Peluffo, regional executive creative director for Central America at Cheil; Juan David Pardo, executive creative director at MullenLowe SSP3; Ana Noriega, chief creative officer at FCB Mexico; Juan Ciapessoni, co-founder and head of innovation at Electric Factory; Sergio Gordilho, co-president and chief creative officer at Africa; Diego Medvedocky, president and chief creative officer at Grey Latin America; and Mariana Sá, chief creative officer at WMcCann.
“Amazing work!” said Juan from Electric Factory after the judging session. “Most of them are very specific from our region and I'm so proud of them. I believe Latin American creativity and force has an amazing opportunity to lead many of the upcoming global problems to solve. Sustainability, empathy, emerging markets economy, life science, health and green energy are just some of the areas where a region like ours has all the right to act and speak about.”
“They are incredible pieces that show a high level of empathy and knowledge to achieve purposeful creativity,” added Ana.
As Juan says, many of the projects that made it through to global judging have world-bettering properties, but it was also refreshing to see a number of proper consumer brands on the list of Finalists. One of the standout pieces was from Wunderman Thompson Buenos Aires and Unilever deodorant brand Degree (known in other markets at Rexona and Sure). Their adaptive deodorant bottle is built for people with visual impairment and upper limb disabilities.
“It seems to me that Degree's inclusive bottle is very strong since it shows us, through something as simple as a deodorant, a non-inclusive world,” said Ana.
“Degree's Inclusive is an excellent product innovation and a perfect example of a process to go from insight to shelves,” added Juan. “It feels good when you see innovative ideas that end up in the hands of the mass and with a big company behind them. This means courage, decisions and speed to execute.”
There are other projects on the list of Finalists with an aim to make the world a better place but backed by the power of a big brand. ‘She Football Club’, from ABInBev brand Pony Malta and MullenLowe SSP3, received high praise for its hacking of the video game FIFA to include women in a particular game mode. The vote on Brazilian sports TV network SporTV and agency Africa’s brutal but excellent spot ‘Let Her Run’ was also pretty unanimous.
What’s more, Chevrolet’s ‘Lost Roads’, by McCann Colombia, proved to be a favourite of much of the jury. The campaign included a Discovery Channel documentary that travelled through Caquetá, a Colombian territory that was in the midst of violence and which is one of the most biodiverse and least explored in the country. Ex-guerrilla fighters were also trained as tour guides to show people the region in person. “For me, it shows exactly how collaboration through creativity can make a better world for everybody,” said Juan. “Government, brands and community. How an idea can make the canvas bigger to explore while creating jobs, rebuilding a purpose, growing the economy, and creating empathy between us. The future should be about efficiency and being more human through the use of technology as a tool to enable action. This idea shows also how governments and corporations can benefit the community through ideas and execution.”
“I really liked the way to transform something with a negative charge to something positive,” added Ana. “It is not just another social responsibility campaign where a brand or an organisation helps a vulnerable group, it is a win-win, since in this specific case, the people who know the territory best were taken advantage of and given an opportunity.”
The full list of Finalists are: Andea ‘Awa’; Chevrolet ‘Lost Roads’; Folha de S.Paulo ‘The Most Valuable News; Johnnie Walker ‘The Re-entry’; Pony Malta ‘She Football Club’; SporTV ‘Let Her Run’; Unilever/Rexona ‘Degree Inclusive’. Check them all out here.
The final round of global judging of the Immortal Awards is set to take place on Thursday 18 November.