Incisive, careful debate and discussion makes this year’s final round of judging the toughest yet, writes LBB’s Laura Swinton 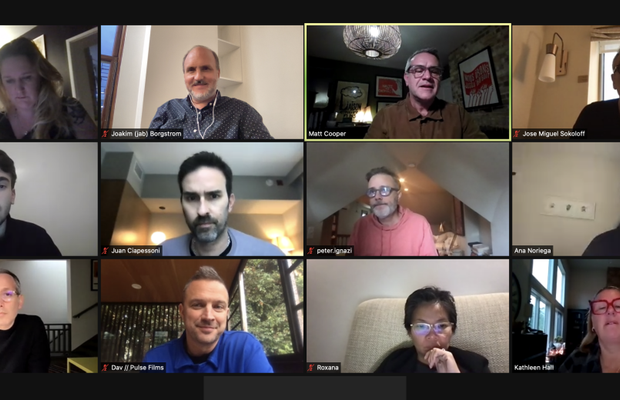 Of all the judging sessions in this year’s Immortal Awards, the global finals had the tightest, highest calibre work. From 1192 entries, only 31 made it through multiple rounds of prejudging, as well as local and regional judging. But the tightest shortlist made for the toughest - and longest - jury debate.
With jury members joining in from all over the world, from the USA and Uruguay to Dubai and New Zealand, there were some who were in for a very late night (or perhaps a very early morning!), and so it was triply impressive to see the thought, care, incisiveness and good humour they brought to the judging. I’d love to express my personal gratitude to everyone who helped us whittle down this year’s Immortal Awards - for the final session that was Ana Noriega (FCB Mexico), Ari Halper (R/GA), Carol Lambert (Publicis Dublin), Damon Stapleton (The Monkeys), Davud Karbassioun (Pulse Films), Joakim 'Jab' Borgström (BBH), Jose Miguel Sokoloff (MullenLowe Group), Juan Ciapessoni (Electric Factory) Kathleen Hall (Microsoft), Peter Ignazi (Cossette), Tahaab Rais (FP7 McCann) and Valerie Madon (VMLY&R APAC).
Having been present for every final round for the Immortal Awards since the show launched in 2018, I was struck by how distinct this year’s selection was, reflective perhaps of a highly unusual year. After the first viewing of the reel, something happened that had never really happened before - the jury was notably split, with several pieces scoring the same number of high votes and low votes.
What that meant was that the jury conversations dug deep. What does it mean for a piece of work to be ‘Immortal’? Where did a great idea that exists as a prototype or open-source blueprint really sit when compared to ideas that ran at scale? How can we compare a TV ad with a news cycle-dominating PR idea or a hack that literally saved businesses? And what, oh what, do we make of that Duck Sauce video?
In the end, and after forensic discussion, the jury settled on four Immortal winners. As the toughest award to win in the whole of advertising, the jury is under no obligation to give out any trophy at all if they feel that no work meets their standard for ‘immortality’ - but in a strange quirk or jury room dynamics, previous years’ juries have also given out four trophies. Six pieces of work also earned a commendation, a hard win and well-deserved honour that celebrates the very best work of the year that came within a hair’s breadth of immortality and which combined impact and creativity. And the 21 finalists too managed to make it through at least two rounds of judging and comfortably find themselves in the top 2% of entries.
We’ll be sharing the winners and bringing the industry together with screenings throughout 2022 - kicking off with a show in London’s Ham Yard Hotel on January 12th. We hope to see you there!
For a full rundown of the awarded work click here.
The Immortal Awards  international showcase tour will be returning in 2022, kicking off on Wednesday 12th January at the Ham Yard Hotel, London, in partnership with Concord Music Publishing. The evening is an exclusive opportunity to see some incredible international work and network with the leading names in London’s advertising, production, and post scene. There are a limited number of tickets available, priced at £150 (+VAT) each. To buy, please contact Paul Monan; paulm@lbbonline.com