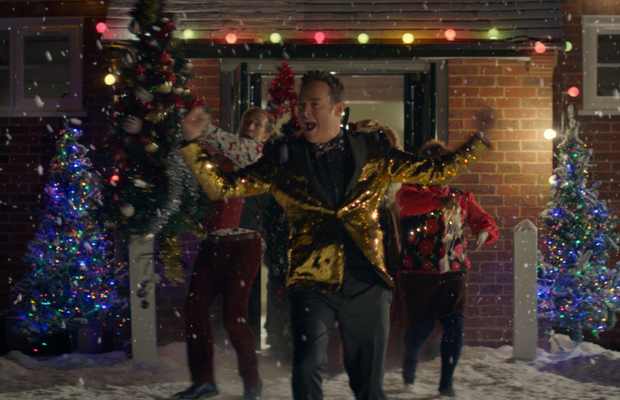 As we all know, this year has been filled with seemingly never-ending changes and restrictions. Easter was ruined, holiday plans were cancelled and the summer was without love, which is why ITV is taking a stand with a positive, defiant, and rallying cry to bring the nation together and make something of Christmas.
This year, instead of the 12 days of Christmas, ITV introduces its new and improved Christmas schedule which will be jam-packed with great entertainment and all the trimmings, for the whole month of December. The broadcaster will spread entertainment, drama, joy, and excitement across ITV and the ITV Hub with one of their ‘strongest Christmas schedules to date’.
The campaign launched on 27th November 2020 with a 60” specially shot brand ad, moving away from the traditional sentimental Christmas ads and instead celebrating everything ‘brilliantly bonkers’ around this time.
Enlisting the expertise of comedy writer and director, Stephen Pipe, the ad opens on a snowy army barracks. The resident Sergeant Santa bursts into the room with a rallying cry for Christmas lovers, telling them that “Britain is in danger of having a half-baked, can’t be bothered Christmas”. His recruits are a motley crew of festive fanatics who he reminds shouldn't feel spurned for their nine-hour Christmas playlists, their beard baubles or their ‘hilarious’ xmas jokes - ‘they were funny then and they’re funny now!’. After an inspirational speech, the sergeant’s trusty sidekick ITV presenter, comedian, magician and actor Stephen Mulhern is told it's his job to ensure the UK is so full of Christmas TV they won’t be able to move from their sofas. He sends them charging into the night with a final rally, “So, let’s get out there and do it for Christmas”.
The TVC was shot during the second national lockdown in the UK, following strict safety and production guidelines and working with internal and external Covid supervisors. Clever steps were taken by the production team in order to have people close to each other on set, including casting couples who could safely stand within 2m of each other. The shoot took place in Woking, where a full army barracks were recreated and made to appear as in the depths of snowy winter.
The ad will air on all ITV channels throughout December.
Paul Ridsdale, director of marketing, ITV, said: “Whilst we know that Christmas is going to be different this year, we still believe it can be special and so we wanted a campaign which would act as a rallying cry for everyone to make the most of it. To ensure we're doing our bit, we'll not only have a packed festive schedule on ITV, there'll also be more content than ever before available via ITV Hub. So whether you want to sit down with the rest of your bubble - or escape them - there's no excuse not to 'Do it for Christmas'.
“Every Christmas, there are those who are a bit much." commented Tony Pipes, ECD, ITV Creative. "Too much jumpers, too much jolly, too much jingle. Well, this year, we really need Christmas and there is no such thing as too much. This film celebrates those who are drunk on Christmas spirit and lets the world know that ITV is on their side and doing it for Christmas too.”
Stephen Pipe, director, Tantrum TV, added: “What Britain needs now more than ever is a dose of the Great British sense of humour in all its self-effacing awkwardness. This was a great opportunity to make a comedic Christmas call to arms. A chance to celebrate the overachieving Christmas crusaders who are ready to save our Christmas no matter what. In such challenging times a ‘full credit’ has to go to everyone involved in a project like this. From commissioning - to creative - to creation - it’s a collaborative process where every moving part relies on the other. It's a true testament to talent and technicians to produce entertaining idents so successfully and so safely.”

52 Artists Came Together for These ITV Idents