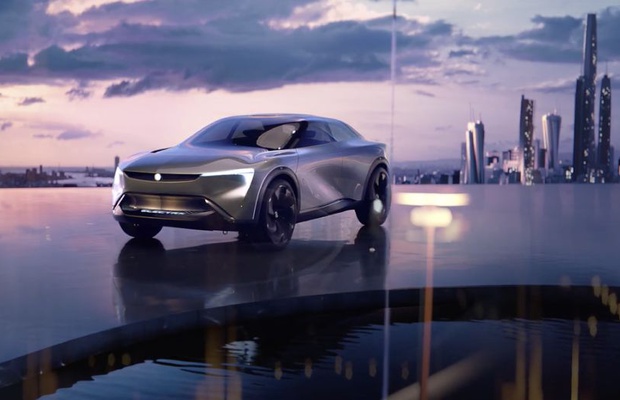 ​The SAIC holding company hopes to allow car owners to experience a 150-second futuristic virtual journey through a fantasy world that will finally converge in reality. They are based in China, but Juice were not yet in China at the time of production. Hence it was clear we had to find a replacement for the traditional workflow that included several SFX supervisors working alongside the production team on set, marking and mapping objects in real-time, and adjusting as the production progresses.

The question was – how to make a CG car commercial that relies on remote in the later stage?

1. In a series of dream sequences, the main character is fantasising about her perfect car while floating between different CG worlds. To seamlessly integrate the footage with CG environments the team had to give extra attention to lighting and reflections. It’s a challenging job even when it is possible to have a VFX supervisor physically on set, let alone when it’s all happening remotely.

2. Director Li Zimo loves to scatter light off of different surfaces in his minimalistic designs. In other words, a nightmare scenario when shooting lots of green screen. Generally speaking, green screens and reflective materials don’t mix quite well, which is why it has to be pushed back on the shiny pearl suit for the fencing scene and go for a matte white suit with silver accents.

3. The motion board presented by the director had quite a lot of minimalistic references with only one or two prominent elements that lead the scene. This effectively puts all eyes on the nuances of each shot.

4. To achieve smooth flow of the video and make seamless change from one environment to another, the director planned for a lot of creative transitions already at the step of the initial motionboard. And creative transitions in post need special treatment. To make stitches between shots invisible the team had to make matching camera movement in the shots as well as animation of certain elements.

Our team prepared a 3D layout where we could position all the props, set up cameras, plan actions, and simulate all major character actions on the spot. This allowed us to anticipate almost all of the problem areas and deliver precise camera and lighting instructions to the production team in China.

“Scene worth mentioning is where the woman’s hand was playing with the celestial rings of one of the planets. While the rings were created in CG, it was crucial for the interaction to feel credible and the light play feel realistic. We solved this by shooting a hand against a black backdrop while shining on it with a laser beam," says Paweł Białowąs, on-set VFX supervisor. 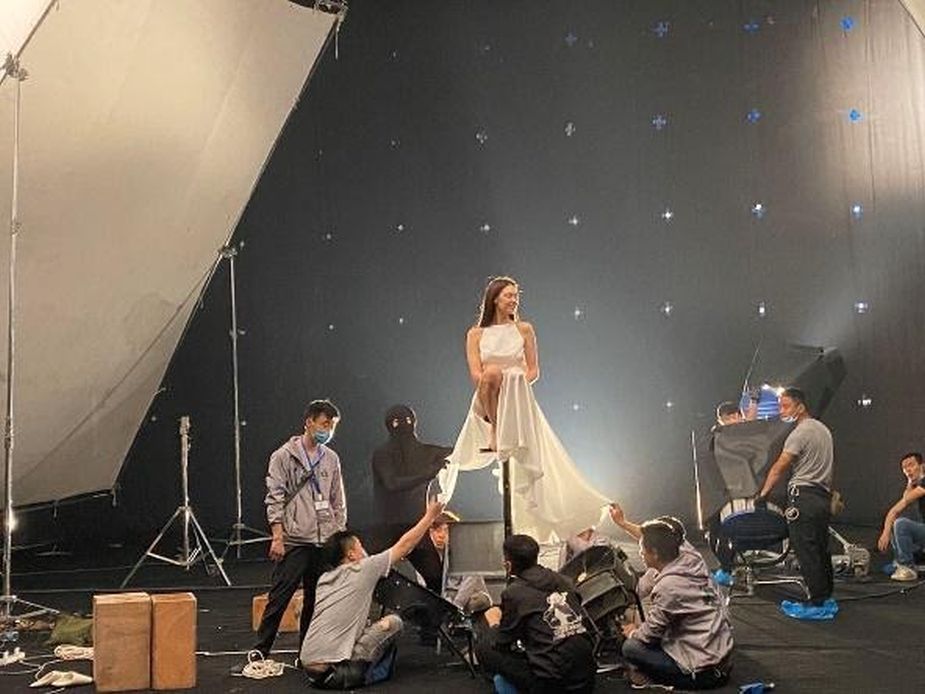 The car was getting constructed in space around our actress.

Choosing a matte white suit with silver trim as the character's costume in the fencing scene was a time-saving compromise. But the actual Buick also had a very reflective coating, which meant that the team had to deal with a lot of green light spillage. Therefore, in most of the scenes the 3D modeled vehicles were used, and only real car appeared in the final roof scene, which completely reduces the problem of pesky spills.

“As for the roof scene, the team must have filled in the missing reflections, so we came up with a solution that uses a large LED screen to project a high dynamic range map of the sky. But due to time constraints, the final plan was to print the sky on a huge vinyl canvas," adds Paweł.

So while this setup worked for the car and its reflection on the floor, we ended up recreating most of the elements in the shot in CG. The glossy floor and water on set simply attracted a ton of unwanted reflections from the white ceiling and the supporting stands.In order to solve the visual challenge, the production team decided to push this dreamworld beyond any physical constraints. Therefore, in order to create the energy ball that envelops the actress, we combined the structural feel of a glass bubble with a golden hair light then surrounded everything by filaments of light reminiscent of coronal-mass-ejections and a touch of Tesla-ball internal lightning.

The VFX team created two light carriers: one that feels more organised and entangled with the hands more freely; the other is more engineered, they outline the outline of the dashboard and then attach to it. The contrast between the display inside the car and the surrounding dark space is like a subtle dance. Because the project team didn’t want this picture to look rough, it added a golden soft light to the display rendering of the car interior, as if it was emitted from the outline, and the display of the operation panel also added a fluid form.

The director also proposed to use the supersonic waves generated by the car as a transition effect. When the sound barrier is broken, one environment will be broken, giving way to another. The director's reference was very clear, but the dark background makes the effect stand out. In an almost near-white environment, the project team cannot rely on classic airflow so they relied on the gray tones in the background and in the car to help the airwaves and to enhance the final effect by distorting the environment.

"Often the decisions made in conjunction between the CGI artist and production specialist, benefit client, and agency, while still delivering on the very tight deadline. And as we all know in today's commercial world, times are not extending but constantly shrinking. Whatever solutions we might have to accommodate that – especially if they are in sync with cost-saving, we believe them to be the future of approach to commercials," said Adam Tunikowski, the CEO and co-founder of Juice.

Looking back to the remote post-producing days, our talented supervisors Olga, Kuba, and Paweł spent grueling nights pouring over previews and sharing meticulous comments on WeChat. At this time no one could dream that the final commercial would look and feel as pristine as it does! but when you have a dream team on board, on both continents, there are very few challenges that can’t be met.

VFX Knights in Shining Armor - Juice on Working with Charlotte Sieling on Margrete: Queen of the North