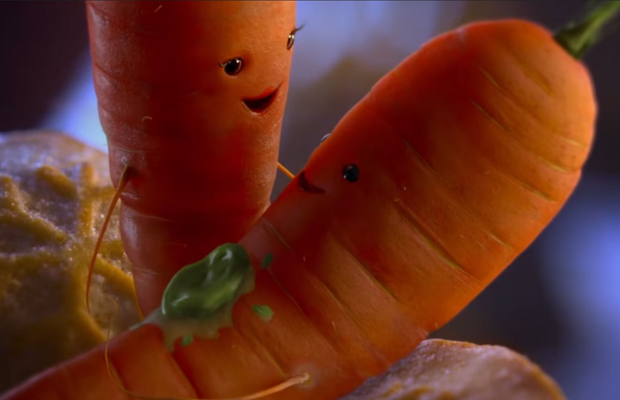 Aldi’s loveable Christmas mascot, Kevin the Carrot, burst onto the British and Irish advertising market in 2016. The supermarket retailer had been gaining a huge share of voice in the market since 2010 and was achieving approximately 45% growth year on year.
Yet, Aldi was struggling to maintain their market share over the Christmas period, with core customers often defecting to more expensive supermarkets at this time of year.
Looking to retain their core customer base over Christmas, the brand and agency McCann were looking to see how they could extend their ‘Amazing Everyday’ campaign to customers who were typically looking to treat themselves over the festive period. Realising that Christmas is the epitome of the ‘Amazing Everyday’, the team sought out an everyday item - the carrot - and made it into something amazing.
Kevin was a roaring success, and since his launch, he’s gone from strength to strength, becoming System1’s third most effective global Christmas ad of all time in 2020 - only beaten by long running ads from Coke and Macys. The spots have racked up numerous awards over the years from UK and Euro Effies to Creative Circle, IPA and MRS Awards.
He’s also grown narratively  – he now has a wife and three children – and his onscreen appearance has evolved too. It’s a great example of how creating a character mascot is such a future-facing decision, as the character stands the test of time by growing up alongside its audience.
Founder of animation company Psyop and director on the spot (alongside Kylie Matulick), Todd Mueller highlights that there’s more to the success than simply opting to make a CG character. “It’s not just enough to have a singing, dancing character. There has to be a story, there needs to be some salt, something compelling for young and old. We’ve created an asset that is extremely valuable to Aldi and that’s another big win in character animation. You’re not just making really successful marketing, you’re actually building value in an asset.”
As well as the TVCs, McCann has been able to create its own social media content with the cheeky carrot. Neysa Horsburgh, managing director at Psyop notes: “The beauty of animation and character is that, while it takes time and resources to create and invent that character, once you have that asset – especially with real-time coming into play – you can leverage those assets in so many different ways across many different platforms.”
To read the full research and story behind the character development, as well as find out how Kevin the Carrot catapulted Aldi’s revenue and market value, sign up to download the whitepaper here.

Why Brands Should Embrace Digital Twins