Florence’s Michael Barth and Kauai Moliterno discuss their captivating film about a white, undocumented bouncer of an LA nightclub with LBB’s Addison Capper 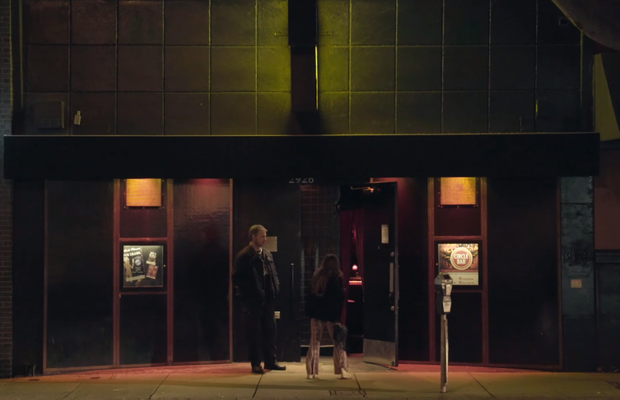 'Steve Is Undocumented' is the story of a white, undocumented - aka illegal immigrant - bouncer of an LA nightclub with hypocritical views on immigration and desires to return to his homeland, the UK. It's also a truly captivating piece of filmmaking that had us saddened when its 10 minutes were up.
Directed by Michael Barth and Kauai Moliterno and produced by Florence, the film sort of plays out in two different styles. There are scenes set in front of the nightclub that Steve presides over. Filmed from across the street but with Steve wearing a mic, they offer an oddly personal snapshot of the rapport, fun - and messiness - of such a setting. The flipside to those scenes are deeply personal snippets of Steve's life away from the door, which unexpectedly result in the capturing of the birth of his own child.
To find out more about how their film came together, LBB's Addison Capper chatted with Michael and Kauai. But before you read the interview, please do check out the film below.

LBB> This is such a brilliant film, and like a doc I've never seen before! First up, who is Steve? How did you find this guy? And why was he perfect for this film?

Michael and Kauai> Thanks! We met Steve at a BBQ. He engaged in conversation with us about his opinions regarding politics and immigration despite the irony of his own immigration status and knowing that we shared differing opinions. There was a tension between his beliefs and privilege which felt worthy of exploring.

LBB> What are the actual foundations of this film? It's about illegal immigration but, obviously, from a different lens to what we're used to in the media. Did that idea come first or Steve? How did it all begin? And why did you want to make a film about this particular subject matter (of immigration)?

Michael and Kauai> We've previously worked on a longer form documentary that involves an unconventional story about illegal and privileged immigration, a significant percentage of the immigration story less often told. Our ears perked when we discovered Steve's willingness to share his feelings unabashed. Beyond that, Steve is an undocumented white British man. As a bouncer of a club, not only does he decide ‘who comes in and who goes out’, but he's also constantly having conversations with inebriated patrons with their filters down. On slow nights, he listens to NPR or other news platforms - so he's far from someone who is "ignorant" or "misinformed" on the issues we would discuss with him. In a lot of ways, Steve pushed us to really look at all angles of our own opinions and look deeper into how to support our differing ideas.

LBB> How did you go about building the narrative around Steve? What was the process like of really getting to know him?

Michael and Kauai> We knew we wanted to capture what life was like for him as a bouncer and have that be the grounded ‘home page’ of the film. Steve is very excitable and curious, he also loves geeking out on tech. The idea of secretly wearing a wireless lavalier mic and getting a spy watch camera was thrilling to him - he was very excited to be a part of the filmmaking process and after 20+ years of witnessing the indescribable happenstances in front of a bar, he was excited to share that aspect of his life as well. We filmed a lot of scenes that were ‘cool’ and highlighting his immense collection of stuff before he found out he was going to be a father. We were filming with him throughout that whole process.

LBB> With regards to his dialogue, was there any guidance there or was it purely his thoughts and conversations? How did you go about capturing what he wanted to say?

Michael and Kauai> That was 100% Steve. We did an interview in front of the bar once but found the organic conversations to be more subtle and telling of his character and situation.

LBB> I love how you've captured the scenes on the nightclub door. I somehow felt more connected to the whole scene and the messiness of it all, despite being further away as a viewer. What was the creative process behind those parts of the film? How did you land on the idea to have that one static camera from quite far away?

Michael and Kauai> The process involved us spending many many hours on the other side of the street from the bar - taking turns listening to the audio and making notes of what was happening. It was all a bit espionage. We filmed all kinds of days - Halloween, New Years, 2016 election day, and eight hours after the birth of his twins. The static camera was a way to really reflect the condensed passage of time and many things that occur within one frame that Steve experiences as a veteran bouncer.

LBB> The sound design of those shots is also really intriguing, and I think it's this that really draws me into what's happening. Can you speak to that a bit more please?

Michael and Kauai> Sound design is one of our favorite aspects of filmmaking. We're both musicians and for us a film doesn't really come alive until there's a proper sound treatment. We were very fortunate to work with an unbelievably talented sound designer, Jesse Herrera. In a lot of ways, we wanted the sound to reflect the ‘cool badass’ that Steve presents himself as.

Michael and Kauai> Again, he loved using the camera toys. He really overshot the birth scene in a way we were not expecting at all. We also became close to his girlfriend and were welcomed to film with them in the hospital (we gave them a lot of great footage that was never intended to make it into this film). A lot of conversations happened throughout the filmmaking process about what Steve felt comfortable including into the film. We are very proud to say that Steve loves the film, he only had one request when we showed him the cut which was to extend the length of the clip where he completes his weightlifting competition - which we honoured :)

LBB> Despite that, I'm not sure we ever really see Steve's face. Is that correct? Why?

Michael and Kauai> You probably could see his face if you tried. We intentionally wanted to give anonymity to him as a white undocumented bouncer. There was also the uncertainty of whether he would actually move back to the UK or not, so we wanted to protect his identity if he were to remain in the States.

LBB> The narrative arc and some of the transitions from scene to scene are so good. What was the edit process like?

Michael and Kauai> Gruelling. We have so many unbelievable moments captured in front of the bar that had to be left on the cutting room floor. There's definitely another feature length film that lets some scenes really unfold and play out in real time - from moments of pure bliss and love to the most toxic side of humanity, it all took place within that frame and was very strenuous to whittle down to what served Steve's story.

LBB> And from an aesthetic point of view, what were your main aims and ambitions with the look and feel of the film?

Michael and Kauai> We just wanted the film to stylistically reflect how Steve sees himself and juxtapose that with the banality of the exterior of the club.

Michael and Kauai> This is going to be cryptic but we filmed some truly unbelievable scenes with Steve and his illegal hobbies that we ultimately had to remove from the film in order to protect his anonymity. It was difficult to let them go.

Michael and Kauai> Stay hydrated, wear sunscreen, and be tolerant. Thanks for reading 🐬