The exclusive partnership with Channel 4, in line with the brand’s #LoveBeatsLikes campaign, explores how friends and family can be there for mums through a new comedy film starring three of the UK’s leading female comedians 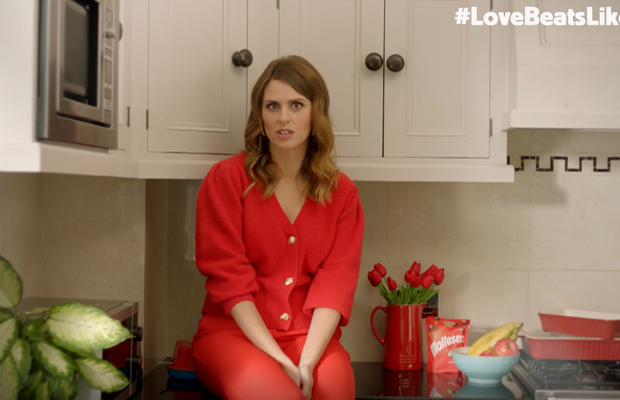 The comedy short complements the brand’s wider #LoveBeatsLikes campaign created by AMV BBDO, which aims to encourage the support network around mums to go beyond social media likes and to properly check in with the mums in their life.

The wider campaign sees the Mars Wrigley owned brand team up with partners such as Black Ballad and Gay Times to communicate and share the message. Both platforms were selected by Mars Wrigley's media agency, MediaCom, using their inclusive planning process, which focuses on authentically communicating with diverse audiences. Influencer partners Dr Zoe Williams and Chessie King – who are new mums themselves – also created content to spread the word.

Late Night Feed, the social-first film from 4Studio will live across Channel 4’s YouTube, Facebook and Instagram channels. Bespoke edits of Late Night Feed will form a new linear TV ad that is set to debut on Channel 4 on Friday 19th November and air across the broadcaster’s network.

This phase of activity is an extension of MALTESERS support of maternal mental health, as it follows #‘TheMassiveOvershare’ campaign as part of its multi-year partnership with charity partner Comic Relief.

Late Night Feed taps into MALTESERS’ long-standing purpose of uniting people through the power of friendship and laughter, and showcases Channel 4’s support for maternal mental health as the content explores the complexities and spectrum of emotions surrounding the topic.

Leading the series is Ellie Taylor, stand-up comic, broadcaster and actress, whose debut book on the candid truth of motherhood, My Child and Other Mistakes: How to Ruin Your Life in the Best Way Possible, recently became a Sunday Times bestseller. Ellie makes light of common mishaps as mum to a newborn whilst discussing the lows she has faced as a first-time mum alongside comedians Athena Kugbleunu and Jessica Fostekew.

Speaking about the partnership, Leah Dyckes, MALTESERS brand director said: “We saw a fantastic response to The Massive Overshare earlier in the year from mums that inspired this second phase of the campaign in really asking the networks of new mums to show up and show some love in being ‘their village’

MALTESERS has always been a brand of which humour and lighthearted female conversation is at its core and by laughing together, through the Late Night Feed comedy short with Channel 4, we hope to have highlighted the full spectrum of emotions that motherhood brings through the first hand experiences of these three incredible women.

We’re thrilled to be working with Channel 4 who share our joint belief that maternal mental health needs greater and more widespread understanding, and through our creative content, hope to bring to life the need for meaningful connections and support for the new mums out there”

About taking the brand platform, Jeremy Tribe and Dave Westland, creative directors at AMV BBDO, said: “Social media has culturally become an expedient way to show support, but we hope to burst that bubble and encourage people to do a little more than “like” mums’ social posts. Creating an idea like #LoveBeatsLikes, which needs to exist cohesively through channels ranging from social to influencers to media partners, is a new way of working. So, it’s been a pleasure to see how our partners have pushed our campaign into a multitude of different channels. To continue the motherhood theme, if this campaign is our baby, then these partners are the village we need to help raise it”.

David Amodio, deputy head of digital innovation and 4Studio said: “Late Night Feed is a great example of Channel 4’s integrated approach to innovating with like-minded brands through 4Studio, helping them to tap into our highly engaged young audience with quality, entertaining content wherever they’re watching.

Maltesers is a long-standing trusted partner when it comes to purpose related marketing, having been the first ever winner of our Diversity in Advertising Awards. This new partnership focuses on another important issue close to our heart.’’

Evie Buckley. digital commissioning executive, Channel 4 said: "Working with Maltesers and Afro Mic on a campaign of this nature has been a real joy. Humour is such a great way to land an important message and it’s been brilliant to creatively get behind it."

MALTESERS has been raising money for Comic Relief for over ten years, and this year they are working together to support maternal mental health projects in the UK. Comic Relief has supported work in this area since 2010 by funding organisations that aim to reduce social isolation and help women and families across the UK and across the world to access specialist support. For more information on the partnership, visit comicrelief.com/maltesers.